.Mid-Week Menu: Box and Bells Starts Brunch Service, Bites in Uptown and the Berkeley Southside Off the Grid Get the Axe, and Alice Waters Wants to Bring Edible Schoolyard to the UCs

1) Rockridge’s weekend brunch crowd should note that a big-time player is entering the scrum: Box and Bells (5912 College Ave., Oakland) will launch weekend brunch service at the end of the month. Starting on Saturday, March 29, the restaurant will serve brunch from 10:30 a.m. to 2 p.m. on Saturdays and Sundays.

Syhabout told What the Fork that he’s yet to finalize the brunch menu, but that the food offerings won’t be quite as heavy as they are for dinner. (To be fair, just about anything in the world would be less heavy than dinner at Box and Bells — and I say that with the utmost affection.) Likely dishes include a Spanish tortilla made with French fries instead of regular potatoes (“like a French fry pie,” Syhabout said), a take on biscuits and gravy, a Swedish-style cinnamon roll with cardamom and pearl sugar, house-made granola, and an assortment of grain-based salads (e.g., farro with dried fruit). There will also be brunch cocktails and oysters on the half shell. Pastries will run you $6; brunch entrées should cap out at around $16. Box and Bells won’t be accepting reservations for brunch service, so seating will be first-come, first-served.

Syhabout noted that a Friday-afternoon happy hour is also on the way, starting Friday, March 28. From 4:30 to 5:30 p.m. each Friday, before dinner service starts, the restaurant will serve slightly discounted (mostly $1 off) beer, wine, and cocktails. A small selection of bar snacks — pâtés, rillettes, and such — will also be available.

2) According to Berkeleyside Nosh, a new barbecue restaurant called Perdition Smokehouse (2050 University Ave.) is coming to Berkeley, replacing short-lived Amadeus, which last occupied that space. Inside Scoop has a few additional details about the project — most notably that the owner is Chuck Stilphen (of The Trappist and Mikkeller Bar), so it should come as no surprise that an extensive beer program is in the works. Look for a June opening.

3) Inside Scoop has an update on urban farmer Abeni Massey’s long-awaited downtown Oakland restaurant, Township (1542 Broadway), which now looks set to open in early May. The hyperlocal restaurant will feature a rooftop garden, eggs from chickens raised in West Oakland, and cocktails by Crystal Wilnos, who previously worked at Plum Bar. 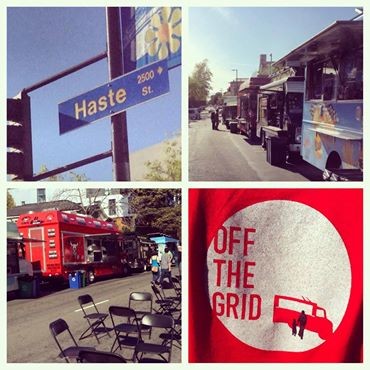 4) Berkeleyside Nosh reports that the folks who run Off the Grid have given the axe to the mobile-food behemoth’s Southside Berkeley market, which, up until last week, had taken place on Monday nights at the intersection of Haste Street and Telegraph Avenue. Off the Grid proprietor Matt Cohen cited a lack of business at that particular OtG location, making the spot “not financially viable” moving forward.

5) Meanwhile, in other food-truck news, Bites Off Broadway founder Karen Hester tells What the Fork that her new — and, as it turns out, short-lived — First Friday initiative, Bites in Uptown, has also been squashed permanently. The news comes after a meeting between various stakeholders that took place last week. In an email, Hester attributed the decision to a combination of public safety concerns on the part of the Oakland police, concerns about competition on the part of the KONO business district, and what she termed “a lack of support for something new at First Fridays.” She hopes to revive the project at some point in the future, but for now it looks like it’s dead in the water.

6) On a happier note, the North Berkeley BART station location of Off the Grid, which sets up every Sunday from 5-8 p.m., is doing an interesting collaboration with the Berkeley public library system. In April, during each of the North Berkeley Off the Grid events, the library will set up a mobile hotspot “pop-up” through which anyone attending will be able to use their mobile device to access free e-books, magazines, and streaming music. Eat street food, and read a book — sounds like a winning combination to me.

7) Oakland’s Uptown Juice Company is raising money to complete construction on its newly leased production kitchen in Uptown Oakland. If you’re a fan of owner Janice Yenpasook’s cold-pressed juices, you might consider chipping in to her Kickstarter campaign, which has twelve more days to hit its $25,000 target. 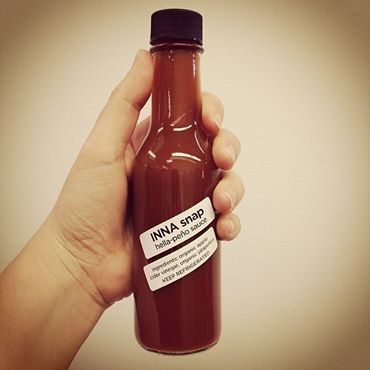 8) This Saturday, March 22, from 10 a.m. to 2 p.m., INNA Jam is hosting a spring social at its allergen-free commercial kitchen headquarters, at 1307 61st Street in Emeryville. Jam-maker-in-chief Dafna Kory will be giving out samples of her newest seasonal jams and shrubs, and she’ll also debut her newest product: the “INNA Snap Hella-peño” sauce, a hot sauce made with only two ingredients — organic jalapeño peppers and organic apple cider vinegar. Kory describes the hot sauce as being “like a Southern hot pepper vinegar, but with more pepper.” There will be a hot pepper relish as well.

9) Modern Farmer has a big scoop: the preliminary details on the University of California’s plan — yet to be formally announced — to bring a broad-ranging Edible Schoolyard-like curricular program to all ten UC campuses. Apparently, Alice Waters advised UC president Janet Nopolitano on the plan, but it seems Waters jumped the gun in announcing the initiative at an Edible Education class at UC Berkeley earlier this week. Stay tuned.