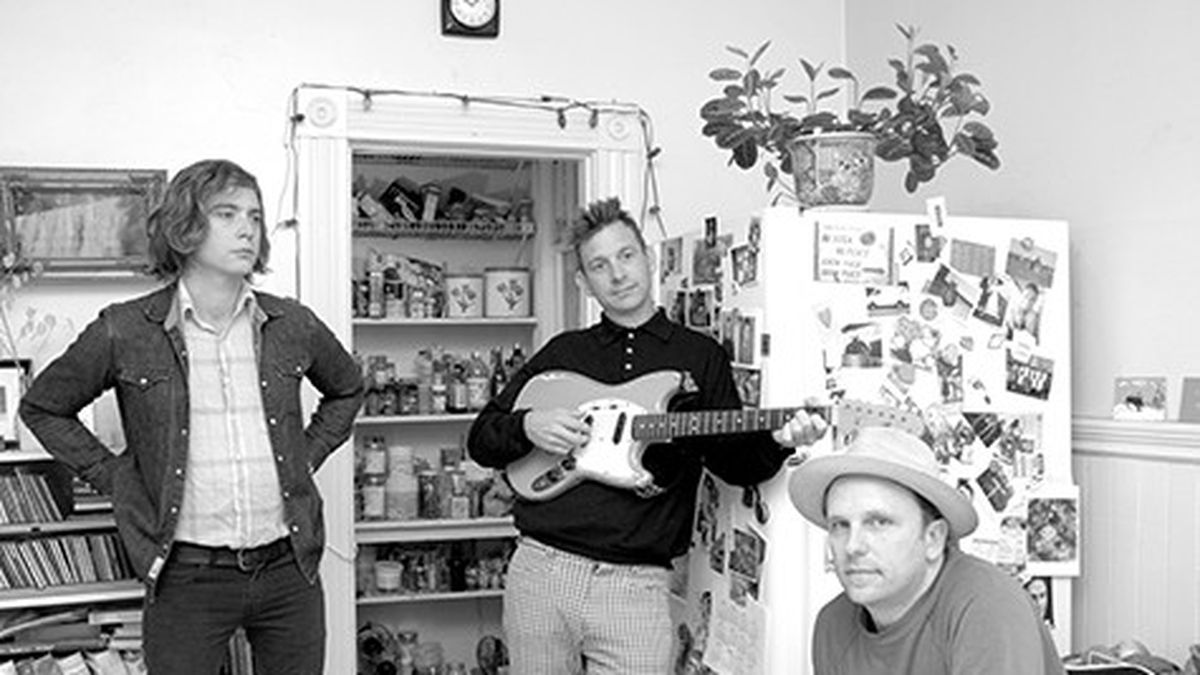 In spite of the elite's tokening gaze, Sonny & the Sunsets sounded good at The Battery.

In a neighborhood in which every other building’s renovated façade appears to enclose a private club, The Battery is the one with the valet parking out front. Blue lights shine up from the sidewalk and match the Uber emblems visible on the dashboards of the black vehicles idling in the street. Inside the one-year-old club, members of the wry local pop outfit Sonny & the Sunsets were eating complimentary olives and popcorn in an improvised green room. The décor featured a zebra print rug, brown and red leather chairs, and groovy screen-prints, suggesting an annex for the leftovers of four or five uniquely garish rooms.

Down the hall, in a room called The Library, in which vintage scuba gear and rustic wooden shelves storing an arbitrary selection of old books amounted to a tawdry take on old-world charm, Sonny & the Sunsets settled behind their instruments in a corner to play for an exclusive crowd. Sonny Smith, the bandleader, introduced a new song by saying, “This one is about a plot to destroy the underground.”

Founded by Michael and Xochi Birch — one of Michael’s successful startup ventures includes the social network Bebo, which AOL bought for $850 million in 2008 — The Battery is an exclusive club. First, the couple selected twenty members, who recruited an additional one hundred, each responsible for finding two more. Prospective members must wait for an invitation, which The Battery’s homepage describes as “coveted.”

Appearing before San Francisco’s entertainment commission last year, The Battery’s then-general manager Tex Doughty explained why the Birches created the club: “The clubs that are here now are very old-school and fairly outdated.” The Battery’s solution to San Francisco’s backwards nightlife is a five-level, 58,000-square-foot complex featuring a taxidermy-laden restaurant, hotel rooms, several bars, a gym, and a spa, among other luxuries. Some of the rooms are connected by secret passageways.

For a private club catering to the city’s elite, The Battery isn’t unique. While the décor is moneyed, it’s not inventive. The most surprising feature was perhaps the upstairs restroom. Each fully enclosed stall displays door plaques announcing one of the seven deadly sins, with an accompanying illustration.

The Battery’s exclusivity isn’t necessarily objectionable. Secret clubs abound, sometimes in the form of scrappy, illicit gatherings in warehouses that just style themselves as countercultural outposts. A Battery regular would feel as out of place at one of those as I did there — if they got in. But while The Battery is clearly a networking hub for self-appointed maverick technologists and their aspirant cabal of influence, Michael Birch presents it differently. “A private club can be the city’s replacement for the village pub,” he told the San Francisco Chronicle earlier this year in a fawning article. “I view it as us trying to curate a community.”

To that end, The Battery has made inroads with the art world, partnering with gallerists to exhibit contemporary work in the hopes of fostering arts patronage. In a year when many local galleries have shuttered, the number of newly wealthy tech workers buying art appears to have shot up. New money has discovered the accessorizing pastime of old money. The alignment of fine art and wealth isn’t particularly surprising, but The Battery’s music programming is more problematic.

This year, countless thinkpieces — and even protest songs — about San Francisco’s musician exodus in the face of skyrocketing rent and inhospitable new neighbors have appeared. To deflect criticism from beleaguered local musicians — whose haunts, homes, and venues are disappearing — certain corners of the tech industry are inviting bands into company headquarters and private clubs for occasional live sessions. Don’t demonize us, the thinking goes — entertain us.

Certainly, many bands welcome the gigs. But that night, as drummer Ian McBrayer put it, felt more like a “dog-and-pony show.” The Battery offered the band 35 guest list spots, which McBrayer likened to asking for “extras in a movie scene.” He continued, “They want a bunch of people from the Mission [and] Oakland to lend a sense of authenticity. … Their shows are more about working on The Battery’s image.” (Representatives of The Battery didn’t return requests to be interviewed about the club’s music programming.)

McBrayer said that his residence in the city was precarious. Sonny & the Sunsets’ bassist, Shayde Sartin, is a longtime employee at Amoeba on Haight Street who now commutes to work from Alameda. McBrayer, who noted feeling conflicted about speaking against The Battery as a professional musician, said that being honest about the patronizing dynamic was more important to him. Indeed, it’s condescending to parade displaced musicians and their friends before a wealthy audience for credibility and edge.

But The Battery might call it fostering diversity. Attending as a guest of the band, I was presumably part of Birch’s people-curating project. The gall of electing oneself to prescribe community and diversity is appalling. Besides, it doesn’t really work. There wasn’t much commingling of band guests and full-fledged Battery members, unless the latter felt compelled to tell the former how to behave.

A stranger approached me at one point to say, “Cellphones are really frowned upon here.” I was on Twitter following the Ferguson protest in Oakland, which literally passed my block, but the explanation didn’t assuage the policing impulse of my critic. The exchange underscored another one of The Battery’s ironies: “customary” disallowance of electronic devices in a clubhouse for people hedging bets on the proliferation of electronic devices.

As for whether The Library is even a good room to watch a band play, it’s hard to say. The McBrayer and Sartin rhythm section dealt spare, mid-tempo rock grooves beneath Smith’s scratchy, fickle guitar style. Smith’s chord progressions resolve neatly, but he tends to deliberately drop out or scurry his picking hand up and down the guitar neck. In this case, it lent the songs an askew, playful quality, which was reinforced by Smith’s sardonic vocal delivery and flat introductions.

The quality of Sonny & the Sunsets’ newer tracks boded well for the group’s upcoming full-length, Talent Night at the Ashram, in spite of the disengaged and chilly atmosphere at The Battery. There’s a reason that the group’s upcoming shows at Amnesia, one of those “old school” and “outdated” clubs that The Battery endeavors to usurp, are being recorded for a live album: It’s a venue that became part of the local music community naturally, not through calculated clientele-curating and strategic guest list allotments to provide some token musicians for the elite to gawk at.

Plenty of musicians regard corporate gigs and private parties as amusing experiences, happily done for a reasonable rate and some added perks. Early on in the evening, McBrayer joked about looking forward to enjoying a free filet mignon after his set. But the novel appeal of a posh meal wore off. He skipped the beef and went home.