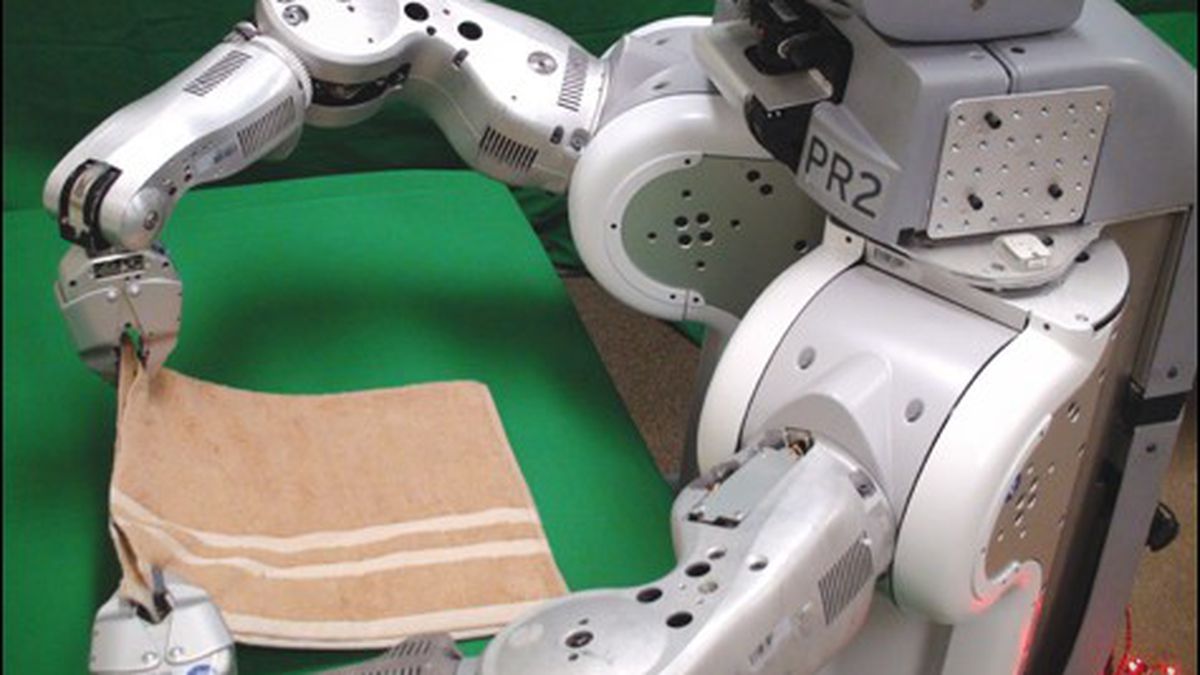 Cal researchers have developed a robot that will fold your towels perfectly — every time.

Robots travel through space, perform surgery, and build cars. But they’ve never been able to reliably fold towels — until now. Researchers at UC Berkeley’s Department of Electrical Engineering and Computer Sciences have developed a robot that successfully folds towels fifty out of fifty times, raising hopes — and fears — that robots will some day take over our simple household chores.

The breakthrough came when associate professor Pieter Abbeel and doctoral student Jeremy Maitin-Shepard created the right algorithm. “I suppose some people enjoy folding their own laundry, but some people don’t,” said Maitin-Shepard, a 23-year-old who earned his undergraduate degree at Carnegie Mellon University. “You can hire a maid to do it, but at some point, you will be able to have robots perform these tasks.”

Along with a couple of undergrads, the pair tested their algorithm on an open-source robot called the personal robot 2 (or PR2) created by Willow Garage, a Menlo Park robotics company. The robot stands five feet four inches tall and has a pair of arms, a body, and a set of cameras where its head should be. It sort of looks like a robotic E.T. With pincer-like claws, it’s able to pick up towels from a pile of laundry, find the corners, and fold it in half twice. The towels come in all different shapes, colors, and sizes, but in the end, the robot is able to create a nice, neat folded stack of laundry.

According to Abbeel, the breakthrough was significant because the robot has to perceive and manipulate a “deformable object,” or an object that changes shape. Unlike other robots, this one does not complete the same exact task repeatedly. Rather, it modifies its response based on the towel. Some towels are lumped up in a ball, others are splayed. It’s a big step forward in the world of robotic perception. “Most robots do exactly the same task for their entire lifetime,” Abbeel said. “It’s a significant achievement to get robots to do things in unstructured environments. The robot has to act upon changing situations.”

No doubt today’s robots complete impressive tasks. Telerobots, or robots manned by humans, have explored volcanoes, combat zones, and the wreck of the Titanic. There are even household robots that can vacuum, mow the lawn, and dispense food for the cat. But an autonomous domestic robot that can juggle several complicated tasks is still mostly relegated to the realm of science fiction (think Rosie the Robot Maid from The Jetsons).

Though mechanically sophisticated, existing robots often lack the ability to understand and interact with their surroundings. “Traditionally, robots used in factories are in very controlled environments that sometimes require no — or very limited — perception,” Maitin-Shepard explained. Such robots rely on human intervention to both maintain the environment and help the robot when it malfunctions or can’t understand its surroundings. Maitin-Shepard’s robot, by contrast, doesn’t need humans to fold laundry.

But don’t fire your housekeeper just yet. The robot takes a whopping 25 minutes to fold each towel. In other words, a useful domestic robot still appears to be several years off. Nonetheless, it’s not the speed of the robot that matters; it’s the skill of the robot, according to Keenan Wyrobek, co-director of the personal robotics program at Willow Garage. “The challenge was making it happen at all, not making it fast,” he said. “We can always make it faster. … Now we need to turn it into something useful.”

Inspired partly by the UC Berkeley team’s achievement, Willow Garage has decided to put eleven PR2s in the hands of eleven research teams worldwide, for two years. The teams will get to use the robots for free to develop their own systems, like the towel-folding algorithm. Combined, the robots are worth more than $4 million. “Look what happened with one grad student, using one of our robots for one month or two,” Wyrobek said. “This program is two years long, with ten more teams and ten times as many students. We’re going to see ten and ten times ten.”

The teams, chosen from an application pool of 78, represent some of the best in the personal robotics field. Proposals include the “tidy-up robot” from the University of Freiburg in Germany, which will eventually clear the table and open drawers and refrigerators. Stanford University plans to create a robot that identifies objects, retrieves items, and navigates a building on its own. The University of Southern California proposed a robot that pours liquid into a cup.

The UC Berkeley team plans to work on a robot that eventually collects a load of laundry, sorts it, determines the wash and dry cycles, retrieves laundry from the machine, and folds it. That breakthrough is many years in the making, according to Abbeel. But it’s possible.

But the advance of technology inevitably follows with the question: Should we create such a thing? Should we create a robot that cleans up after us? The robot, after all, could potentially replace a whole class of people who work in domestic services. And even for those of us who do not have a maid, such a robot might encourage slobbery and laziness.

Researchers, however, say it’s not a matter of replacing humans, but rather making them more productive. Robots that can perform tasks around the house could also prove invaluable for people with disabilities or degenerative diseases that limit mobility. Software applications in the works allow people to point at a light switch or an object on the floor, to which the robot responds by flipping the switch or retrieving the object, Wyrobek noted.

Take that one step further and imagine the ability to interact with the physical environment in the same way we use computer search engines. Wyrobek said that one day, we may be able to say to our robot: “Give me the stack of papers that was sitting on my desk two weeks ago.” Or, “Give me all the files with the word robo-maid.” And our robot will physically retrieve them.

Though the idea of a robot that looks and acts like a human may freak some people out, there’s no stopping the march of technology. Wyrobek relayed the anecdote of his neighbor who used to keep books the old-fashioned way — that is, by hand, without computers. Then came her inevitable transition to modern bookkeeping. “It was a disruptive thing for my neighbor,” he said. “But she didn’t lose her job. She learned how to use a computer. There will be a lot of changes. It will happen slowly over decades, but at the end of the day it’s going to awesome.”

And Now for Something Completely Different

Update on the Oaks Card Club: 15 Indicted on Charges of...