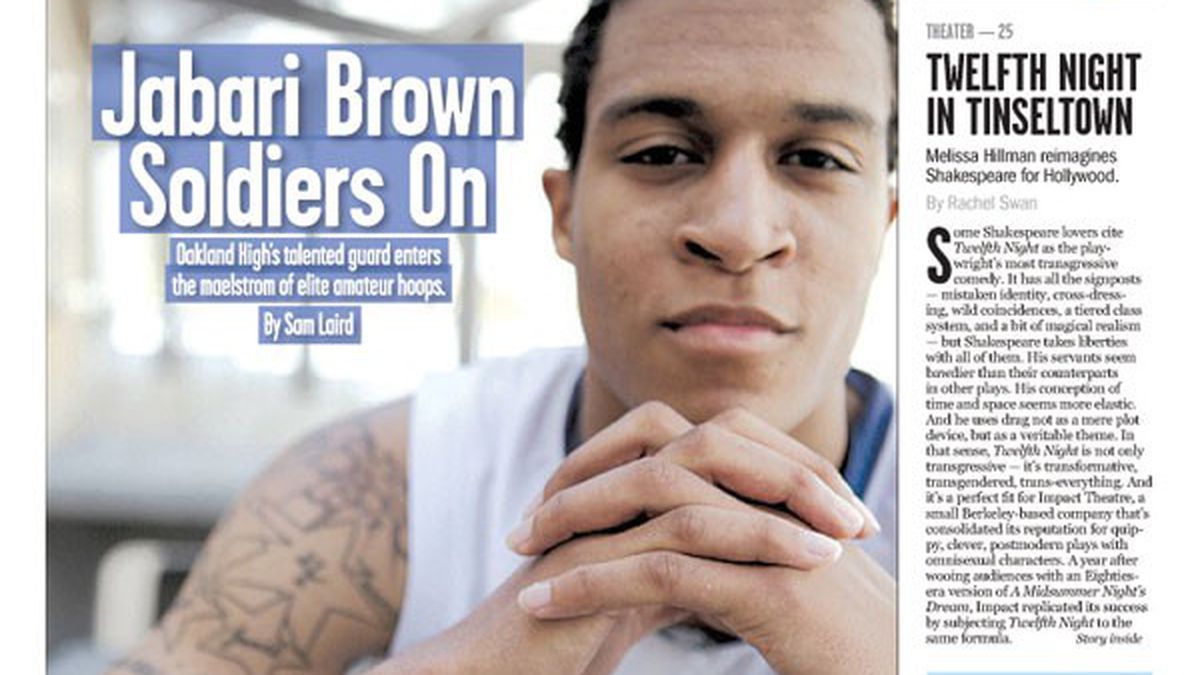 As Readable as Wikipedia

The rather oblique letter that ran in this week’s print edition does make a good point: bold-face type in the midst of a feature article is distracting to the point of annoyance, and serves no useful purpose. Please dump it, and throw in some subheads and/or pull quotes if more visual interest is needed; the Jabari Brown piece looks like a Wikipedia entry with photos, only less readable.

With regard to the article about economist John Williams in the May 5-11 issue: So what else is new? Common sense tells us that the word that describes someone who has been unable to find work and has given up and entered the alternative economy, for instance by begging, that we see so much more of, or by playing street music as I do, is unemployed, as well as poor. Also when a news medium reports that the price of such and such a necessity of life has risen faster than inflation, we yell at the page or screen, “Idiot, that IS inflation.” The whole thing can be summed up, without resort to statistics, by the two-word phrase used by Minneapolis graphic artist Ricardo Levins Morales in one of his posters and by Bay Area singer and songwriter Jon Fromer in one of his songs, “Capitalism Sucks.”

Exactly Who Was Playing the Race Card?

Bob Gammon‘s article makes a number of errors that should be corrected.

In the article, Gammon appears to vilify Kaplan by using race and political expediency as the only reasons for her vote to deny the citizen appeal of the Planning Commission’s decision to grant a continued alcohol beverage permit to Nik Nak Market (Jo Jo’s Convenience Market).

In the article, appellants Don Link and Jeffrey Jensen suggested that Kaplan (an exploratory candidate for mayor) was “pandering for black votes” should she become an official candidate for mayor. The bringing in of race by Link and Jensen in a distinctly non-racial issue appears to be an attempt by these two citizens to inflame the situation in order to do exactly what they have accused Kaplan of doing: that is, to play on fears by non-black residents of Oakland that African Americans in the city are getting a special deal.

The facts in this matter are far different. First, many African-American communities and politicians have been in the forefront of the drive to remove “problem” liquor outlets from their neighborhoods. That is because, in years past, the city council allowed many “problem” liquor outlets to operate without restraint in many African-American neighborhoods. Therefore, an Oakland politician risks losing as many black votes as they might gain in supporting the granting of the Nik Nak liquor permit. Second, the Nik Nak (Jo Jo’s) market is not — and has never been identified as — a problem liquor store, the type of problem the Oakland ordinance is specifically designed to get rid of.

Ms. Kaplan’s vote is supported by the Planning Commissions guidelines that are used in granting or denying a use permit:

1. Whether the business establishment is nuisance (does not apply to Jo Jo’s Market).

2. Overconcentration of liquor licenses in the designated area, as defined by the Planning Commission (does not apply to Jo Jo’s Market).

3. High crime statistics in the geographical vicinity as defined by the Planning Commission (does not apply to Jo Jo’s Market).

Further, Councilmembers Larry Reid and Desley Brooks — who voted along with Kaplan to support the Jo Jo’s liquor license, have both been in the forefront on the council in trying to remove “problem” liquor outlets from the city and from their districts. The fact that they supported the Jo Jo’s application should be taken as an indication that they, and Kaplan, saw the Jo Jo’s situation as distinctly different from “problem” liquor outlets, and voted accordingly.

These facts should have been highlighted in the Gammon article, instead of the inflammatory remarks by the two appellants regarding “racial pandering.” But Gammon seems to have believed Link and Jensen, slanting his article in favor of their racial allegations of Kaplan’s motives. That is seen by Gammon’s identification of Larry Reid as black in his article, while not identifying the race of any other councilmember. This is a not-so-subtle way by Gammon to imply that Reid’s only reason for supporting the Jo Jo’s application was that Jo Jo’s was being supported by several prominent black political leaders in Oakland and, therefore, Reid fell in line with those black political leaders. This is just flat-out anti-black racism, because there was no indication in the article of the race of the other councilmembers, or suggestion in Gammon’s article that the four councilmembers who opposed the application were doing so only because there were a number of white political activists on that side.

Councilmembers Nancy Nadel and Jean Quan (an announced candidate for Mayor) also failed to explain their vote in support of granting the appeal. Is the reason for Quan’s vote to pander to the white votes for her mayoral bid?

It’s to the discredit of Link, Jensen, and Gammon that they didn’t admit this in their statements or the article, and ended up slandering the owners of Jo Jo’s Market and the many citizens who took their side, including Councilmembers Kaplan, Brooks, and Reid.

Although our article identified the race of no less than six people involved in this dispute, including several councilmembers and community activists on both sides of the issue, in hindsight we could have been more evenhanded in that regard.

I’ve never written a letter to a paper before, although I’m an adamant reader — the EBE is one of the best local papers of all the places I’ve lived. It’s because I respect your conscientious attention to all the wonderful goings-on in the East Bay, as well as your dedication to “promote truth, expose wrong-doing, and give voice to the voiceless,” that I’ve decided to write to you today.

I’m really disturbed by the fact that you have taken on advertisements for Camel cigarettes and SNUS, products that warn, inline, that they cause lung and gum disease and tooth loss. Not just little ads either, full-pagers and coupons! I love all your articles about healthy lifestyles — biking, yoga, eating well … and I was just so shocked by these ads! I have a little brother, he’s 17, and he gets a real kick out of reading your stuff. He’s a smart kid, I don’t reckon he would see an ad for this crap and make a dash down to the corner store, but I hope you see my point — who needs to see this crap?

I guess what I’m really asking is — is it really necessary for you guys to contribute to this multimillion-dollar death campaign? Don’t you feel at least a little hypocritical?

Thank you for your time, and thank you for all of your excellent stories, they make me proud to live here. With hella love.