The emerging singer's debut EP, The Story of Right Now, showcases her impressive vocal chops and gift for nuanced storytelling. 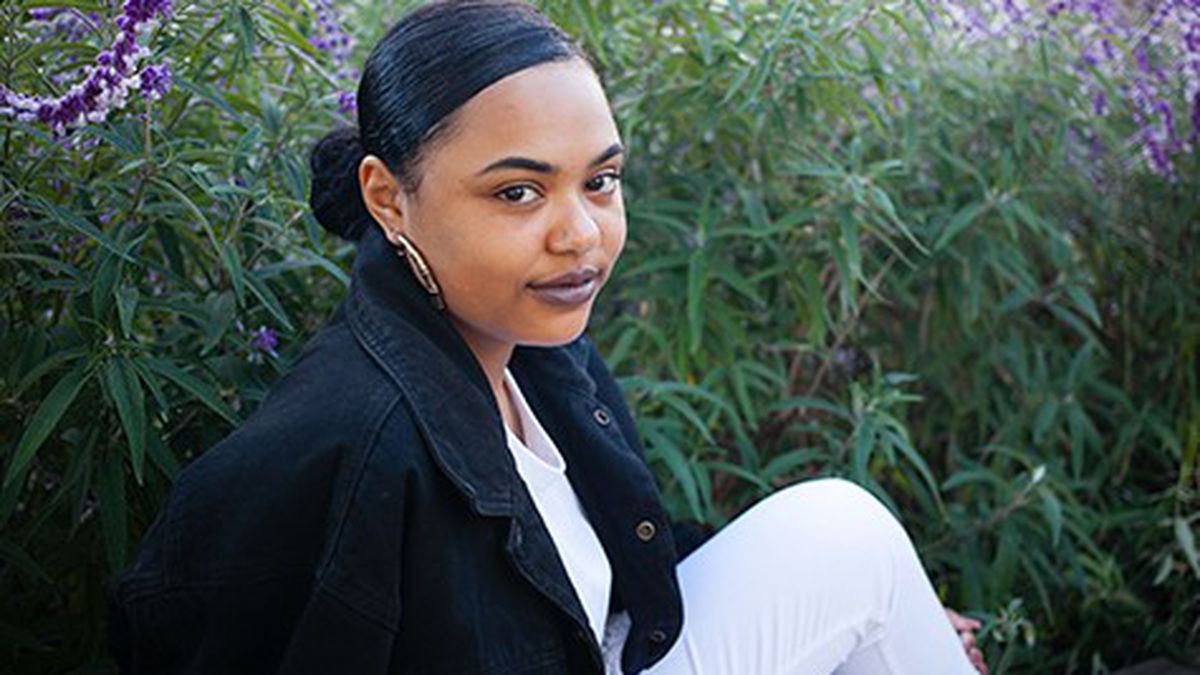 In Samaria’s new short film, “The Story of Right Now” — which is actually a music video for the first two tracks off her recent EP of the same title — the Oakland R&B singer cruises down the dusty road of a desert landscape. She’s dressed in all black with a bandana over her face. Her love interest is in the driver’s seat: a bad boy with neck tattoos of roses and a side-swept Skrillex haircut.

As ominous violin chords creep slowly over the beat’s rattling high-hats and sinister piano, the screen flashes with scenes showing Samaria’s character falling passionately in love. However, she quickly finds herself entrenched in her boyfriend’s dangerous lifestyle in ways that she didn’t expect: Papi told me he committed to the game but he could make time, she sings forebodingly in her soulful, smoky timbre. Moments later, we see Samaria’s character swept up in a heist that ends in tragedy. He got my heart in one hand/And my soul in the other. Her delivery poignantly conveys a combination of powerlessness in the face of temptation and frustration with herself.

When I met the nineteen-year-old artist at Café Roma in North Berkeley, just down the street from her grandmother’s house where she spent much of her youth, she looked quite different from the reckless girl she portrayed on camera. Effusive with an easy smile and goofy sense of humor, she mentally prepared for the Express photo shoot as we waited for the arrival of our photographer. “I like to call myself an awkward turtle,” she laughed nervously.

Samaria has a gift for storytelling through ballads, and The Story of Right Now is flush with nuanced, emotive songwriting that shows the singer inhabiting different characters — a talent that’s evident in her believable acting in the short film. Though her lyrics throughout the EP are from a first-person point of view, she often treats her songs like works of fiction that allow her to explore different psychological states she hasn’t necessarily experienced first-hand.

As someone who’s barely out of high school, Samaria said that she’s only been in one serious romantic relationship. But her songs demonstrate an emotional breadth that’s rare to see in a songwriter her age — a skill she said she developed by writing from the points of view of different friends and family members who have confided in her, as well as movie and TV characters.

“If you allow yourself to be emotionally wrapped up in something else, the songs will still come out great, but it’ll be different because it’s not from my own experience only,” she said. “As anybody doing something creative, it’s very important that you find inspiration in something other than personal experience, which is why a lot of the musicians and artists I look up to have traveled the world to get an album finished. Beyoncé did a whole [EP] in Spanish — that’s crazy to me.”

“Antisocial,” for instance, is one such song that Samaria said comes off as autobiographical but isn’t: She actually wrote it for a friend who deals with social anxiety. And while Samaria describes herself as a social butterfly, she used the track to explore an introvert’s headspace: Babe, I promise that I am okay/But I just be having my days where/I simply don’t have shit to say/Please, don’t take it personally. Like much of the production on The Story of Right Now, the song’s beat slowly builds tension, with jagged piano chords falling like broken glass over an undulating rhythm that evokes Aaliyah and Destiny’s Child.

The Story of Right Now is an impressively strong debut, and Samaria is already being hailed as a rising star. Being a member of Kehlani’s music collective Tsunami Mob has certainly added to her buzz (she and Kehlani, who is a year older, have been friends since middle school). The FADER, arguably today’s most influential music publication, premiered Samaria’s short film on its blog. She’s opened for prominent artists such as Washington, D.C.’s GoldLink, whose album And After That, We Didn’t Talk recently rose to popular acclaim with its savvy combination of hip-hop, funk, and go-go. And already, several labels have made Samaria offers — though she said she won’t settle on a record deal until she feels like she’s matured enough as an artist.

For now, Samaria is building a tightly-knit circle of collaborators that she can be sure have her back. She’s developed a close relationship with the producer, engineer, and trumpet player DTB, who made the majority of the beats on The Story of Right Now. DTB’s bass-heavy yet atmospheric production utilizes the rhythm structures of the Nineties and early-Aughts R&B that Samaria emulates, yet adds oceanic electronic effects that evoke experimental producers such as XXYYXX and Clams Casino. Dark string arrangements color the project throughout, underscoring Samaria’s downcast lyrics about heartbreak. One of Samaria’s ambitions is to perform with a live band, and DTB, who played the sinewy, screechy trumpet riff at the beginning of “Antisocial,” plans to accompany her on tour with his trumpet when the time comes.

Now that Samaria’s platform is growing, she finds her fans, many of whom are teenage girls, looking up to her as a role model. She said that growing up, she struggled with self-acceptance. But now that she’s older and more confident (practicing mindfulness is her secret to maintaining her buoyant, easy-going attitude, she said), she hopes to send her fans the message that there is hope beyond even the most trying experiences of adolescence.

“I was always bullied because I wasn’t afraid to be different,” she said. “So I want young girls to know it’s okay to be yourself, and whatever it is that they’re going through is only temporary. I’m very big on self-awareness and self-love.”

Previous ArticleMaine Legalization Is Back From the Dead