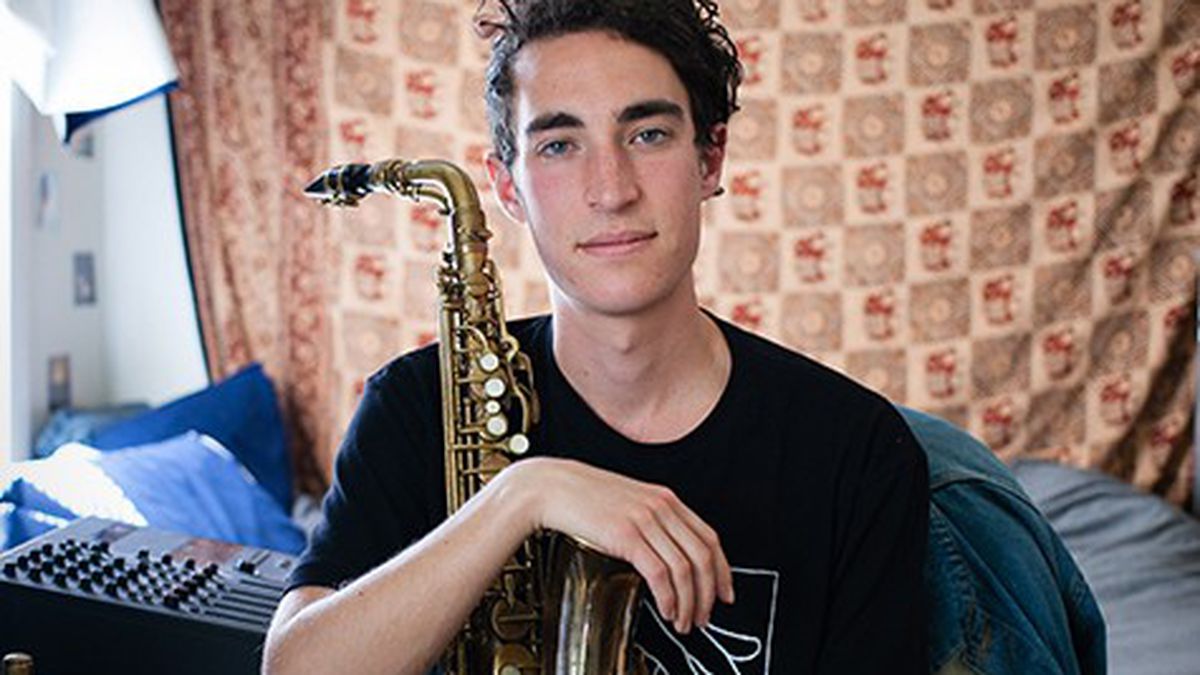 Experimental composer Adam Hirsch has been playing saxophone for almost his entire life, but his relationship with the instrument has been somewhat fraught. Hirsch, who is based in Oakland and will soon graduate from Mills College’s MFA program in electronic music, used to feel frustrated that he couldn’t master the saxophone in the traditional sense. So instead, he decided to create his own approach.

In a recent piece called Until Your Heart Stops, Hirsch sealed shut the valves of his tenor sax with clips and plugged its bell with a toilet plunger — making the mouth piece the only source of airflow in the instrument. He put two microphones inside of the sax and “played” it using circular breaking.

The microphones amplified the sound of the air circulating within the hollow body of the saxophone, creating a metallic reverberation similar to the quivering, percussive sound of a didgeridoo. In a move that would certainly appall some traditionalists, he scraped the outside of his sax with steel wool and paintbrushes, using contact mics to pick up the scratchy noises produced by the friction between the metal surfaces. Feedback rumbled intermittently throughout, punctuating the compositions with subterranean-sounding bass notes.

“I could never be super technically fluid,” said Hirsch during a recent interview in his bedroom studio in North Oakland. “For me, more recently, it’s been more about me trying to find my own language.”

Hirsch’s process is visceral — even violent — and turns the focus to his sax’s physical properties. The saxophone is a particularly emotional instrument, typically used to convey feeling through melody and timbre, but Hirsch uses it in a way that’s alien and abstract, discovering new functionalities in the process. “How can I reduce the instrument to its most basic properties, being like a tube, or a pile of metal, or this resonant body?” he said.

Prior to honing in on the kind of atonal, conceptual work he makes today, Hirsch was fairly prolific in Oakland’s indie rock scene as a member of Native Eloquence, which he started as a solo project and developed into a three-piece band. Native Eloquence made sprightly, psychedelic pop with whispery vocals and chime-y electronic effects that evoked the avant-pop of bands like Animal Collective. The group toured the West Coast and frequently played at local venues, but eventually split up when Hirsch’s bandmates moved to New York.

After putting the project to rest, he turned his full focus to the academic electronic music he is composing and performing today. He composed much of his latest work — including his MFA thesis — while researching the relationship between memory and the physics of sound. He’s particularly interested in the similarities between the ways the brain manipulates early childhood memories over time and the ways that we perceive the characteristics of music.

Hirsch explained that a good way to think about that is to compare the same note played on a saxophone and a synth. Though the pitch might be the same, each instrument imbues the note with a different “color” and “shape,” as Hirsch puts it, that we perceive subjectively based on how our brains synthesize the different frequencies each instrument produces.

Hirsch sees parallels between how our minds subjectively perceive the qualities of sound with the way our brains manipulate memories. “We have all these different basic systems for processing in the brain, like visual perception, auditory perception, motor processing … and they all process information in completely different ways,” he explained. “Basically, what happens when you’re forming a memory and recalling it is you’re forming some unique pattern and connection between all of those systems.”

Much like the frequencies that come together to produce a single note, which sounds different when produced by different instruments, “[a memory] doesn’t necessarily cohere into something that’s repeatable every single time.”

Hirsch’s thesis performance, which he composed for two cellos and various electronic instruments, delved into this theme. He composed its tempestuous movements by contrasting his grandfather’s childhood memories of escaping Nazi Germany and his own comparably more placid ones of his childhood in Santa Monica when he was the same age.

But the heady pretexts in Hirsch’s work notwithstanding, when he played me snippets of a recording of the performance, its combinations of brooding, jarring strings building up like a cresting wave told a story all their own — inviting my own thoughts and memories to drift in and out of focus as I listened.

Mid-Week Menu: Aztecali Shutters, But Will Remain a Mexican Restaurant