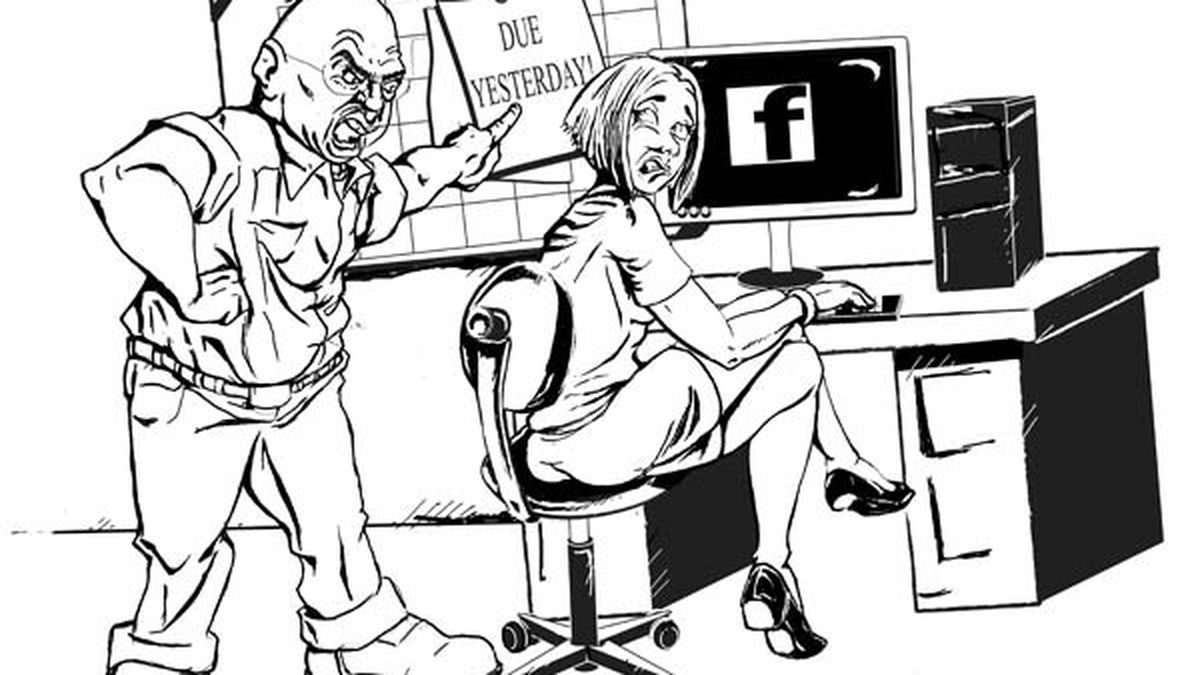 How a social networking addict tried to improve herself in the New Year.

I was supposed to start this article a couple hours ago, but I had
other things to do. Namely, I had to log onto my Facebook profile and
see who wanted to “friend” me. Then I had to update my status —
from “Rachel is working” to “Rachel is doing nothing.” Then I had to
search for a high school boyfriend and check his status updates. Then I
had to answer an invitation to join the Facebook group “300 Million
Strong to get Bad Brains to play Obama’s inauguration.” Then a friend
commented on my joining the group: “Don’t tease me! The Bad Brains are
my favorite group ever.” Then I had to comment back. Then I poked
someone. Then I had to update my status again, so that my 249 friends
could clock my progress as I advanced through life — albeit at a
slow crawl.

Granted, I was never the most productive employee. Other staffers
who once commended me for staying at the office late or coming in on
weekends to finish an article now know the reason why. But once I got
hooked on networking sites, procrastination got a thousand times
easier. I’ve taken various measures to curb the addiction: I’ve already
deleted five MySpace accounts, tried to restrict myself from checking
anything but work e-mail until I get home, tell myself I’m using the
social networkers as a way to get interviews and make business
connections, rather than waste time. But at this point, Facebook has
become pretty much a full-blown addiction. Everything about it —
the page layouts, the hundred billion applications, the active newsfeed
that lets everyone track your progress and instantaneously comment on
it — is just so much more seductive than anything that MySpace of
Friendster ever had to offer. It wasn’t long before I started letting
the web site’s virtual reality supplant my actual reality.

And I’m not alone. “Truth be told, I wasn’t that productive before I
was on Facebook,” commented Dan Abbott, in response to a Facebook wall
post asking for confessions from self-professed junkies. “Now, though,
everyone can tell.” Another friend remarked: “Ooh, is there such a
thing as Facebook intervention? I might need that.” My friend and
frequent correspondent Rick Govan wrote, “I think that ‘junkie’ is a
strong term. Do you call a leper a ‘junkie’… a Tourette’s sufferer
… a midget? It’s a sickness, dammit and I can’t help it.” Within 29
minutes of me writing the wall post in which I asked for feedback (at
11:10 a.m. on a Tuesday), I had four responses from four different
friends. Thirty additional friends were also logged onto the site. If
anyone has doubts about whether profligate use of social networking
sites actually occurs during work hours, let that be your answer.
There’s a whole nation of people out there who are misbehaving at work,
using their employers’ time to socialize. And, alas, I am one of
them.

Some employers have responded by installing proxy servers that block
out social web sites, porn sites, and, in extreme cases, personal
e-mail. Public schools are perhaps the least likely place to find
people trolling the web during work hours, since they have the tightest
filters. (Schools have to comply with the federal government’s Child
Online Protection Act in order to receive funding under the federal
E-Rate program, which helps schools obtain affordable Internet access.)
The Berkeley and Oakland Unified School Districts both have policies
that prohibit the use of Internet for commercial purposes, political
activity, chain mail, pornography, accessing confidential information
about students or staff, religious activity, or any unethical purpose
— basically anything that isn’t geared toward classroom
instruction. “We do keep a list of blocked sites on our Internet
filter, which precludes viewing of most social networking sites,” said
Oakland Unified School District spokesman Troy Flint.

Another impetus for strict Internet policies in the schools was the
problem of staff overtaxing the system with frivolous Internet use,
said Berkeley school spokesman Mark Coplan. “That piece of it started
with employees tuning into [online] radio stations,” he said. “Of
course, there’s no prohibitions against having a radio at your desk,
but too many employees going online and streaming radio — it jams
up the system.” He added that school districts sometimes have to walk a
fine line between making sure that students have access to all the
information they need, and prohibiting them from going to sites they
shouldn’t be going to — or from wasting the whole day on YouTube,
watching music videos. The campus policy at UC Berkeley is much less
stringent, and mostly exists to prevent e-mail harassment, discourage
computer hackers, and eliminate illegal file-sharing.

Blue-collar jobs that take place outdoors, involve manual labor, and
don’t interact with computers probably aren’t at risk of Facebook
abuse. But white-collar office jobs are a different story. While some
companies have taken the initiative to forestall their employees’ use
of social networking sites during work hours, the majority of them
appear to let us roam freely. And freely we roam — in my
observation, there are always more of my friends logged onto Facebook
and MySpace during work hours than on a weekend or holiday. While some
people don’t necessarily see the networking site as an enemy of worker
productivity, others bemoan their excessive Facebook use. “OHMYGAWD I
think they are such a time suck as I get lost snooping into everyone’s
lives when I go on to check my profile/wall etc.,” wrote local author
Mary Patrick Kavanaugh. “I joined to promote my book, and haven’t
really done much of that on Facebook.”

Dispirited by everything that I discovered, I decided to commit
Facebook suicide — i.e., delete my profile and say goodbye to
those 249 friends. But sorry, I just couldn’t do it. Two hundred
forty-nine friends are a lot to lose — even if some of them
aren’t really friends at all. But I’ll try to be more conscientious
about my usage patterns this year … right after I make another status
update.