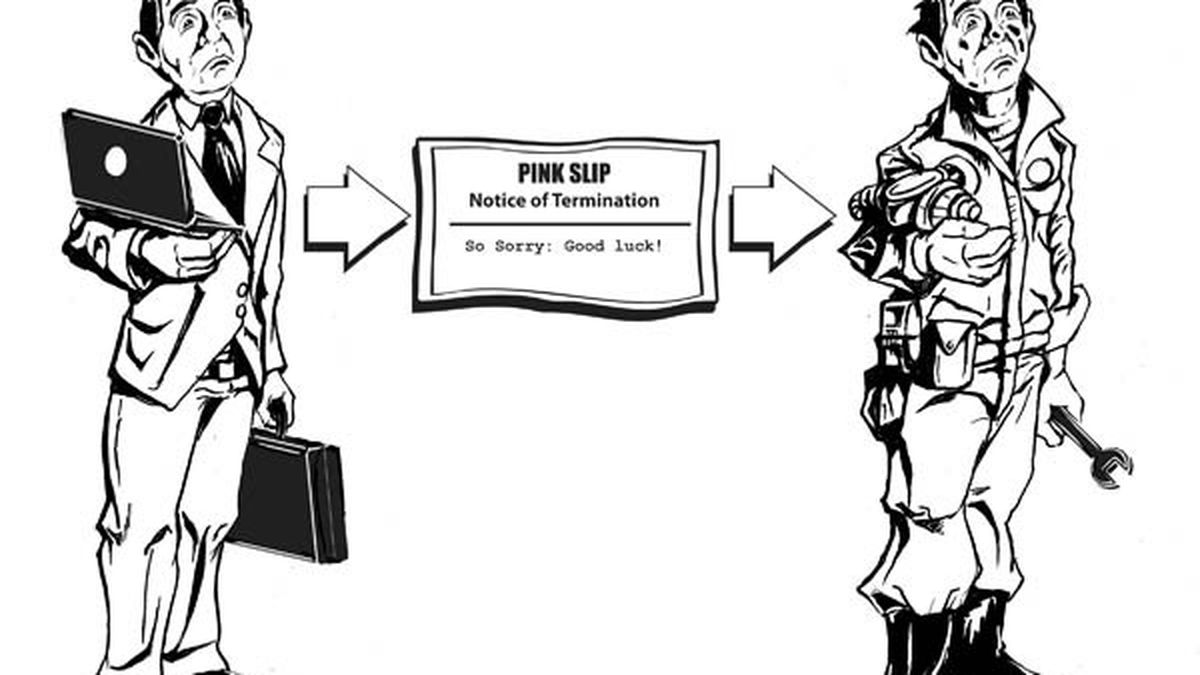 Losing a Job — and Maybe a Career

When should a change in employment status provoke a search for a new profession?

Until a few months ago, Michelle Quinn enjoyed a promising and
personally fulfilling career in journalism. The Oakland resident had
been covering technology for the Los Angeles Times‘ San
Francisco bureau for almost two years, following a ten-year stint at
the San Jose Mercury News and two prior years at the San
Francisco Chronicle. Then, in October, she learned that she
wouldn’t be spared from a series of sweeping staff cutbacks at the
Times. By December, she was officially out of work. Despite the
warning signs, it came as quite a shock — one whose ripples have
undermined her sense of self. While Quinn is not alone in grappling
with issues of identity following the loss of a job, the problem has
only been exacerbated by the country’s crippled job market.

Throughout a career of writing about technology and its impact upon
people, industry analysts never let Quinn forget that her job security
was far from assured. After all, newspapers are dying, she heard again
and again, and have no certain future in the age of the Internet. But
she saw the distant possibility of downsizing or wrenching
transformation as no reason to stop doing what she loved. “I got so
used to hearing the doomsayers,” she said. “I just developed a way of
being positive among them.” A part of her never believed it would
actually happen, and she wasn’t prepared for October’s announcement.
“It had the feeling that the plane was crashing and they started
throwing people off.”

Quinn and many others like her, journalists and otherwise, now face
an unwelcome dilemma: struggle to find another position in an imperiled
field, or accept the prospect of a forced mid-life career change. Since
journalism is an integral part of Quinn’s identity, finding work
elsewhere would require a major adjustment. But she doesn’t see much of
an option: “I’m trying to rethink who I am, and that means imagining
myself in different scenarios.” Luckily, she has landed among a
sympathetic community of unemployed journalists, finding old-fashioned
networking immensely helpful — as much for her own well-being as
for the uncovering of job prospects.

The nationwide job loss trend that has gained momentum since last
February has imperiled many local industries, including some recently
deemed secure or upwardly mobile. Bankruptcies, store closings, and
downsizing have put a broad scope of East Bay residents out of work. As
of November, the most recent month for which data was available,
unemployment in Alameda and Contra Costa counties had risen in one year
from 4.9 percent to 7.2 percent. That figure is doubtless higher now.
Nonetheless, some industries and job sectors are holding their own
— maintaining a steady workforce or even adding jobs. The picture
is grim but far from hopeless, and for those who’ve faced the chopping
block or merely fear it, a little perspective and preparation can go a
long way.

One lesson that many newspapers have learned over the last decade is
that adaptation is essential to survival. For print media in general,
this has meant keeping pace with technology. But it applies to
businesses and individuals across the spectrum who have followed our
country’s economy into a sink-or-swim situation. Ed McMillan,
coordinator for EASTBAY Works, a network of nineteen job centers
throughout the East Bay, believes that transferable skills are key.
“You can look at your skills and what they may redirect you into,” he
said. “All skills are transferable; it’s just looking at how they would
fit together in another job.” This simple yet often-overlooked way of
appraising experience can help concerned workers identify a new niche
and stymied job seekers find a new ladder to climb. For instance, when
the Silicon Valley tech bubble burst a decade ago, EASTBAY Works job
centers helped steer laid-off technology experts toward university and
other teaching positions.

Adaptability assumes a shade of meaning closer to desperation for Ed
Florentino, manager of the Mission Career Link Center in San Francisco.
“If there’s an offer, grab it,” he said. “If there’s an opportunity,
jump on it. It’s better to be underemployed than unemployed.” For those
still employed, Florentino’s outlook varies from industry to industry.
He anticipates continued layoffs in the financial sector, which lost
4.3 percent (2,500) of its jobs in the East Bay between November 2007
and 2008. That’s second only to construction, which fared more poorly
with a loss of 9 percent (6,600) of its jobs. Florentino doesn’t expect
either to pick up until late next year.

By breaking down the barriers between our personal and work lives,
telecommuting and tools like the BlackBerry and iPhone have surely
aggravated post-layoff trauma, prompting many more people to ask a
similar question to Quinn’s: without my job, who am I? It’s an
important question for the employed and unemployed alike, one that
books like Thomas Moore’s recent self-help guide A Life at Work
try to examine and uncover. For her part, Quinn shares a tip she
received from a job counselor that echoes McMillan’s advice about
transferable skills: find a component of your job that you like, and
then look for it elsewhere. The package may not be the same, but some
parts will be, and in the end it might even work out for the
better.

Of course, it won’t if you simply jump from one crashing plane to
another. At a time like this it’s particularly important to account for
the relative health of various industries. Educational and health
services, the most promising employment sectors, stayed flat in the
East Bay over the last year. Health care remains a desirable field,
especially for registered nurses and caregivers. Likewise, private
schools and universities are slowly adding jobs, while public schools,
which belong to the local government sector, are suffering
outright.

The manufacturing and automotive repair industries continue to offer
possibilities for applicants with the right training and skill sets.
And within a competitive entry-level environment, security positions
appear to be widely available.

All of which begs the question: when even our best-performing and
most reliable local job sectors are merely treading water, what kind of
shape is our economy in? McMillan suggests we stay positive and expect
improvement in the second half of 2009. “Some industries have taken
some big hits,” he said. “But those jobs will come back. It’s a matter
of timing.” If he’s right — and it is indeed all about timing
— this sounds like a fine occasion to look for work as a career
counselor.