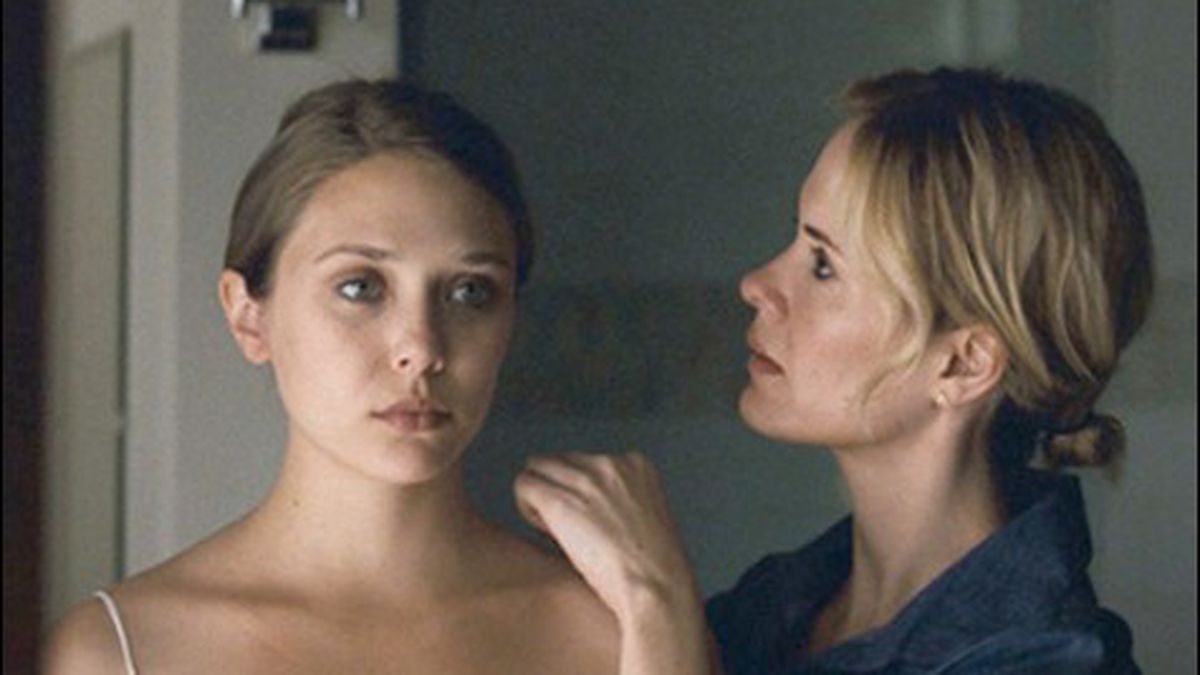 First cult is the deepest.

A terse young woman walks away from a cult in rural upstate New York and returns to the home of her sister and brother-in-law, but there’s a residual uneasiness in the woman (played by Elizabeth Olsen), who answers to a variety of names even though her family knows her as Martha.

Martha is obviously having a difficult time re-entering her former life, as well as in letting go of the cult and its hypnotic, violence-prone leader (John Hawkes). Matters are heading for some sort of disruptive climax inside Martha Marcy May Marlene’s head, a denouement that will also no doubt affect her well-meaning but frustrated sister Lucy (Sarah Paulson) and Lucy’s husband Ted (Hugh Dancy).

That’s the framework of filmmaker Sean Durkin’s extremely well written character-study-with-a-difference, Martha Marcy May Marlene, a stealth horror film that catapults both its writer-director and its leading player to immediate prominence through sheer power of personality and suspense, and then delves deeper into Martha’s inner troubles than many filmgoers might wish to go.

How can a scenario that implies more mayhem than it actually depicts make us so apprehensive? After she sneaks out of the cult’s farmhouse and reunites with her estranged sister, Martha sleepwalks through the decompression process with a cloud over her. Through flashbacks, we can see that she has plenty to worry about. The cult is a spooky, Manson-Family-style affair in which the female devotees are kept in separate quarters for the sexual enjoyment of the leader, Hawkes’ Patrick. Under Patrick’s dictatorial influence, sullen yet obedient young men and women make a nominal living selling vegetables in local markets, but their real taste seems to lie in predatory home invasions of nearby summer rentals.

Everybody in the group has an “inside name.” Martha’s is Marcy May or Marlene, depending on the circumstances — they fish for victims using their cult names as code. On one level, the film is a horror pic with a disturbing new angle, an elaboration on the social subversion of Michael Haneke’s Funny Games films more than a simple zombie fest. The Helter-Skelter-ness is unmistakable.

But it’s the other level that distinguishes Martha Marcy May Marlene and makes it one of the most penetrating films of the season — the level on which Martha displays her complete divorcement from her sister, from the summer-in-the-country lifestyle of Lucy’s yuppie friends, and from society in general. After what she’s been through in the country, Martha no longer has time for idle chitchat and the niceties of polite garden-party interaction. She’s a spy, an interloper from the other side of the looking glass, a ghost in league with other ghosts who arrive in the night, through unlocked windows. We can’t shake the feeling that she’s coolly sizing up Lucy and the increasingly nervous Ted for a kill. Or, perhaps, she’s merely dazed and confused after being raped and otherwise manipulated by Patrick and his minions.

The precise cause of Martha’s malaise is never spelled out, nor does she ever explain her two-year absence to her anxious sister. For reasons known only to her, her contempt takes the form of a sort of petulant somnambulism — she behaves like a bored teenager acting out against her dull, safe parents after becoming enthralled with a dangerous new boyfriend. She’s seething now, but a crackup is coming.

This provocative plot line relies on our getting under Martha’s skin and staying there for the entire running time. Durkin’s story wouldn’t stand much of a chance without Ms. Olsen’s unforgettable performance. With one TV show and a handful of yet-to-be-released feature films behind her at age 22, the younger sister of child-star sensations Mary Kate and Ashley Olsen happened onto an actor’s dream in the role of 4M. Is Martha a pathetic victim or a stone killer, a spoiled brat or the anti-Christ? Potentially all of the above. Olsen’s enigmatic visage suggests those and more. The only thing we can firmly cling to is the notion that Martha has not finished expressing her dissatisfaction with the world and everyone in it.

Tyro director Durkin, who has a habit of wowing audiences at Sundance and Cannes, plays a tantalizing game with such a subtle tale of restlessness. It pays off not only in Olsen’s part but also in those of Paulson, Dancy, Julia Garner (as Martha’s cultish comrade Sarah), and the reliable Hawke, one of Hollywood’s most believable portrayers of underclass unmanageability. The members of Patrick’s band of outsiders have more on their wiped minds than just bad folk music. The only noticeable misstep: Every devotee at the farm is young and has a perfect, lean body. A cult of out-of-work aspiring movie stars?