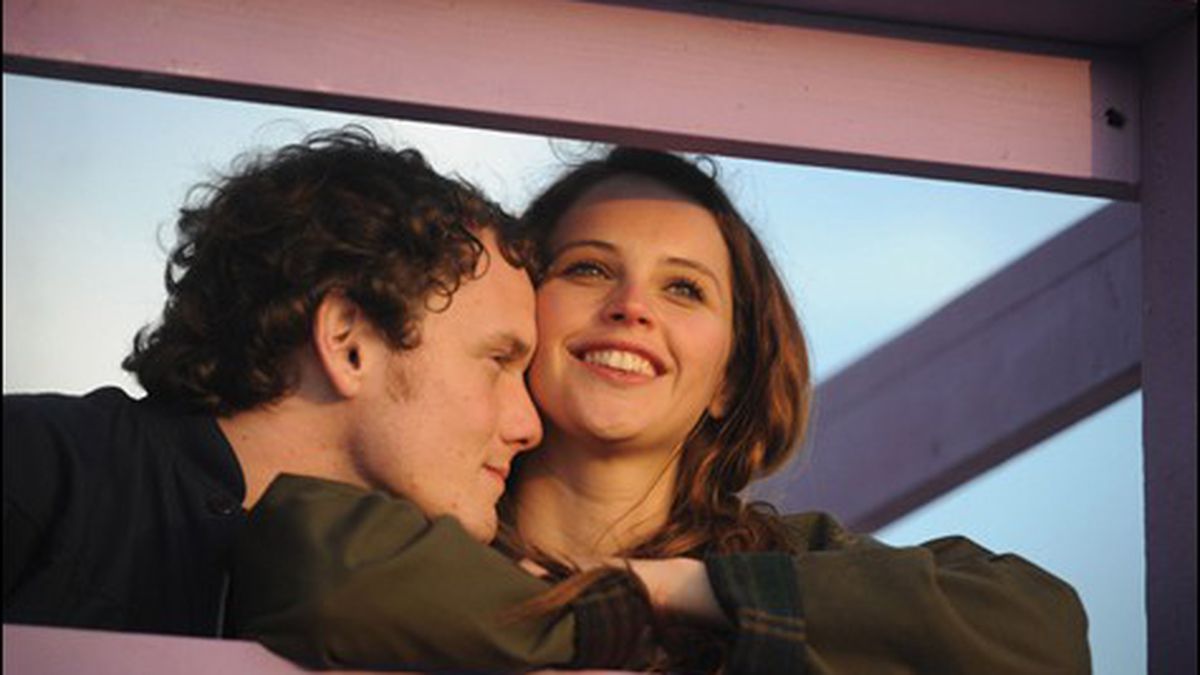 Take these sweet young lovers seriously. Somebody has to.

Yelchin is an ideal changeling who has no trouble playing quick-witted characters, from Chekov in the umpteenth Star Trek to the linchpin role of young Kyle Reese in Terminator Salvation‘s labyrinth. Chalk up his chameleon-like screen appeal to the fact that he was born in St. Petersburg, Russia, moved with his parents to Los Angeles as an infant, and has enthusiastically embraced LA’s kaleidoscopic urbanity ever since. There’s something liquid, graceful, and mercurial about the 22-year-old Yelchin, a certain elfin quality made to order for science fiction and fantasy but also, inevitably, for moist romances such as Drake Doremus’ latest contemporary comic gavotte of the emotions. The time is ripe for this actor to stretch himself a bit.

Pair him up with Felicity Jones and let the juices flow. Birmingham, UK native Ms. Jones, a former Oxonian scholar in English, possesses a doll’s face and the demure demeanor to go with it. Maybe that’s what appealed to filmmaker Julie Taymor (The Tempest), or what got the 27-year-old former child-actress work on Julian Jarrold’s Brideshead Revisited. Her delicate features cry out to be costumed in period finery. Perhaps that’s why she’s so effective playing against type as an indecisive 21st-century transatlantic, transcontinental soul looking for love on the far side of Before Sunrise territory. She and Yelchin would look completely at home dipped in plastic and set on top of a wedding cake.

Filmmaker Doremus impressed those of us who got past the title long enough to appreciate his skillful way with actors in last year’s Douchebag. That film was actually an examination of unrequited love and the tender tendencies of an otherwise disposable guy. Like Crazy, written by director Doremus and Ben York Jones, ups the stakes by about one dollar. Jacob (Yelchin) is an Angeleno furniture designer, Anna (Jones) is a British student on a visa stay; they fall in love, but rules, regulations, and youthful waywardness hamper the full spiritual consummation, as it were.

We want to swallow the idea of Jacob and Anna even if we occasionally can’t help seeing them as specimens in an acting exhibition. Jones’ teary eyes and Yelchin’s bashful earnestness see to that. These two belong together because everyone else in the world would eat them alive. And meanwhile Drake Doremus, a maker of agreeable miniatures, takes another step forward.

Election Season Brings out the Best in People