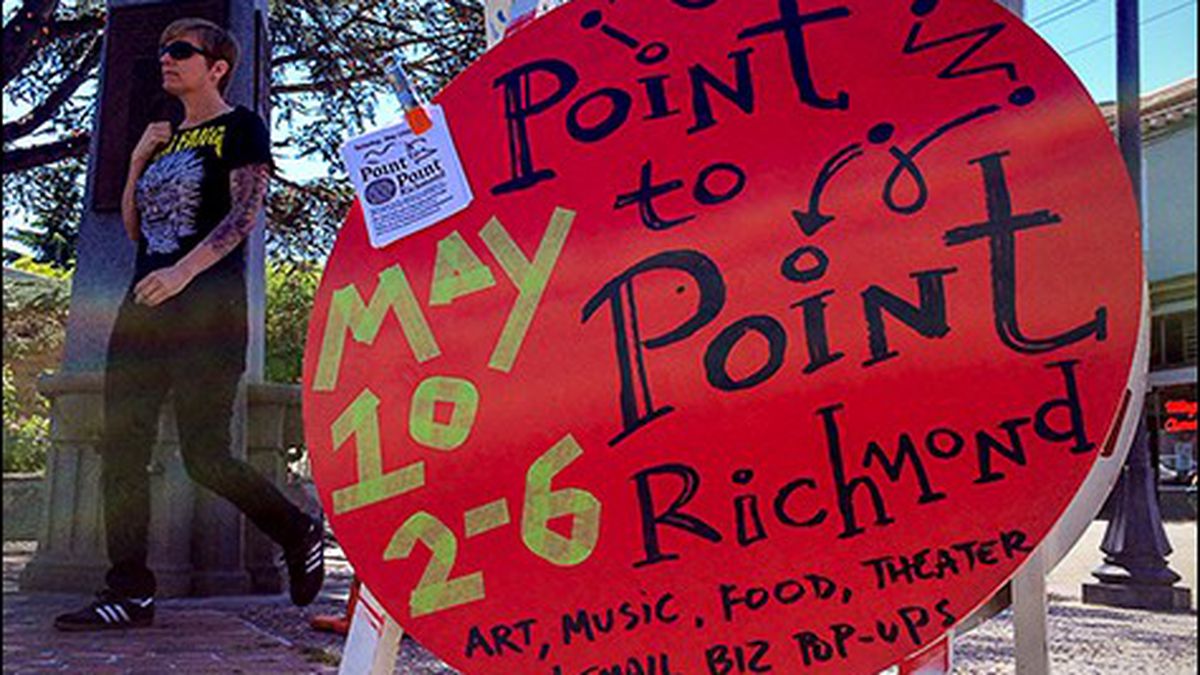 In March, Point Richmond newcomer Lars Howlett was walking down West Richmond Avenue when he spotted an empty gallery space. Hoping to rent it as an art studio, he went inside to check it out and ended up meeting longtime resident Virginia Rigney, who was also interested in using the space to exhibit her ceramic work, as well as pieces by other Point Richmond artists. The two realized they could share the space, and that led them to discuss the creation of a new event to revitalize the commercial district.

“We lamented that there was no more art walk and also that the farmers’ market had ended,” said Howlett. “We thought, wouldn’t it be nice to have an exhibition in this new space, but also to connect it with other restaurants and small businesses in the community?”

The result is a new pop-up event series, Point to Point Richmond, which aims to highlight local art, music, food, and theater offerings, as well as small businesses in the area. The idea, according to Howlett, is for Point Richmond business owners to collaborate on events that will help people experience their businesses in a new way.

The event is organized in deliberately decentralized way, with no registration fee or sponsoring organizations. Maps will be available to highlight the businesses that signed up in advance to participate, but anyone is welcome to join on the day of the event simply by displaying a red dot.

Thus far, about twenty business owners have expressed an interest in participating in the event, which will take place primarily in the commercial area, between West Richmond and Tewksbury avenues, on Saturday, May 10. Rigney will conduct a demonstration on the potter’s wheel at her and Howlett’s new space, Labyrinth Studio (103 W. Richmond Ave.), Brickyard Cove Marina will bring a sailboat to the district and offer free refreshments, and Ali Amaro, who owns a new hybrid gallery, boutique, and showroom, Ali Amaro | Art Jewelry & Objects (41 Washington Ave.), will have a booth called “What’s Your Point?” where participants can create their own red dots out of unusual materials like decorated hubcaps. Howlett will also create a labyrinth on canvas at the Point Richmond Community Center (139 Washington Ave.) for people to walk through.

Rigney and Howlett hope the event draws more foot traffic to the commercial district, but Rigney said they aren’t motivated by revenue. “It’s more to celebrate each other and what we each individually do and can share with others in our community,” she said. “I don’t think any of the artists involved have come into this with a thought that it’s a money-generating activity.”

Thus far the organizers have planned out events through September and anticipate that the series will evolve organically. “Our idea is not to create a fixed art walk or open studios or a business stroll,” said Howlett. “The idea is to reimagine and rediscover Point Richmond. I’m not sure exactly what it’s going to be in the end.”