.Low-Income Tenants to be Directly Displaced by Development in El Cerrito

An El Cerrito townhome development is displacing longtime tenants from an affordable RV park — in a case that reveals the lack of protections for the region's most vulnerable renters. 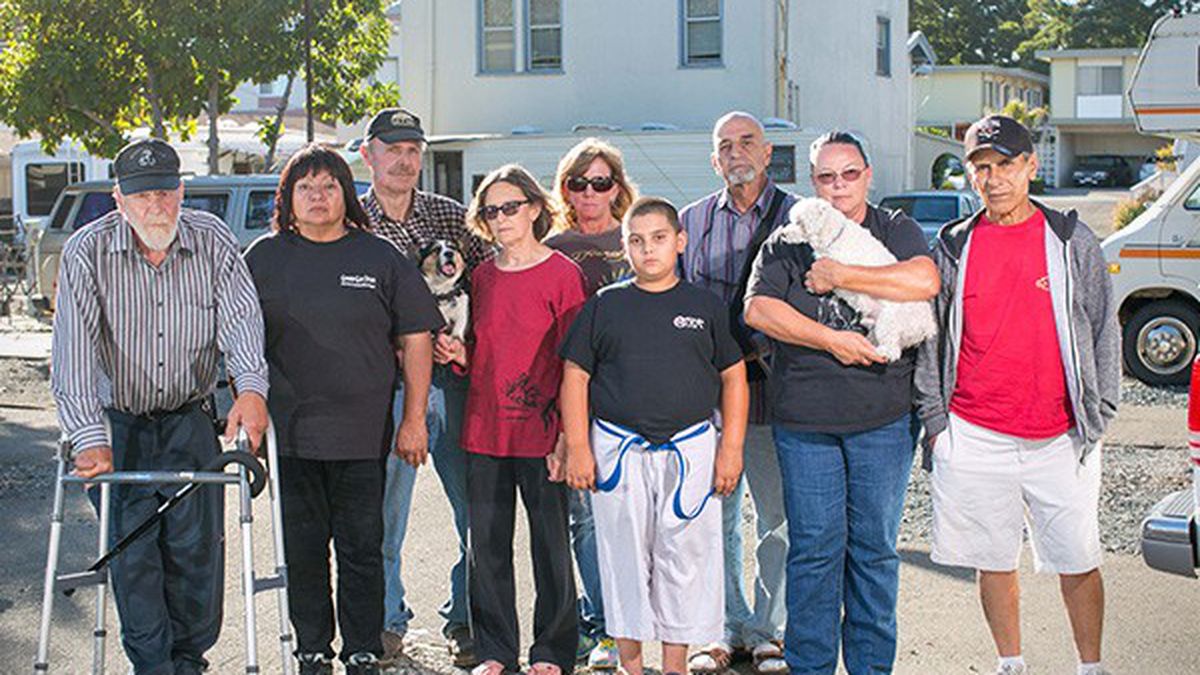 For the first time in her life, Patricia Lopez is having panic attacks. The 62-year-old El Cerrito resident works as a truck driver at Golden Gate Fields, the racetrack on the Berkeley-Albany waterfront, and lives by herself in a small 1984 trailer parked two miles north of her job. She pays $695 a month for her spot at Audiss RV Park, a mobile home park just east of Interstate 80 in El Cerrito where she has lived since 2000. Over the last year, as rumors started to spread that the owner of the property was looking to sell the land to a developer, her anxiety began to climb.

“It’s just been a lot of stress,” she said in a recent interview outside her trailer. “I’m by myself and I just don’t have the money for an apartment.”

Soon, however, Lopez and about a dozen Audiss RV Park tenants will have to find new places to live. Public records show that the longtime owner of the property, Edward Biggs, is in the process of selling the site to Berkeley-based developer, Urban Community Partners; Biggs has informed the residents that they will soon have to vacate to make way for a new market-rate townhouse development. Urban Community Partners has proposed a project with multiple buildings featuring nearly thirty townhomes, according to the City of El Cerrito.

At Audiss RV Park, there are currently nine trailers, including some that house tenants who have lived there for decades. But tenants said that residents of more than ten trailers have vacated over the last several months after Biggs and his attorney first warned that he would be closing the park and terminating their leases.

“It’s really daunting,” said tenant Jelina Pike, who has lived at Audiss RV Park for 21 years. “Everyday I look on Craigslist, but there is nothing. … We’re just people falling through the cracks in the economy, and we have nowhere to go.”

The Audiss RV Park is one of the last remaining mobile home parks of its kind in the East Bay, and tenants’ rights advocates said that its impending closure sheds light on the lack of affordable housing for the region’s most vulnerable renters. Additionally, the El Cerrito tenants’ ongoing dispute with Biggs — centered on a number of disagreements regarding the owner’s process of terminating their leases and closing the park — further highlights the need for stronger protections for low-income tenants who are pushed out of their homes due to development.

While complaints about rising rents and the lack of affordable housing are on the rise throughout the Bay Area, the Audiss RV Park case offers a clear illustration of the painful consequences of direct displacement. Several of the tenants live alone and currently pay less than $700 per month for their RV spots, and some are low-income seniors or workers who toil at low-paying jobs at Golden Gate Fields. For them, there are very few affordable studios or one-bedroom rentals nearby. And for the tenants who want to continue living in their trailers, there aren’t any accessible mobile home parks in nearby cities; some tenants said they are now exploring RV park options in Vallejo — twenty miles north in Solano County.

According to state data, there are more than 120 registered mobile home parks in Alameda and Contra Costa counties, but the vast majority of the sites are located in suburban areas far from where the Audiss RV Park tenants live and work. Additionally, most of the locations are not set up to accommodate RVs and instead are built exclusively for larger mobile homes. Audiss is currently the only RV or mobile home park in an area that encompasses El Cerrito, Richmond, Albany, and Berkeley.

What’s more, the longtime Audiss tenants live in old RVs that they may not be able to physically move or that may be barred from other RV parks, which sometimes have policies rejecting vehicles older than ten years.

Given these many barriers, the Audiss tenants said they hope the owner or developer might offer some relocation assistance. But city records show that Biggs and his attorney have been reluctant to provide any support and have also threatened to force tenants out more quickly than they originally had said.

Biggs, who is based in Fairfield and has owned the 2,500-square-foot RV park since 1969, first informed residents of the closure at a February meeting. At that time, according to documents he provided to the tenants (copies of which I received), Biggs and his attorney, Margaret Nanda, said that September 1 would be the earliest date tenants would have to vacate. But on April 22, with no explanation, Nanda sent the tenants sixty-day notices stating they had to remove their RVs from the property by midnight June 29.

“They pretty much tried to pull a quick one on us,” said Gennaro Pollio, 65, who has lived at Audiss for six years. “I never expected I would have to leave here.”

David Levin, staff attorney with Bay Area Legal Aid, a nonprofit that provides free legal services to low-income people, is now assisting the tenants and eventually helped ensure that they could stay past July 1. Last week, Nanda sent a letter to Levin (no relation to me) stating that Biggs would extend the deadline until August 13 — which is still weeks earlier than he had originally promised.

“We need more time,” said tenant Glenda Markle, who has lived at the RV park for sixteen years. “There’s really nowhere to rent around here. It’s hard to think of paying twice or three times the rent.”

Biggs also has refused to comply with a formal request by the City of El Cerrito to complete a so-called “resident impact report” that would outline how the project would affect the existing tenants and discuss the availability of spaces at other mobile home parks. State law requires that mobile home park owners complete such a report when they close a park to make way for a new development. This type of report can detail relocation costs and sometimes result in the owner agreeing to provide financial assistance.

Last December, Urban Community Partners submitted to El Cerrito’s planning division an initial proposal for a project on site — three buildings with 27 connected townhouse units, according to Sean Moss, senior planner for the city. Moss, records show, subsequently responded to the developers, stating that the application was incomplete and that the company needed to complete a resident impact report. Nanda, however, sent a lengthy reply, arguing that state law did not apply to Audiss, because it is technically classified as an “RV park” and not a “mobile home park.”

But even after an attorney working for the city sent a detailed letter arguing that the relevant law is vague in how it defines mobile home parks and that an impact report was required for the project, Nanda sent another letter saying Biggs disagreed and would not submit a report.

Moss said in an interview that Urban Community Partners has agreed to complete some kind of impact report, though the specifics of that analysis remain to be seen. And it’s unclear if the preparation of a report by the developer could result in any financial assistance for the displaced tenants. “We want to ensure that the tenants are treated fairly and in accordance with state law,” Moss said. Urban Community Partners representatives did not respond to my requests for comment.

“The law gives us rights as residents of a mobile home park,” said Pollio, arguing that Biggs or the developer should provide financial support for relocation, especially considering that the costs may be significant for tenants with older RVs. “I’d like to get as much as we can.”

Sidney Manchester-Jones, a seventy-year-old Audiss RV Park resident who depends on disability benefits, said he might have to rely on a homeless shelter once the RVs are kicked out. Given the surprise termination notice Nanda sent in April, Manchester-Jones said he wasn’t confident that the owners would provide any meaningful support. “They just want us to get out,” he said. “But I’m on a fixed income, and most my check goes to rent here. … I don’t have anywhere else to go.”

Nanda did not respond to a request for comment. In a brief phone interview, Biggs argued that the city’s contention that an impact report is required is wrong. “It’s not a mobile home park,” he said, later adding, “Why should I do [a report] when the law doesn’t require it? It costs a lot of money.”

Biggs said that he would try to help tenants find new homes, adding that he knew of some RV parks in Vallejo, San Pablo, and Napa that currently have vacancies. But, he said, he will not be providing any financial assistance for relocation.