Berkeley's Telegraph Academy is aiming to address the tech industry's diversity problem — by accelerating the careers of coders of color through an intense programming bootcamp. 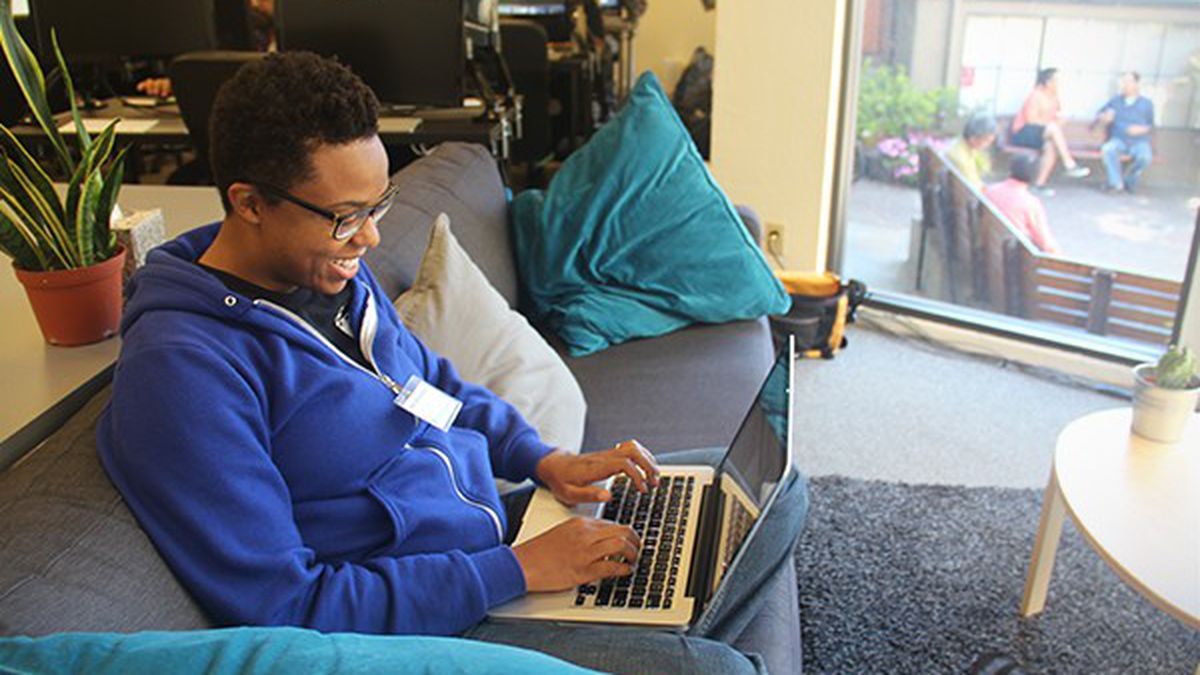 On a recent sunny Tuesday morning, seventeen students crammed into the top floor of a business suite in downtown Berkeley, crowding around computers with screens filled with lines of code. The scene might seem familiar — somewhat akin to a busy computer science college class — but the students are adults. They’re the first cohort of Telegraph Academy, a new coding school that aims to accelerate the careers of programmers of color, and, in doing so, help close the gaping racial divide in the tech industry.

Looking around the room, the students come from an array of ethnic backgrounds and professional careers: One student, Doris Hernandez, hails from Honduras, and another, Aheri Stanford-Asiyo, who is Black, has worked at the CIA and Google.

Telegraph Academy calls itself an accelerated learning program, which means it’s basically a twelve-week-long intensive bootcamp. For eleven hours a day, six days a week, students learn advanced programming skills. Telegraph Academy isn’t the first coding camp of its kind — there are at least twenty in the Silicon Valley — but its founders say the school, which is also funded by the White House TechHire initiative, is unique in that it’s aimed toward programmers of color.

Telegraph Academy founders Bianca Gandolfo, who is white, and Albrey Brown, who is Black, are both alumni of Hack Reactor, a programming bootcamp in San Francisco that is a partner of Telegraph Academy. Brown said that when he finished the program at Hack Reactor last year and entered the tech industry, large tech companies had started to release their diversity numbers — and the results were dismal. According to research conducted by USA Today in 2014, on average, about 2 percent of tech workers at the seven top Silicon Valley companies (Apple, LinkedIn, Google, Facebook, Twitter, Yahoo and eBay) were Black, and 3 percent were Hispanic.

“When I got out of Hack Reactor, I had the opportunity to either go into the industry and work on the skills that I had just developed, or turn around and try to fix that problem,” Brown said. “That was really my vision — creating a community for people of color who wanted to get into the industry, creating a direct pipeline for someone who was talented and ambitious, who was a person of color, who felt kind of iffy about whether they should be here.”

Gandolfo and Brown’s school is modeled after Hack Reactor; students commit to more than sixty hours per week of coding and programming projects in small cohorts, and later gain access to a network of companies to help them find employment. Hack Reactor boasts that 99 percent of its students get jobs after the program and earn a median annual salary of $110,000. Not all students at the Telegraph Academy are people of color, but Brown said they designed the program to be “a community where anyone can come in and feel comfortable being a part of it. One of our main pillars is to support students coming in, before they come in, as they’re in, and even after they get out when they’re in the industry. We just want to cultivate that so that we’re not just supporting them, but students are supporting each other.”

Business developer Mo Akade, who is Black, said the school aims to attract high quality engineering talent and also people who have the drive to develop their skills in an inclusive community. Akade, a Stanford graduate, said that she had felt isolated when working on her own business ventures — both as an entrepreneur who had to pick up technical skills but also as a person of color in a fairly white-dominated industry.

“Lots of people know that this is a big issue — that there is a severe underrepresentation of people of color in tech today. I think a lot of us agree that our tech tools and our products should better reflect the people who use them,” she said. “It’s pretty important to get more diverse teams building really great products in Silicon Valley.”

Akade said the school has the same curriculum as Hack Reactor, and that Telegraph Academy expects its graduates to achieve the same results. Telegraph Academy is also the same price as Hack Reactor: $17,725 for twelve weeks. But Akade said all admitted applicants are eligible for the academy’s deferred payment program, which allows them to make a down payment on their tuition and then pay the rest after they get a job. Akade said the down payment could be as low as $1,000 to $2,000.

“We expect that every single one of our students — we’re following the Hack Reactor curriculum, same instructors, proven model — in six months, they’ll have the money they need to pay it back,” she said.

Right now, the financial aid only goes to tuition. Akade said the program is working on finding financial assistance for living and food costs as well.

Telegraph Academy also uses the same application process as Hack Reactor — applicants typically must have some background in coding and programming; there is a coding test and a technical interview. Akade and other staffers of Telegraph Academy recruit students of color through advertising and by attending events held by other organizations that promote diversity in tech, including the Oakland-based Hack the Hood. Akade said that many of the program’s students heard about it through the personal networks of founders Gandolfo and Brown, but the staff is in the process of researching more organizations to reach out to. She said that in the future, they also plan to recruit students from historically black colleges and universities.

The school isn’t the first to try to address the tech industry’s diversity problem — other programs, such as Code 2040 and Hack the Hood, also provide training and outreach to programmers and students of color. Akade said that so far, the school has received positive feedback from its students and others in the tech community, although it’s only been operating since February (the school also offers a prep program before the bootcamp itself to help prepare students for technical interviews).

Both Brown and Gandolfo have connections to the East Bay — Brown grew up in Berkeley and Gandolfo studied at UC Berkeley. And eventually, they hope to move Telegraph Academy to Oakland. Akade said that the school wants to take advantage of the influx of tech workers from San Francisco and the relocation of companies to The Town.

“There’s something in the water in Oakland. There’s an ecosystem developing and it’s filled with companies really committed to diversifying Silicon Valley,” Akade said. “We only get stronger working together.”