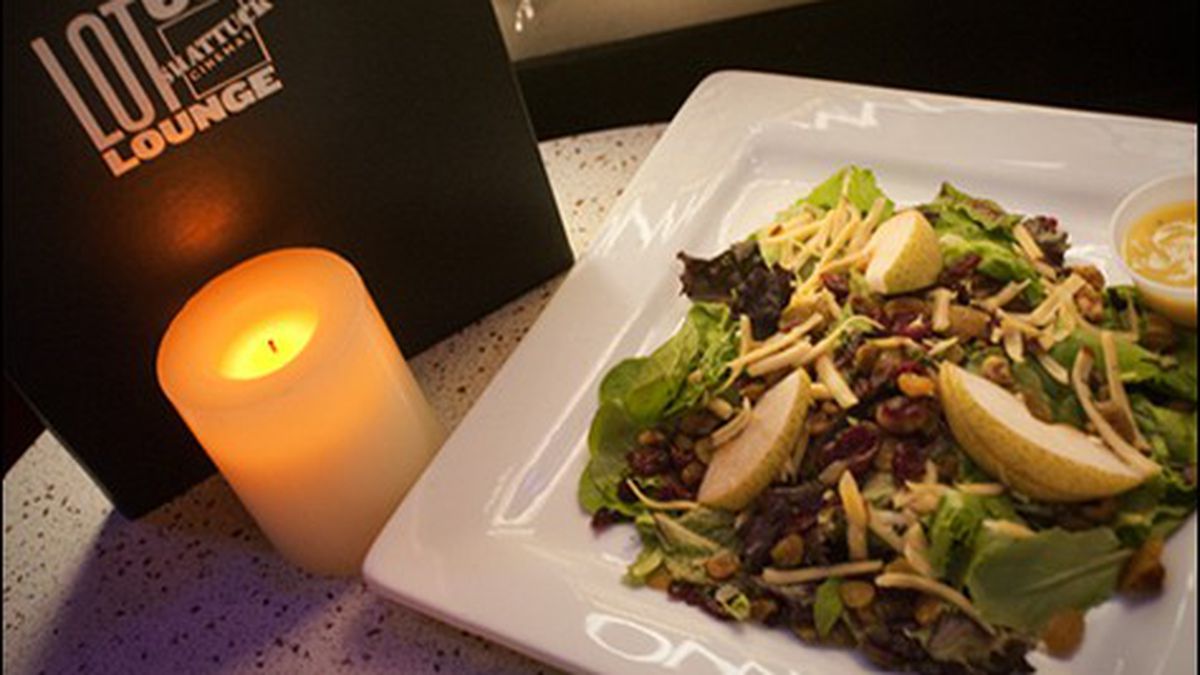 Lot 68 Is an Open Secret

Hidden inside a theater lobby, the restaurant offers a full bar and bistro-style meals.

You’ve passed it a thousand times without seeing it.

You pride yourself on knowing the names of every downtown-Berkeley restaurant and bar, but you have never heard of this one. Yet it thrives. Lot 68 is like Platform 9 3/4 in the Harry Potter series: hiding in plain sight. But you can’t get $3 well drinks, Caprese sandwiches, barbecued-chicken quesadillas, New York cheesecake, or baked sweet-potato fries on Platform 9 3/4.

Lacking street access or even a window to the world outside, Lot 68 occupies a space set, polyp-like, off the Shattuck Cinemas lobby. One of its two doors is on the box-office side, the other on the theater side. You literally can’t even see it from the sidewalk but must enter the lobby, striding past YogurtLand‘s side entrance, then deeper, past shimmery walls hung with framed movie posters. Deeper. Entering a movie theater always feels like entering Wonderland anyway, so by the time you reach Lot 68 you’re already a little blitzed.

It looks like all the cool restaurants and bars — and that’s exactly what it is, but with some tucked-inside-a-theater-lobby quirks. Its entire northern wall is glass. Mauve walls stretch to a matte black ceiling lightened by glass bricks. Dark wooden chairs frame tables: some party-size, others intimate. A fat black sofa beckons. Stools line a full bar framed by two huge flat-screen TVs showing sports. Rows of glowing bottles rise, lit from behind. The bar’s sleek wooden front is covered in a mosaic of sapphire- and garnet-hued squares. The whole scene is sparklingly clean. On-screen, athletes sprint, skid, collide.

Brought by a beaming waiter, a big, laminated American-bistro menu offers burgers and sandwiches, pizzas and salads, fifteen beers (including Widmer Hefezweizen on draft, Trumer Pils, and Unibroue Blanch De Chambly), and sixteen wines, including Mumm Jubileum Champagne — as do all the cool restaurants and bars. Just as at other chic black-ceilinged spots, the food arrives on huge, square, snow-white crockery, with giant, square-edged silverware on white napkins nearly as big as pillowcases. Food at Lot 68 is as attractive as its counterparts at other chic black-ceilinged spots — artful arrays, daring diagonals, juicy produce, authentic cheese — yet costs only two-thirds as much. And the servings are bigger at Lot 68.

Finding yourself nearly alone there at 5 p.m., you think: How sad. An hour hence, the place is packed. Every barstool is full. New arrivals hail the waiter, bartender, and fellow regulars. Patrons josh, whoop, embrace. It feels like the vibiest place in town, but also like limbo, half-hotspot and half-invisible, a rollicking secret. Don’t pity Lot 68; its legend spreads by word of mouth, and word of mouth is getting louder.

Framed movie posters on the walls and a Francis Ford Coppola “Director’s Cut” Zinfandel on the wine list are sparse nods to the cinema setting and to the fact that Landmark Theatres owns Lot 68, as it does fourteen other bars/cafes in its cinemas nationwide. Lot 68 is the only one of these with a full bar and a full menu, thanks largely to bar manager John James, who has transformed Lot 68’s menu and ambience significantly since it opened last year.

“It was really light and bright. It looked like a coffee shop, not like a bar,” said James, who has worked with Wolfgang Puck and managed Maxwell‘s in Oakland before landing at Landmark. He expanded the liquor and wine selection, altered the lighting and hues, and internationalized a core menu by adding gyros, Greek salad, a BBQ-brisket sandwich, a fajita/roasted-red-pepper pizza, satisfyingly well-stuffed quesadillas, plump crunchy vegetarian eggrolls with sweet-and-sour sauce, and more.

Sporting a scullery with a tripartate microwave/infrared/convection oven but not a full kitchen, “we’re an extension of the concession stand, a step up from the popcorn machine,” James said. Granted, a big step, where rich chocolate bundt cake with a “molten” chocolate center is on the dessert list.

Dishes here aren’t made from scratch, but assembled in-house using mainly fresh ingredients with startlingly lush effects. Arriving at Lot 68 parbaked, the pizza dough is finished off in the oven to make thick-crusted pies — rare in a paper-thin-pizza town — lavishly messy with hand-grated cheese and pre-made sauce: a perfect match for strong drinks, loud friends, and your favorite televised game. Ciabattas come parbaked, too, from Los Angeles’ La Brea Bakery: On sandwiches here, they’re tasty, chewy, substantial, and warm. Salads start with pre-torn spring mix and Romaine — but with lovely, even loving, additions: dried fruit, candied walnuts, and thinly sliced, perfectly ripe Asian pear in the Landmark Salad; Kalamata olives and piquant feta cheese in the Greek. Dressings are served on the side.

A family with small kids and grandparents. A pair of women clearly on a date. Men wearing dapper hats and work hats, a woman in a Super Bowl jacket. (“This is a sports town,” James said.) The waiter comes around to ask how you are, how the food is, and which teams you favor. For a minute, you think: This is Berkeley; why are strangers being so nice to me? Unlike at other chic black-ceilinged spots, the food is abundant enough to last a while. All the better, because you want to stay; people are happy here. In this softly glowing cocoon, the cheese is thick. The sauce is thick. The salads are huge, the drinks are iced. People are laughing.