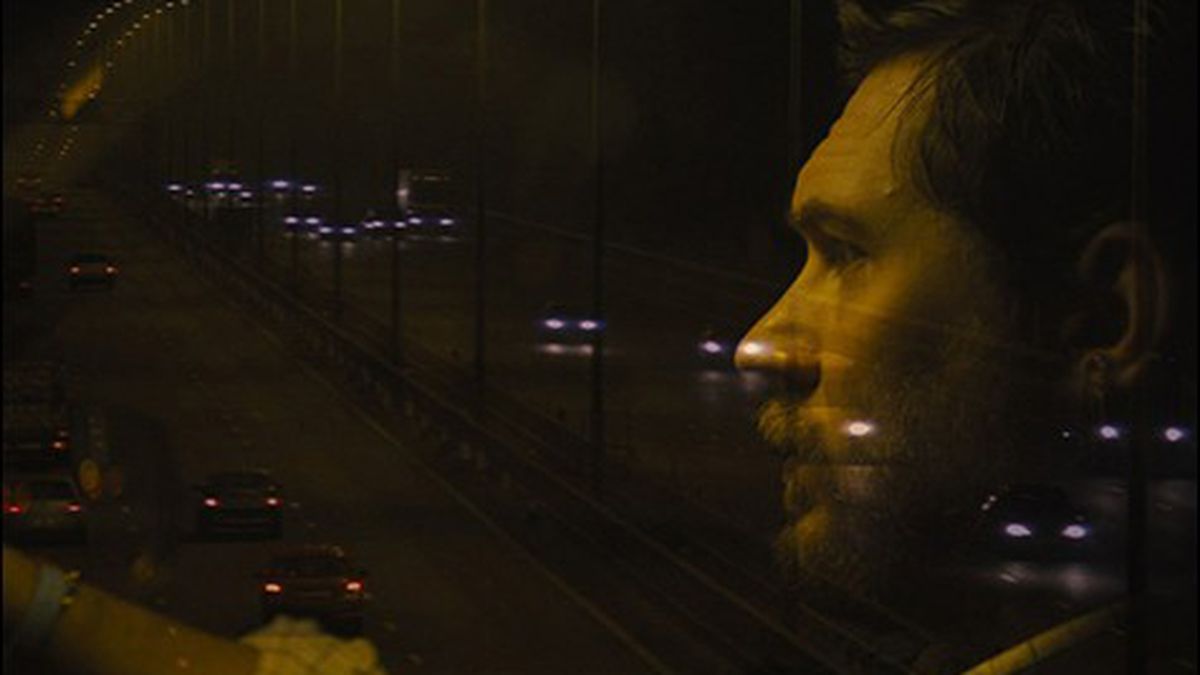 Locke is a truly exceptional film, probably the best thing in theaters right now, not only for the bravura performance of Tom Hardy in the title role, but also for filmmaker Steven Knight’s writing and direction in the unlikeliest of frameworks: A solitary man driving at night, talking on the phone to the people in his life, in real time.

The action begins at a construction site somewhere in Southern England, about 9 p.m. Quitting time. Ivan Locke (Hardy), an engineer in charge of building a concrete pad for a massive new project, gets into his Bluetooth-equipped BMW and sets out for London on the M6. From the moment he gets behind the wheel, Ivan is constantly on the phone, at first conferring with his boss and his work team about the all-important concrete pouring job to take place in a few hours, then increasingly communicating with his family, as well as a woman named Bethan (the voice of Olivia Colman), who is apparently about to give birth to Ivan’s child in a London hospital. It is to that hospital that Ivan is racing, instead of tending to the crucial moments at work or returning home to his wife and kids.

For reasons of his own, Ivan is trying to manage a very complicated set of procedural problems from a distance — a $100 million engineering feat with multiple steps and checkpoints; taking care of Bethan, the woman he had sex with once in a moment of indiscretion; showing up for the birth of the child he fathered with her; and explaining the situation to his wife Katrina (voice of Ruth Wilson) and their two sons. Alongside all this, in between phone calls Ivan angrily addresses the car’s empty back seat, where the ghost of his absent father resides — bitterly condemning the older man for abandoning him, and promising to make a better job of it in his own life. So even though Ivan is the only figure onscreen, he’s never really alone.

This is Ivan’s dark night of the soul, something with which Hardy has experience. The stage and film actor — best known for his “intelligent heavy” characterizations in movies such as Inception, Tinker Tailor Soldier Spy, and Bronson, as well as TV’s Band of Brothers — portrays Locke as a deliberately cultured man of polished professionalism, careful to maintain his technocrat’s tone of quiet competence even as his life unravels. Being there for the unplanned offspring of his unloved one-night stand has become the most important mission in his life, even if it means Ivan is not there for a career crux or for his crushed family at home.

This particular event takes place somewhere closer. It’s in Ivan’s blood. And if it seems he’s running away from everything meaningful in his life, it’s actually a run toward something deeper within himself. Writer Knight (Eastern Promises, Dirty Pretty Things) and actor Hardy have never shied away from naked emotion, but Locke represents their strongest work yet, individually and as a team.

That team has more than one player. Both Colman’s Bethan and Wilson’s Katrina have an undeniable anguished presence as the set-aside women, symbolically stationed off-screen. Ivan owes each of them something he can never repay. Andrew Scott, as Ivan’s thick Irish gofer Donal, provides the necessary comic relief in what might have been the tensest car ride since Charley Malloy took his brother Terry for a drive in On the Waterfront. Where Ivan travels next is relatively unimportant. As the cliché insists, the journey is more important than the destination. Locke invites us to sit close to a certain kind of pain, and enchants us to the point where we can admire it for what it is. As in real life, it’s neither sweet nor uplifting, but it’s a must-see.