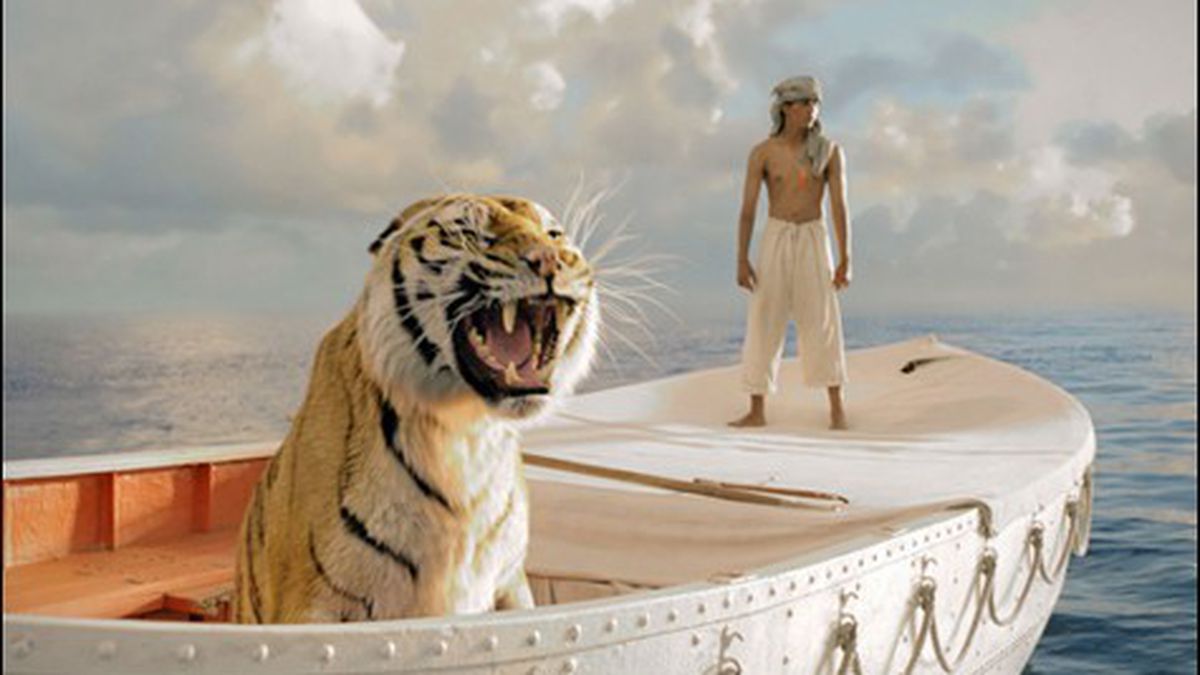 Talk to the animals.

When the insurance investigators are interviewing Pi Patel, the title character of Ang Lee’s Life of Pi, about the shipwreck that caused the teenage Indian boy to be cast adrift in the middle of the Pacific in a lifeboat with wild animals, they politely admonish him: “We need a story we can believe in.” Ang Lee’s fabulous fable, an eye-dazzling feast of wonders, takes the idea of “incredible” to new levels, and yet it’s completely believable in the only sense that counts.

From the ubiquitous trailers on TV, we already knew weeks ago this movie is about a young man sharing a small boat with a very large tiger. It’s a remarkable image. The tiger, who happens to be named Richard Parker — the explanation is cute, but not cute enough to bother with twice — seems about three times the size of the frightened Pi (played by first-timer Suraj Sharma). So huge he’s artificial-looking. It’s obvious that director Lee has used CGI, at least in spots, for Richard Parker as well as for the orangutan, rat, zebra, and hyena that also clamber aboard Pi’s lifeboat when the storm-tossed Tsimtsum Maru goes down somewhere in the Marianas Trench off the coast of the Philippines with all hands aboard. All hands except Pi and his friends, that is, and therein hangs the movie.

Pi has the sort of backstory that presumably reads well on the page but is difficult to portray onscreen. Director Lee and screenwriter David Magee, adapting the novel by Yann Martel, opt for a wildly pictorial pastiche in explaining that young Pi, son of an eccentric ex-athlete (Adil Hussain) who owns a private zoo in the former French colony of Pondicherry, India, was named for his father’s favorite swimming pool, the Piscine Molitor in Paris. Pi for short, the butt of many school jokes despite the boy’s insistence that his name represents the mathematical constant pi – “pie” instead of “pee.”

Business troubles force the family to move from India to Canada, and it is Pi’s father’s decision to ship the zoo’s animals to North America to be sold that sets the film’s central event — the only event, really — in motion. The ship sinks, Pi is left alone with his menagerie on the wide blue ocean, and Lee runs with it. Life of Pi boasts some of the year’s most extravagant visuals: stormy seas, the plummeting ship, the critters themselves, a nighttime sea of glowing jellyfish, a shower of flying fishes, the floating island of meerkats, the infinite starry sky, etc. Pi talks to the animals (there’s no one else around) and fights the elements. His tale of survival ranks as one of the most intense shipwreck movies of all time, at least in the literal, physical sense.

We find ourselves patiently waiting for the third act that never arrives. Instead, Lee & Co. delve into the inner, spiritual workings of Pi’s mind. Born Hindu, then embracing Christianity and Islam, Pi adheres to a central belief system of compassion — he weeps for the fish he eats in order to live — in direct opposition to his father’s insistence on science and rationality. This spirituality is carried on in cinematic terms by the director’s mythic mise-en-scene, and when we reach the end of the journey and find there’s no more to it than that, the movie evaporates like salt water on a banana leaf in the hot sun.

For all its splashy metaphysical spectacle, Life of Pi fits uneasily in the Ang Lee filmography. There’s none of the anguished emotion of Brokeback Mountain nor the ancient martial arts revenge motif of Crouching Tiger, Hidden Dragon — just a scared kid and an enormous pussycat in a beautiful pea-green boat, achieving harmony underneath the all-embracing sky. The metaphor is one of pure ecological coexistence. Compared to the angst of The Ice Storm or the revolutionary passions of Lust Caution, Pi’s ordeal is more of an ideal beginning than a complete film. Before it reaches its deflated last quarter, the film is exciting enough to stand alone as a rousing sea adventure with splendid effects work. Maybe we should let it go at that.

Should Oakland Even Bother Trying to Keep the Raiders?