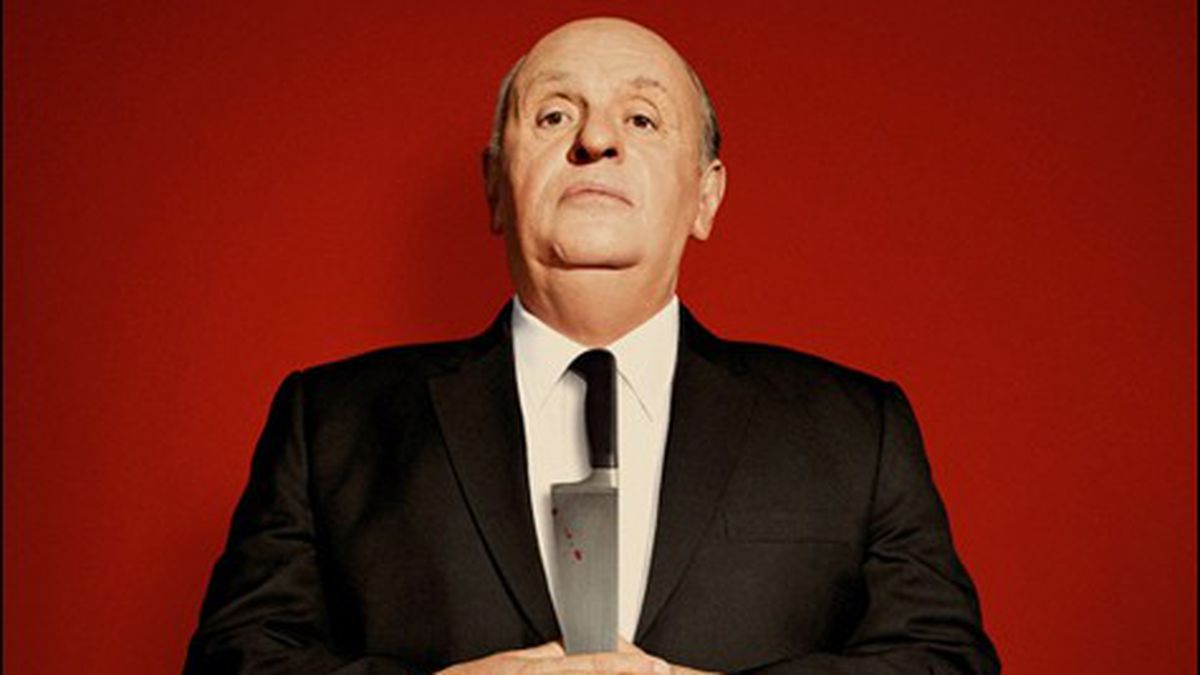 Before anything else about Hitchcock, we need to talk about Anthony Hopkins’ impersonation. We’d think that distinctive voice would be the easiest hurdle for an actor — after all, anyone who’s seen Alfred Hitchcock Presents even once can muster a drawling, adenoidal “Good evening.” But it’s more difficult than it seems.

On camera, Hopkins’ vocal imitation of the Master of Suspense works just fine. The actor who successfully channeled such diverse screen personas as Richard Nixon, Pablo Picasso, and Prof. Van Helsing overpowers our disbelief in five minutes’ time through sheer actorliness rather than with makeup or belly-and-jowls prosthesis. We simply “see” Hopkins, a leaner Englishman with a reedier voice and clipped diction, as the pithy, rotund, jovial/macabre personality who’s as well known today as he was when he died in 1980, and that’s that. When Hopkins’ Hitchcock is speaking off-camera, however, we catch a strange whiff of true menace. The disturbing intonations of Hannibal Lecter sometimes creep in.

Maybe that was intentional. Hitchcock is a collaboration of Sacha Gervasi, who directed the hilarious documentary Anvil: The Story of Anvil, and John J. McLaughlin, the screenwriter of Black Swan, with Ivan Reitman among the producers and Danny Elfman handling the musical score. These filmmakers are just as fascinated with the legend of Hitchcock, his working methods, and his eccentric, somewhat sinister personal traits, as they are with the accuracy of the playacting. Taking off from journalist Stephen Rebello’s book Alfred Hitchcock and the Making of Psycho, the film goes to the germ of the mystique, focusing on Hitch’s biggest hit, arguably his most misunderstood movie. The concept seems to be that if we “get” Psycho, we grasp Hitchcock.

The relationship of the director (Hopkins) and his wife/editor/writing consultant/muse Alma Reville (Helen Mirren) is up front as they sculpt their adaptation of Robert Bloch’s novel. Combining slightly awkward inserts of the “haunting” of the director by the spirit of Ed Gein (Michael Wincott) — the serial killer who inspired the book and film — with scenes of pre-production discussions, it’s established that the studio as well as the press are revolted by the story of a maniac who keeps body parts as souvenirs. We know now that Hitchcock considered Psycho a comedy, but in Gervasi’s backstage drama, Hitch is taking a gamble that moviegoers are ready to follow him up that hill, into the spooky gingerbread house, then up those stairs to get the pants scared off them. He wonders: “What if somebody really good made a horror picture?”

We’re ready too, to be shown that Hitch, the ultimate voyeuristic everyman, has installed his own peephole on the Universal soundstage, the better to eyeball actresses Janet Leigh (Scarlett Johansson) and Vera Miles (Jessica Biel). The most renowned director in the world is a fat old man who still has a thing for beautiful young women — a fact not lost on his wife, who carries on her own innocently flirtatious working arrangement with a writer named Whitfield Cook (Danny Huston). Meanwhile, ultra-bankable Hitch steamrolls past movie mogul Lew Wasserman (Michael Stuhlbarg), leading man Anthony Perkins (James D’Arcy), and a shocked censor (the always reliable Kurtwood Smith) by financing the production himself.

The gamble pays off when audiences eat it up by the thousands. Hitchcock’s position as the most popular filmmaking artist of all time — Chaplin, Ford, Welles, Scorsese, and Spielberg notwithstanding — is cemented into place, and we’re still seeing the reverberations in everything from The Blair Witch Project to The Innkeepers.

Alfred and Alma’s love story is a playful one, the tale of a pair of sophisticated Europeans who hit the jackpot in Hollywood. Hitch’s renowned predilection for cool blonds takes on added sizzle when we consider that not long after Psycho was made, Helen Mirren launched her career as a voluptuous blond sexpot whose screen exploits made Janet Leigh look prudish — check out Michael Powell’s Age of Consent. Gervasi’s Hitchcock, true to its subject, is full of unexpected humor gift-wrapped as a screaming behind-the-scenes shockeroo, but the soul of the film is in the home life of a man who takes a book and a bottle of claret into the bathtub, and the routinely uncredited soul mate who helped him shape his films. Try to remember that next time you step into the shower.