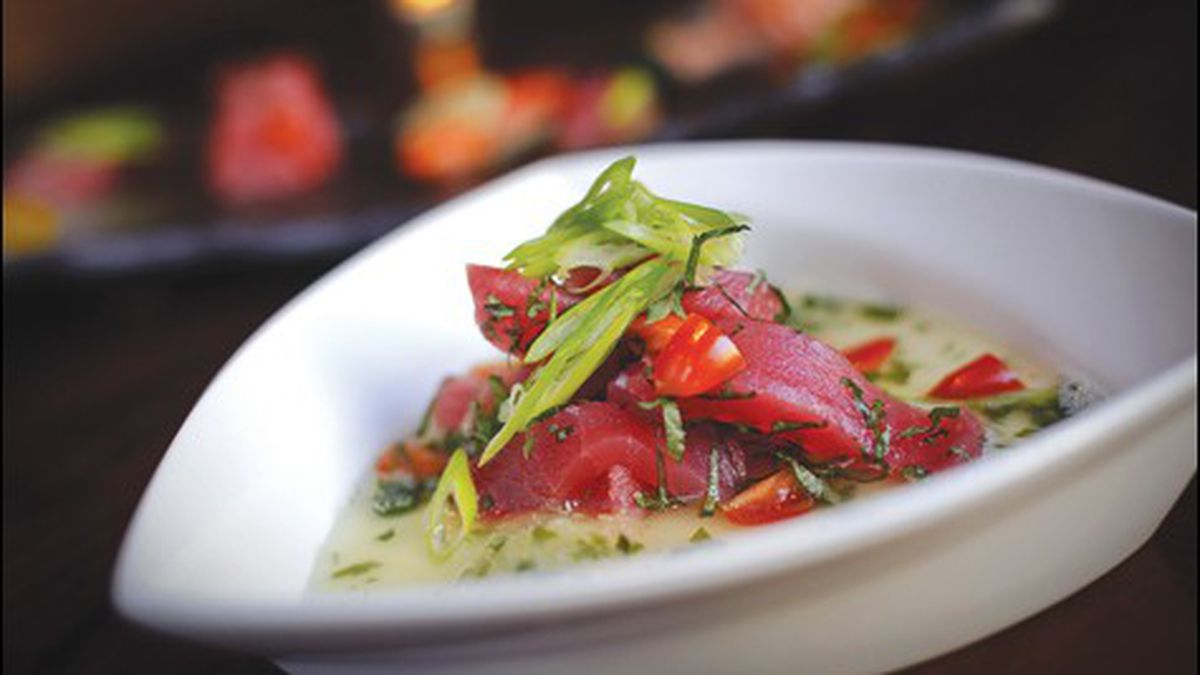 The new Old Oakland restaurant may be many things to many people.

So what is Liege, anyway? A moody lounge for urban hipsters in search of a good happy hour? One of those artisan cocktail joints where skilled bartenders push the envelope with syrups, tinctures, and herbs purchased that morning at the nearest farmers’ market? A place to explore the cuisines of the world on a revolving basis? A sports bar, an architectural treasure, a hangout where you and your friends can share a pot of burbling fonduta? As it turns out, all of the above — and although the disparate elements don’t quite mesh into a cohesive whole, there’s enough going on at any given moment to keep things interesting.

Take the hipster lounge. When you walk in, there are deeply comfy sofas and armchairs in the wood-paneled, candlelit nook to the right, the perfect place to recline, relax, and converse over a glass of wine or a cocktail. Other lounging spots are tucked by the big front windows and in the larger dining area, each accented with objets d’art and a lightly throbbing soundtrack. The brick-backed, inlaid-wood bar across the room is a laboratory of postmodern top-shelf cocktails crafted to fit the season, the whim of the barkeep, and the prevailing menu — a minimal yet ambitious bill of fare that changes every eight weeks to focus on a different global cuisine. (A regional variation on fondue is the menu’s one recurring feature.) Two enormous flat-screen TVs offer sports fans the thrill of victory or the agony of defeat, depending.

The venue’s most diverting element is the space itself. A barn-like, high-ceilinged storefront formerly occupied by an architectural firm, a limited-edition sneaker boutique, and the Old Oakland Theatre has been thoroughly renovated with new cabinetry; light fixtures and metalwork; a handcrafted pine floor; an Eric Bailey cherry-blossom mural; and tabletop replicas of Oakland manhole covers, a gritty yet copacetic touch. Sumptuous brown drapes, wrought-wire chandeliers, a beautiful pressed-tin ceiling, and two ethanol fireplaces add splashes of softness and warmth — and there’s even a photo booth and a large common table with chess and dominoes. It’s an attractive addition to Old Oakland‘s brick-and-cast-iron 1870s milieu.

Owners Kiri Eschelle and Dirk Kahl, who also operate Levende East down the street, opened Liege in mid-March with a menu of Latin-American fare, the first cuisine in their eight-week culinary rotation. The choice of cookery is also reflected in the wine selections and cocktail menu, so along with shrimp ceviche, pulled-pork taquitos, and pineapple-pepper guacamole, one could enjoy a Chilean chardonnay, an Argentine merlot, or a cocktail called the Mexicali Affair. Through July 18, the cuisine is Japanese, and we began our meal with a pair of oyster shooters, two plump, briny mollusks submerged in sake, followed by three small plates. The cured yellowfin tuna was lush and tender, but its subtle flavor was overwhelmed by the sweet yuzu champagne marinade in which it was served. Ditto the smoked steelhead trout, a rich, meaty filet burdened with an abundance of soy sauce and scallions. The broiled pork belly, on the other hand, had a delectable garlicky flavor, but wasn’t as luscious as it should have been.

The fondue of the evening was more Asian hotpot than Swiss cheese-fest: a kettle of bubbling broth presented with several long-handled fondue forks, a plate of raw cubed sirloin, another of red-fleshed ocean trout, and another of oyster mushrooms, asparagus, yellow squash, sweet red pepper, and chunks of white onion. As always, the communal cooking process was labor-intensive but fun, and the fondue was accompanied by our choice of twelve house-made dipping sauces ranked from mild to hot. None were especially complementary to the food, and the hotter sauces (serrano-prickly pear, jalapeño-black cherry, habanero-pineapple) were more spicy than tasty.

Liege’s vegetarian credentials depend, of course, on the cuisine of the month, but based on the past two menus, there are generally enough meat-free options to keep the herbivores happy. Starters usually include the cheese platter plus olives, edamame, or the like; roasted-mushroom soup, sweet-corn salsa, and guacamole have been among the recent small-plate options. And in lieu of meat or fish, you can always order a platter of mixed vegetables to dip into the fondue.

Above and beyond everything else, Liege is a bar, and that’s where much of the venue’s creativity is centered. The French Girl from Ipanema is a complex concoction of sugarcane syrup and Benedictine and orange bitters, with a touch of lime and just enough egg white to froth things up and lighten the kick of the Cruzan single-barrel rum. The Cool Hand Luke (Absolut vodka, Blue Coat gin, lavender syrup, and sliced cucumber) was light, summery, and refreshing; while the Drunkship of Lanterns tasted like a slightly sour lemon drop despite all of the Lillet, thyme, honey syrup, and peach bitters that went into it. Best of all was the Lola, a rich, spicy tumbler of Hangar One pear vodka, St. Germain, and lemon juice. (Another option is to drop in on Fridays, when the bartenders wander over to the Farmers’ Market and plan a cocktail of the day to showcase whatever’s fresh, seasonal, and tantalizing.) The dozen-item wine list changes with the menu, and there are seven beers in the bottle and four on tap including Oakland’s own Linden Street Burning Oak Black Lager. Order one at the bar, settle in by the fireplace, chat up a stranger, watch the game, enjoy a pot of trans-cultural fondue, and contemplate the little sports cars speeding over the cherry branches … just not at the same time.

Wednesday’s Briefing: Alameda will fine you if don’t wear a mask;...