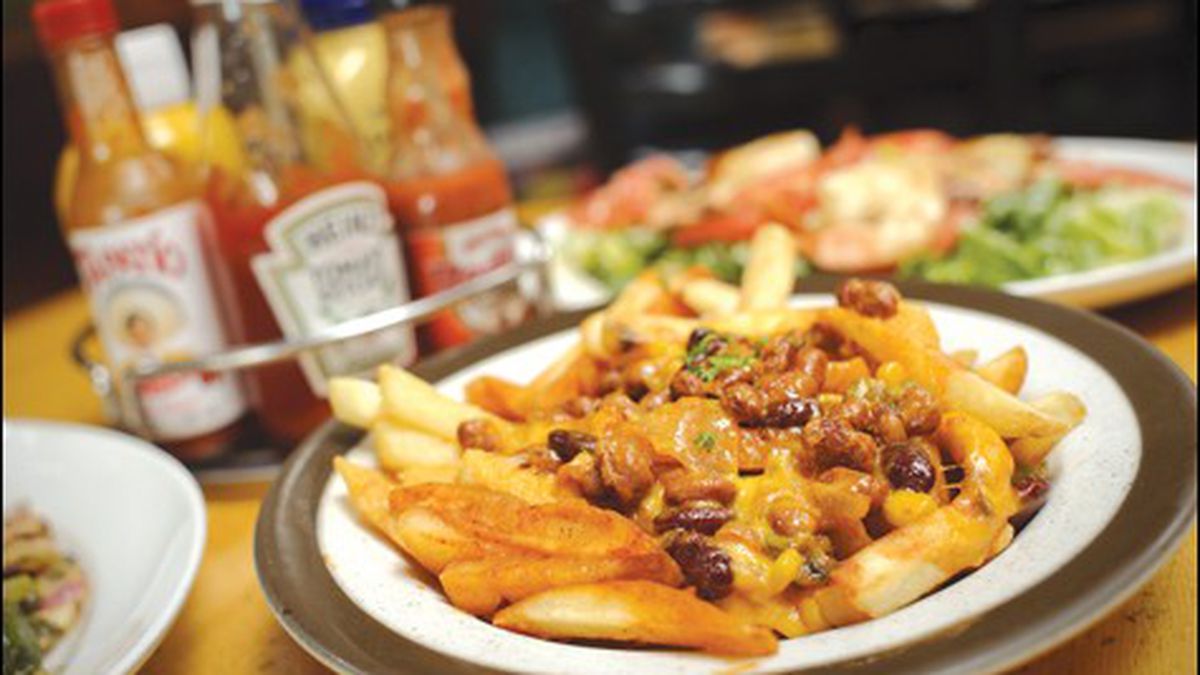 All Day and Into the Night

Smiling, your server asks whether you’d prefer cheddar, Swiss, or mozzarella on your pizza, and whether you’d rather it adorn tomato sauce or pesto. You choose other toppings, too, as if this were a pizzeria, which it’s not, as evidenced by the bottles of ketchup and hot sauce that wait at the center of each table. You could just as easily have ordered steak, huevos rancheros, curried eggplant, a Louisiana hot-link omelet, salmonburger, half-pound beefburger, French onion soup, menudo, salade Niçoise, Berkeley’s best house-baked brownies, espresso doppio, or rainbow trout.

Eyeing those condiments on wooden tables varnished to a ship’s-galley glutinous gleam, basking in the milky effulgence that pours through giant skylights, noting your server’s politeness, you realize what’s going on here: Time has stopped.

It passes, in the sense that food arrives and diners finish it, and songs play start-to-finish through the speakers. Wi-Fi abounds in the breezy coffee-and-pastries front room and the lesser-known full-service dining room. But in essence, at Au Coquelet time has stopped. Not pompously, not showily, not as a tourist attraction, but quietly. With ample elbow room, abundant light, an amiable languor, and a head-scratchingly wide array of well-cooked, hefty-portioned, affordable food and drinks, Au Coquelet is the primordial cafe. It’s how cafes were meant to be, before an ever-speedier society and skyrocketing urban rents rendered them claustrophobic, corporate, costly, soulless, and slick. In most modern cafes, food is an afterthought — scant salads, sandwiches, pastries baked elsewhere — and tables are crammed so tightly as to preclude privacy, much less outflung arms. You can’t plan coups d’etat without privacy.

At 5 p.m. on a typical Monday at Au Coquelet, a shaven-headed man whose scooter rests rakishly against his chair covers his entire tabletop with stacks of paper, which he peruses: a teacher, perhaps, grading essays. Three jolly cops tuck into hot meals. A youth wearing an Abu Ghraib torture-silhouette T-shirt presides over a gaggle of laughing geeks. Another man sits fast asleep, face nestled in the textbook lying open on his table, breathing gently through his mouth as happens only when one feels completely safe.

Open from 6 a.m. until 1:30 a.m. on weekdays and even later on weekends, with its kitchen serving cooked food until closing time, Au Coquelet is a stay-all-day home away from home where writers are allowed to write and artists cannot help but dream, where loungers lounge and first dates segue slowly into love. With its two-year-old liquor license, 35-year-old Au Coquelet now offers exotica such as ouzo, Frangelico, Irish coffee, Moscow Mules, and hot buttered rum. They’re listed on a cocktail menu adorned with a cartoon bullseye and the words “Delicious Treats Hittin’ the Spot,” which proves again: This is the past. Please let me stay.

A legacy of the cafe’s French-Basque original owner, two inner walls of the restaurant are crafted to resemble the outer walls of village-style buildings, with faux lace-curtained windows set into them and faux shingled roofs thrusting into the dining room. The skylights, soaring ceiling, sound-sucking wall-to-wall carpet, and enormous DIY Christmas-bulb chandeliers complete the effect of dining in some warm foreign courtyard.

But where? And when? Lasagna says it’s Italy; quesadillas and Reuben sandwiches say otherwise. The skylights, ceiling fans, crystals suspended mobile-style, and rich, soft-crusted quiche say it’s the 1970s. Espresso, BLTs, and a framed picture of a rooster composed of dry beans say it’s the Fifties. House-cut finger-width French fries and abstract paintings say it’s the Sixties. Mexican music and the Hispanic worker with a cobra tattoo wiping tables say it’s 2010. But the brick walls say: ageless. This is the Ur cafe from time immemorial.

On a big but hotdog-bun-like French roll, the grilled-eggplant sandwich includes mushrooms, pepper, lettuce, tomatoes, and tomato-sauced eggplant cooked satisfyingly satiny-soft. Fluffy scrambled eggs join ham or bacon in brick-size breakfast burritos that, by virtue of also including cheddar, Swiss, or mozzarella, are Mexican but universal. Meatless two-bean chili is thank-you-God comfort food, especially in chili-cheese fries. Puffy thick-crusted pizzas are nostalgic battle cries: Thin crusts are, truth be told, this millennium’s emperor’s new clothes. Some of this is food that could fatten one. In a nanny state, it’s nice to still have that choice.

The rear room is perfect for meetings, given its convenient location and widely spaced tables. In the front room, facing onto University Avenue, elephantine coffee drinks accompany house-baked pastries such as the unique double-decker “zebra” — brownie and chocolate-chip cookie above, tender macaroon below — and heavy-in-a-good-way pecan torte, one wedge of which amounts to a whole meal. A disjointed sign on one wall reads, “Wel come to this hou se; ever yday is a bless ing!” Old men read newspapers. Laptops glow softly. Students highlight books.

The cafes of our ancestors were not for the rich but the poor: the starving artist and rooming-house resident seeking refuge from heat and cold. Au Coquelet’s late hours are key. Every drone with a nine-to-five is up early, but who’s up and in cafes after midnight? Only the interesting ones, the outliers with weird jobs or no jobs at all. The cafes of our ancestors were incubators.

Having owned Au Coquelet since 1982, Mehdi Kashef relishes the details that turn customers into regulars: soups made from scratch; meat delivered daily from Oakland so that it need never be frozen; croissants served still warm mere minutes — never more than sixty, here — after emerging from the oven.

“In my heart, my philosophy is this: Make the cafe cozy,” mused Kashef, who earned an MBA at Golden Gate University. “Make it family-like. Make it an everyday place that serves the kinds of food people crave — French dip sandwiches, say, and fish and chips.” That’s not all: “I want to fill people’s eyes with value,” he said. “This is the real meaning of trust.”