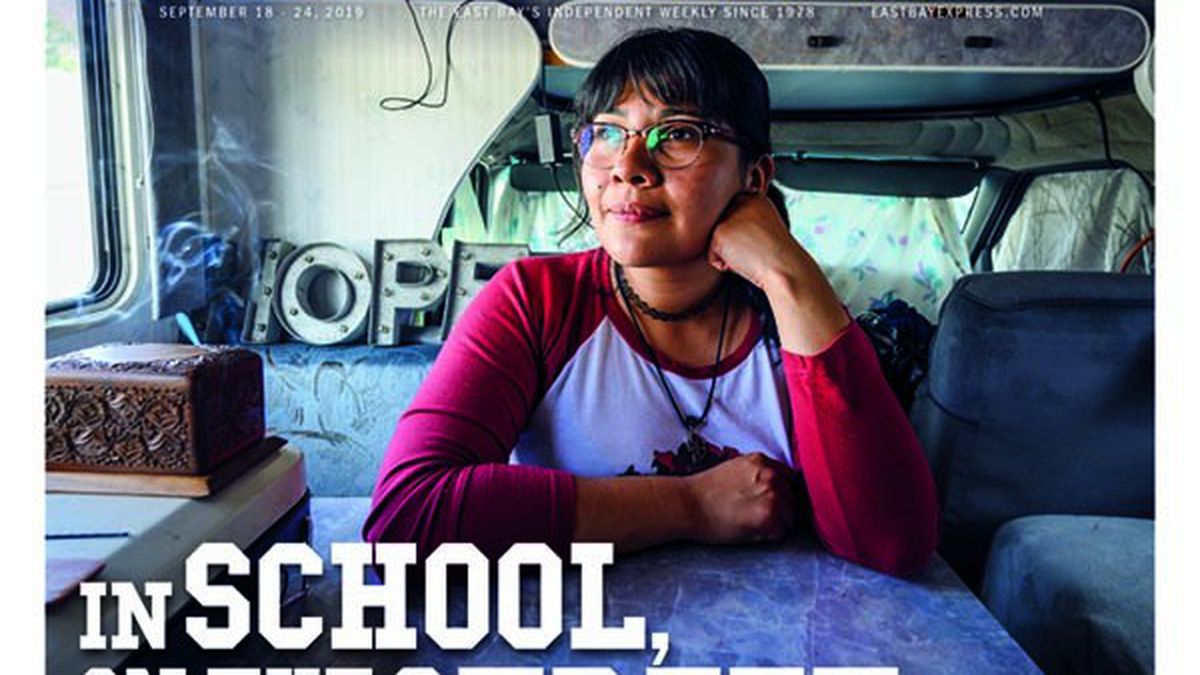 Harris Will Not Be President

Harris is somewhat of a nothing burger. She cajoled, faked and did much worse to slime her way through a very slimy system. Her behavior at the Kavanaugh hearing was atrocious; rude and self-obsessed to a fault, but not for seeking truth about Brett just the big show for herself to begin to get her name out there. Now, she’s flopping mightily at this point, sinking fast. As a senator she is already way over her head. She will not be president.

Reform of the Gig Economy A Wonderful Thing, Raising the Bar, Sep. 18

The New Economy is a Smokescreen

The writer of this article is right on point. This so called “new economy” is a smoke screen for a modern elite class of venture capitalists to take back basic economic benefits that American workers have earned through collective bargaining over the last 150 years. In exchange for services rendered, workers are entitled to receive a fair wage, safe working conditions and benefits. This whole notion of workers being contractors not employees is a concept contrived to keep all of the profits at the top of the corporate structure while exploiting low skilled working class people. These companies keep all of the money and take none of the risk or responsibility that comes with running a company. As a society, we cannot allow companies like Uber and Lyft to provide the exact same services to the public as a taxi cab company, but not be required to compete while playing by the same rules. This warped sense of competition should be branded for what it is, GREED. It is the kind of greed that is ultimately destructive and unsustainable. In fact, the participation in this farce by so many is a sign of just how broken this US economy has become. Corporate profits up, CEO pay up, stockholder share values up, worker compensation as a percentage of profits have been stagnant for the last 30 years. Just look at what happened with the Trump tax cuts for the wealthy. It did not stimulate the economy at all. Companies bought back their own stock and gave raises to executives. The jobs that were created in almost all case were low paying jobs that do not provide for a family in the world we live in today. Government is always a step behind technology, but I am glad to see California step up to the plate as it relates to this gig economy. Similarly, at some point the federal government will catch up to Facebook, Google and others and establish some rules of the road before their greed destroys not only the economy, cut the society as a whole. Technology and innovation without guard rails has never been good for capitalism and what we experience today is no different

Mr. Youngdahl has written a misguided piece. He forgets that driving for Uber represents an opportunity to work that many people have not had. Many drivers were able to drive part time and earn a few dollars. As independent contractors they could come and go at will. By making Uber drivers employees, and giving them additional benefits, you reduce the available opportunities for work. Also, Mr. Youngdahl is unaware of how the market mechanism works. As the company pays out more in various types of benefits, it pays the driver less in direct compensation. Generally, the Uber drivers are seeking direct compensation for specific needs. As Mr. Youngdahl makes driving for Uber more complicated and costly, the opportunities will decline. Uber will be more like a Cab Company, and less competitive. The end result will be fewer opportunities to earn a few bucks when needed. “Do-Gooders” like Mr. Youngdahl interfere in the market mechanism only to reduce opportunities. In this case, it will reduce the impact of competition which Uber has brought to the Cab industry.

I love that just because companies have to provide benefits means that they “have” to pay drivers less and become somehow “less competitive.” This argument is so tired and lacking in an understanding of how the “market” really works. If ALL the companies have to do the same thing, there is no competitive disadvantage. That is the positive role government can play to make sure that companies that opt to do the right thing in supporting their workers don’t suffer at the hands of those who are willing to take advantage of people who otherwise have no power. Especially given that said “government” at all levels (currently crippled and destroyed by the “free market” Friedman crowd) has been whittled down to providing almost NO social safety nets at all.

ALSO, I do not think it is a given, writ-in-stone proposition, that companies HAVE to make a certain amount of profit. In the current “free market,” anti-regulation, free-for-all period we are living through, companies are forgetting that they make their money off the backs of the people who actually do the work. In reality these companies can well-afford to make less money at the top for themselves and “investors” and give more back to the people struggling just to keep a roof over their heads, stay healthy and feed themselves and their loved ones.

Gross inequities in a society are pretty blatant indicators that the current mode of operation is NOT working in a balance way, and that imbalance has historically proven highly detrimental to the entire society, those at the top included (at least eventually). If there is no moral imperative written into the “free market” then the only thing “free” about it is the freedom for the powerful to take advantage of the weak in order to remain powerful. If companies are not going to do the right thing on their own, then they need a little help, and unions and government can both play a role in providing the correction needed to balance out the equation.

The key is direction and control. Many people value the Independence which this arrangement gives them.

Status as an employee has always been available in many jobs.

I am concerned that this rule is an attempt to get tax collection increased and faster.

In the final version of AB5, journalists have an exemption if they jump through a couple of hoops. Hoops that no one else has to jump through. And they can’t do it more than 35 times a year. A limit no one else has. And which prevents publications from developing long-term relations with a freelancer. Weekly columns, for instance, have to run more than 35 times a year.
There’s another way out for writers, and everyone else, for that matter. It’s to set up your freelancing business with all the paraphernalia of a business, which sounds like a good way to go but it’s not gonna work. Freelancers just aren’t businesslike.
And there’s more. Certain other writers have blanket exemptions, but not all writers. Graphic designers have blanket exemptions, but not interior designers. And so on.
It’s driving customers crazy. Freelancers of all kinds are already seeing markets dry up because it’s just too complicated for their customers to follow. KQED announced it won’t be using freelancers anymore. A writer in San Diego lost an Arizona market. And so on.
And there’s yet more. Copyright is the lifeblood of freelancing, and being classed an employee takes all copyright away. Employees don’t own what they create for their bosses. The bosses own them.
By taking copyright from freelancers-turned-employees, AB5 is undermining all self-employed workers who rely on copyrights and patent rights for a living. Even though copyright is called out in the US Constitution as vital to the national interest. Only for the bosses, though, I guess.

Can the Climate Catastrophe Be Stopped?

I appreciate Tepperman’s insightful report on the Army Corps of Engineers project to deepen the Carquinez Strait, accommodating oil supertankers. The Army Corps claim that the project will also give us environmental benefits is laughable. Deepening this channel two or three feet will damage the health of the Bay and its marine life as toxic pollutants are stirred up and increased numbers of tankers collide with marine mammals. If nothing is done to stop the dredging, which is surely linked to the development of petroleum infrastructure to process tar sands oil and even coal shipments, then I fear there will be no stopping climate catastrophes.

Stop eating food. Stop breathing. Stop using cars or busses or electricity. Because of fish? Because of carbon dioxide? Come-on, don’t be stupid! Every year, the spring runoff brings far more sediment to the bay than this dredging will cause. These environmentalists would kill us all off to reduce population if they could get people behind it.

Are You Protecting the Mayor?

The Express’ coverage of this story gingerly and delicately dances around the issue of improper conduct by the Mayor. It’s almost as if they are trying to protect her instead of actually conducting the task of investigative reporting this story deserves. In the meantime, the EBX has been thoroughly scooped by Ken Epstein of the Oakland Post, who just reported that the City Attorney has determined that the Mayor illegally pushed the resolution for Oakland Promise through while the Council was on recess — violating a law known as Rule 21. Time to step up your game, EBX.

The best support for Oakland Promise’s mission that the city council could do is rescind it’s certification of Measure AA’s ballot results. Then the mayor and council, having set the table for collaboration and rebuilt trust, can craft a replacement for AA, where all the city and community stakeholders are involved. That would be a replacement that does not have AA’s flaws — forced charitable contributions from homeowners to Oakland Promise, favoritism for Oakland Promise over other community providers, a 30-year duration, insufficient (and Oakland Promise-friendly) oversight structure. These issues are real. I have never voted against a local tax measure, but I did vote against AA.

Turning Around Lives, One Student at a Time, News, Sep. 17

Powerful stuff. He advocates for Restorative Justice in every school. I wonder if he ever apologized or otherwise made good to the people whose car he stole and other of his victims of the past.