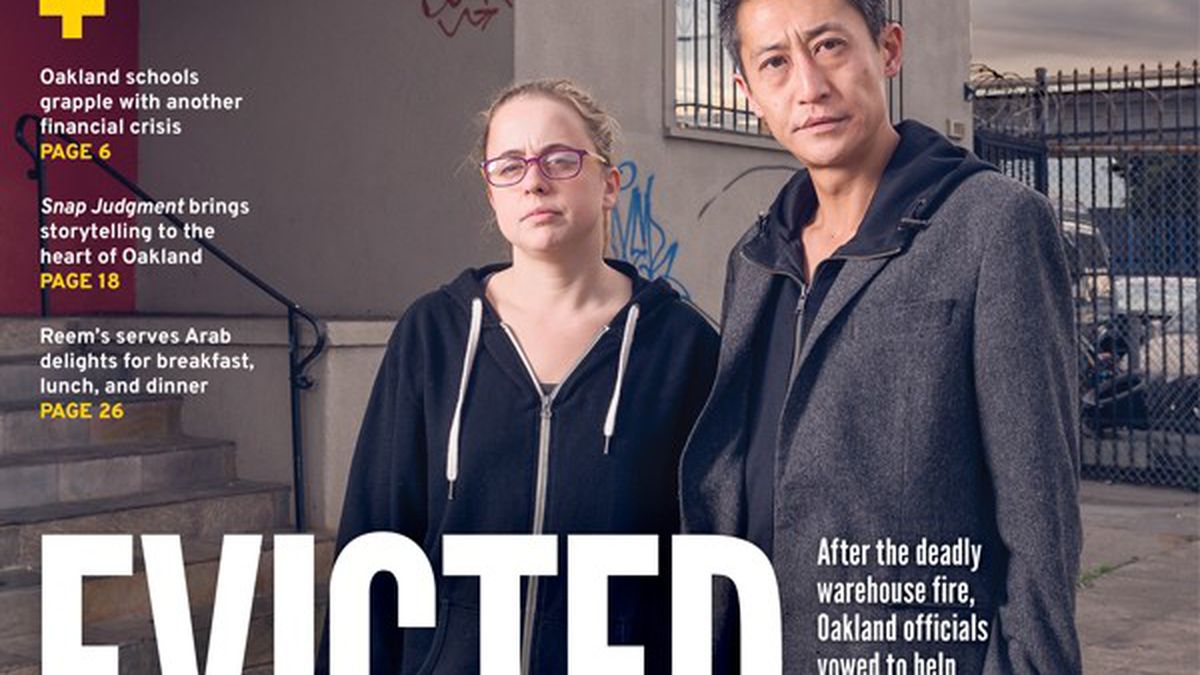 Letters of the Week: Our Readers Chime in on Ghost Ship, Reem’s and our Eco Watch Story

Because safety is Immigration and Customs Enforcement’s (ICE) Homeland Security Investigations’ (HSI) chief concern during operations, our special agents regularly request assistance from local law enforcement personnel to provide support for officer and public safety. Local law enforcement is best suited for this, as they have an established relationship with the community and knowledge regarding local traffic patterns and other logistical considerations. On the day of our operation, two OPD police officers assisted with traffic control and neighborhood safety.

Due to the ongoing investigation, additional information is not available at this time.

Never Seen It So Bad

As an abalone diver who’s been diving for over 25 years, I’ve never seen it so bad. Places I’ve dived for years are now a barren wasteland of urchins.

This is a problem that I believe can be repaired. Bull kelp seed will lay dormant for years and grows fast. We, as the stewards of our oceans, must take action. Instead of taking your abalone, get a take for a bag of urchins. The California Department of Fish and Game could also put some of our tax dollars to work and hire these out-of-work urchins divers to clean up and harvest these purple urchins. The starfish are coming back slowly, but it’s up to us to fix this. A handful of urchin divers could clean up a cove in a day, and within a matter of weeks, the kelp will start to return.

We divers also need to press Fish and Game to allocate money for the cleanup of our ocean; $10 million is a drop in the bucket compared to the total collapse of one of the last great wild abalone populations in the world. I call on every sportsman and woman to take action and put pressure on Fish and Game to fix this. It can be done if we take action now.

Let’s not wait on Fish and Game to do nothing — which we all know will happen. Sometimes nature needs a little help. Starfish are coming back, but without an effort to rid some of these coves of urchins, there is no way the starfish alone can solve this by themselves!

The time for action is now, so please get involved, and let’s make sure your kids have the opportunity to enjoy one of nature’s greatest delicacies!

Thank you for publishing the article by Alastair Bland. It was well written, informative, and very interesting. The topic is complex on several levels, but the author was able to convey in a short article a comprehensive explanation of the problem and the ancillary factors involved in it. I have a better understanding of the collapse of the abalone fishery and the impact of urchins on kelp forests now.

Janelle Bitker’s review of Reem’s in Oakland glosses over the reason for criticism of Reem’s giant mural of Rasmea Odeh. Odeh is not simply “controversial”; she is a terrorist, convicted in the bombing of a Jerusalem supermarket in 1969. Her actions killed 22-year-old Edward Joffe and 21-year-old Leon Kanner. Odeh confessed, and her co-conspirator has freely described Odeh’s role in a TV interview.

Odeh was freed in a prisoner exchange in 1980 and subsequently immigrated to the United States, lying on her immigration form by hiding her conviction. This fall, she was finally stripped of her U.S. citizenship and deported to Jordan.

By honoring Odeh, Reem Assil makes it clear that certain members of the community are unwelcome. Reem even attempted to sue a group of citizens, mostly seniors, for holding a peaceful vigil outside her cafe.

The moral equivalent of Reem’s would be an Israeli restaurant with a giant mural of the terrorist Baruch Goldstein, who murdered Muslims at prayer. Reem would certainly feel unwelcome in such an establishment, regardless of the quality of the food. Perhaps then she will understand why the Jewish community considers her glorification of a murderer of Jewish students to be repugnant.

You’d have to go to a lot of effort to miss Reem’s warm welcome. Maybe some people didn’t catch the memo about the Jewish high holidays dinner she hosted, along with countless community gatherings for causes and people across the beautiful spectrum of our Bay. The food may be amazing, but it’s the inclusive community that makes Reem’s irresistible.

Brown Is a Phony Environmentalist

I was glad to see your publication of Alastair Bland’s article exposing Gov. Jerry Brown’s lies regarding his phony environmentalism. Brown talks a good game about the environment, but his actions belie that talk. Hopefully, our next governor will be more a lot more progressive than Brown, and we can actually get some meaningful reductions of greenhouse gas emissions in California.

Liza Tucker and James Hansen are quite correct that Brown’s cap-and-trade program doesn’t actually reduce greenhouse gas emissions substantially, if at all. This program, in fact, does more harm than good by allowing polluters to emit as much or more than they already are, and it was basically designed by the oil industry. Brown said in Bonn, Germany that he prioritizes cars over the environment (he said on camera that we need cars, and we therefore can’t keep oil in the ground). Prioritizing anything over the environment is an anti-environmental position because protecting the environment is all about prioritizing it (no one wants dirty air or water, and everyone likes beautiful natural views; it’s all about priorities).

Despite his lofty rhetoric, Brown has been awful on the environment. He vetoed an oil extraction tax (which even Texas has), has prevented a fracking ban in California, and has pushed to further destroy the delta by sucking even more water out of it with his harmful water project — to list just three examples.

Regarding Brown’s industry-created cap-and-trade program: cap-and-trade is more of a scam than anything. If Brown really wanted to lower greenhouse gas emissions, he would support direct, simple, straightforward emissions caps. The “trade” portion of cap-and-trade allows polluters to continue to emit the same amount of pollution if they claim that they’re paying for some environmental protection elsewhere. Not only does this fail to reduce emissions, it also harms poor people and people of color, who are the main ones who live near pollution-emitting industries. There are very good reasons why many environmental groups and environmentalists opposed Brown’s cap-and-trade program.

Finally, regarding Brown’s totally disrespectful response to Keep it in the Ground protesters in Bonn (“Let’s put you in the ground so we can get on with the show here”), that comment was made to a group largely composed of American Natives. Brown should apologize to the entire Native community for that disgusting remark.

Jerry Brown has become just another corporate Democrat. Let’s elect a much better governor next time so that we can get some real emission reductions in California!

He probably collected $15,000 in rent a month [from his subtenants]. Scum. Of. The. Earth. He, the landlord, and the city deserve a percentage of fault. And if it weren’t for the fact the Bay isn’t big on personal responsibility and morality, the city could have stayed out of it. But fact is, most slumlords, master tenants, and scammy roomies here don’t have an iota to give about their tenants.

The landlord deserves the most scorn. She has collected at least $1 million in insurance money from this fire, and she has yet to apologize or show any remorse for the lives lost.

The only thing deserving of “scorn” here are people like you — Robert Gammon (a journalist I used to respect) — who, rather than investigate a story, decide it’s easier to stick to the status quo and continue to heap blame where you find it easiest. Almena, the media villain, deserving of all of your self-righteous scorn. You should be ashamed, and please stay away from this story and our community’s grief. You are not worthy of commenting on this matter anymore.

The Nov. 22 Seven Days column, “Why Oakland Should Cut Off ICE,” misspelled the last name of an immigration rights attorney of Centro Legal De La Raza. It is Jackie Gonzalez — not Gonzales.