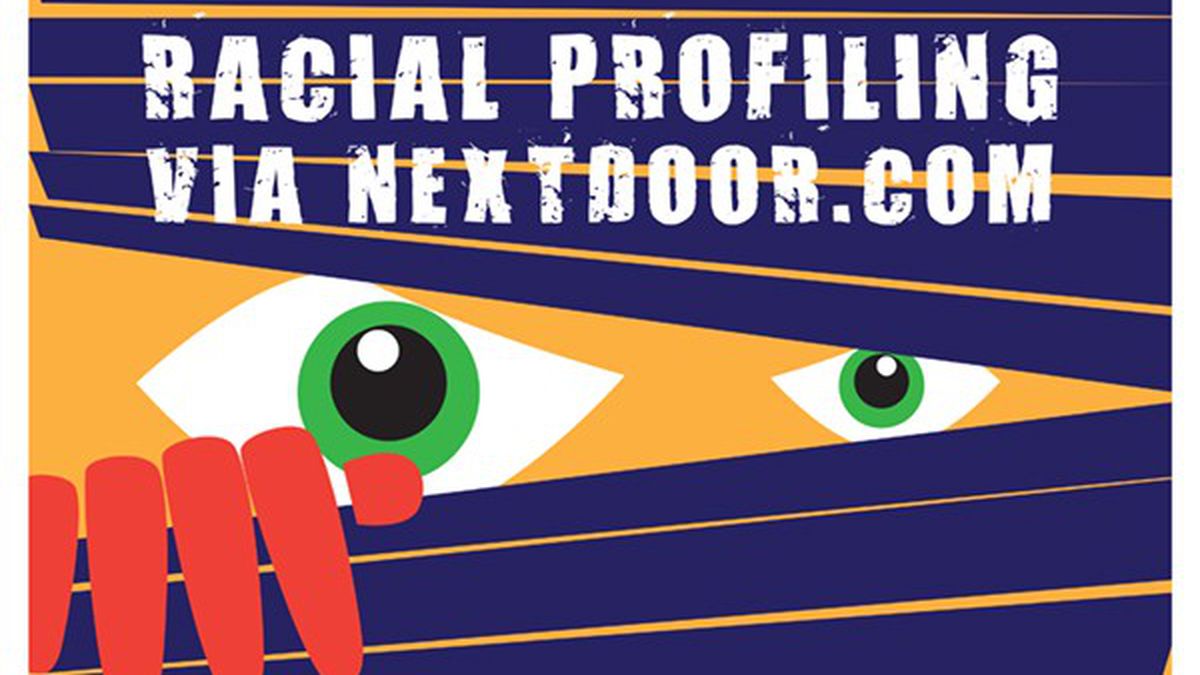 Letters for the week of October 7-13

We founded Nextdoor with the belief that when neighbors start talking, good things happen. Four years and 77,000 neighborhoods later, we continue to be amazed by the enthusiasm and passion that neighbors have to make their local communities stronger and safer.

The vast majority of interactions on Nextdoor are positive, but recently Nextdoor has been at the center of a few press articles, including one in the East Bay Express, about a very difficult issue facing our neighborhoods today: racial profiling.

We are incredibly saddened that some neighbors have used Nextdoor in this way. Simply stated: We consider profiling of any kind to be unacceptable. Our product is about fostering healthy conversations amongst neighbors. We explicitly prohibit profiling in our guidelines. Further, if we are notified that a member has violated these guidelines, we will take action and prohibit them from using Nextdoor.

We consider profiling of any kind to be unacceptable — and the opposite of being neighborly. Moving forward, we are creating ways to remind members of these guidelines when they post in the Crime and Safety section. We are investigating better techniques for keeping divisive discussions productive, and we are partnering with conflict resolution experts for training and product feedback. This is an important cause for us and we won’t let up.

Of course, one of the best ways to combat profiling is simply to get to know your neighbors. Racial profiling and other unneighborly behaviors often arise from not having relationships with those around us. Many neighbors tell us that they are using Nextdoor as a vehicle to create the change they want to see in their local communities. Let’s use our common bonds to come together, engage in constructive dialogue, and end profiling once and for all.

Nirav Tolia, co-founder and CEO of Nextdoor (reposted from Nextdoor.com)

Thank you for this article. I am white and my wife (who is also white) is on Nextdoor and has told me about these posts. I haven’t joined Nextdoor because I didn’t want to get involved in aggravating comment threads. This article made me realize that by not taking part, I am taking advantage of my white privilege. I am a mom, and if I had a black child I think I would feel that I had to be involved for my own child’s safety. I would want to know who in the neighborhood is profiling him/her, and other people of color, and might make a call that could create a dangerous situation for my kid. So, I am newly resolved to join Neighbors for Racial Justice and start making my voice heard on Nextdoor to support those who are trying to keep neighborhoods safe from police and private security violence.

Whites Are the Real Victims

Nextdoor is overwhelmingly used as a soapbox for militant activists and classifieds. Most of the racism I read on Nextdoor is scapegoating of white people. Amongst my circle, we call the site PoisonousNeighborNextDoor. Not surprised the Express chose a BS narrative.

The covert and not-so-covert racial bias detailed in the article is still rampant in our culture, and certainly in the hills area of Oakland. It’s not restricted to Nextdoor; the neighborhood listservs and National Crime Prevention Council groups have been operating this way for years and it has done material harm to the African-American residents in those neighborhoods. What I find most helpful about this piece is that it really goes to great lengths to interview people involved and discusses the fears, the anger, and the damage that this fear and suspicion cause. I’ll rejoin my listserv; I left it in disgust a few years ago after being annoyed by precisely this kind of behavior from some of the members.

It’s not just Oakland, I’ve lived in North Oakland and South Berkeley for sixty-plus years. We also have Nextdoor in Berkeley, and I’m a member, and we have the identical situation here. At least 20 percent of the communications on Nextdoor consist of alerts for “suspicious” persons of color.

I personally know of one instance where a call was made to the Berkeley Police Department by one of our newer white neighbors —on a Black senior citizen who supposedly “had something going on in his house.” The police came to the man’s house, had him down on the ground with a gun to his head, ransacked his house, took him to jail and kept him there two days before releasing him. This happened on Harmon Street in Berkeley. Since our neighborhood has become more gentrified, the Berkeley police are more aggressive and as quick to profile Black residents as the Oakland police. We own three houses in Berkeley and I’ve been stopped twice in the last year and asked “am I on probation or parole” for nothing more than being a Black man walking in my neighborhood. It’s crazy.

This stupid crap pops up in my neighborhood in Richmond as well. And people are all “if you see something, say something! Better safe than sorry!” It’s not as common as described above, but I’ve had to pipe up more than once. I’d rather be a “pc police” than a bigot, but maybe I’m just cray-zay like that.

It’s Not a Bug, It’s a Feature

The story stated: “Fear can really drive the application of bias.” Or the app of bias. Nextdoor needs slick banner ads: “Prejudice isn’t a bug, it’s a feature.”

But seriously, putting this awful stuff in writing can be an opportunity for people to see their own bias. It’s harder to say, “Oh, I didn’t mean it like that.” That is, if somebody bothers to call them out.

I would hope that the other councilmembers who have not expressed opposition to this scheme will now take a stand against it. The least they can do is speak up against this attempt by Big Coal to harass opponents. It is shocking that only three have spoken in opposition to shipping coal through Oakland to China and would put the promise of a few hundred temporary jobs over the health of Oaklanders and the planet.

What the hell is wrong with the other councilmembers? Are they ignorant or in the pocket of [Phil] Tagami and Big Coal? Perhaps they see a future in the private sector and can slip through the revolving door like Jerry Bridges and use their insider status to set up their own logistics firms, or opposition research agencies.

Darwin BondGraham’s incisive investigative reporting on the insidious attempts of coal industry hired guns to manipulate Oakland’s political process was an excellent piece of journalism. We should be proud and grateful to have such a talented and dedicated reporter in our midst. We should also relentlessly dissect Big Coal’s claim that coal trains will bring “jobs.” How many? How much will those jobs pay? Who will get the jobs? How long will the jobs last? I say, Coltrane, not coal trains.

“Can Legal Weed Save the Music Industry?” Legalization Nation, 10/7

Amoeba’s Problems Are Its Own

Please believe me when I say any problems Amoeba Music is having are not totally the fault of the music industry being in the dumps; the primary problem is its business practices.

Its stock sucks, its prices are high, and worse of all, its buyers alienate potential sellers by engaging in infuriating cherry-picking. The Berkeley Rasputin Music [store] has stock and prices that are about ten times as good as Amoeba’s. The Berkeley Rasputin is the number-one choice for local sellers. Amoeba’s problems are all its own.

Hopefully selling legal weed may help, but I’d guess it will only work if they sell weed far, far differently than they sell music.

I certainly hope folks will boycott this bank [Summit Bank] until they change their minds.

Other Banks Have Bus Stops Out Front

The Dimond district has a Wells Fargo and a Bank of America on opposite corners, both with bus stops in front. This is a major intersection with hundreds of people getting on and off each day and no problems. Perhaps AC Transit should do a survey of all the bus stops it has that are close to banks to see if there have been any instances of robbery that support Summit Bank’s fear.

We Don’t Need Another City Department

Mayor Libby Schaaf’s new Department of Transportation wouldn’t have changed this outcome and instead would mean less money to fix the potholes and rough pavement Line 51 travels over every day.

I don’t think this is a matter of staff incompetence as much as it is bowing to political pressure with money behind it all. It’s more a matter of corruption. There are three stops in Berkeley that I can think of in front of banks. One, in fact, is the major AC Transit hub downtown with tons of people and buses. The corruption extends to so much of city business, including any matter coming up before the Planning Commission. Money-laden developers always get their variances with total disregard for zoning regulations.

A wonderful, thoughtful essay about a man who elevates humanity.

Berkeley has chosen to take an incredibly decisive leadership stand in the immigration debate, and I am proud that our city council got something very right. Our immigration system amounts to nothing more than global apartheid. No human being is illegal, and the clowns who are whining about “illegal” immigration should ask the Native Americans what they think about the immigrants who have been terrorizing and occupying since 1776. Look at yourself first, before pointing the finger of blame at others. That whining is not just immoral, but fundamentally un-American.

Let us not forget that America is a nation of immigrants, and it is the immigrants who are a key driver of our economy and the weavers of our basic social fabric. Enough of this racism and xenophobia. Thank you, Berkeley City Council, for taking such a clear moral stand for the basic values that make America great, and getting something very right for once.

Pick and choose the laws you obey. Isn’t that exactly what criminals do? Like it or not, the City of Berkeley is within the boundaries of the United States of America, subject to US laws. If that city — or any other — chooses not to obey US immigration laws and defies enforcement, it is a city of criminals, advocating criminal behavior.

Pick and choose whether or not to feed a parking meter in Berkeley. Tear up the ticket — because, in Berkeley, California, you have the right to choose what laws are to be obeyed and which ones are to be ignored. Do so and find out how the “tolerant” City of Berkeley behaves when it comes to laws they choose to enforce.