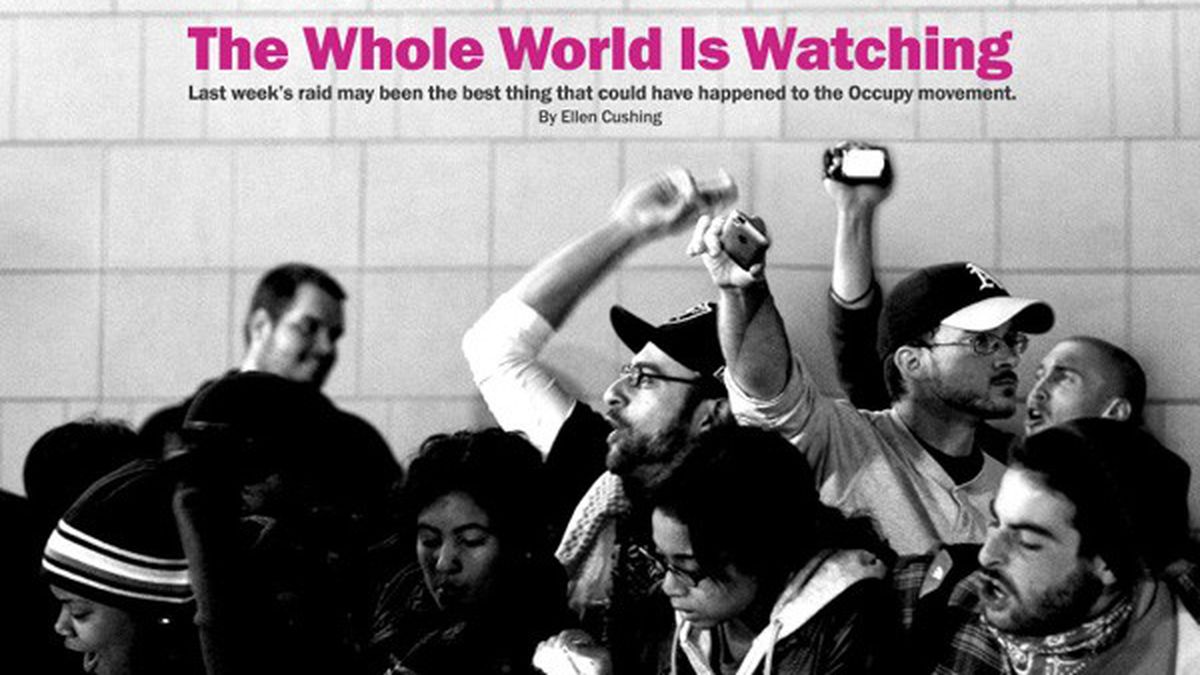 Letters for the Week of November 16

Readers sound off on Occupy Oakland and Actor's Ensemble of Berkeley.

One of the things that I learned from the Civil Rights movement is that boycotting works. You don’t have to beg the one-percenters to do the right thing, or have the government try to legislate that they do. Even if there are laws, most one-percenters have high-priced accountants and lawyers who can get them around the laws. Just don’t buy what they are selling. Money talks!

Disrupting life in Oakland is not going to solve the problem. Oakland is not Wall Street! Oakland, like most cites, is next to being fiscally insolvent. Instead, occupy some of the megacorporations’ property, and the headquarters of the major banks. Pull your money out, or make a real threat to do so.

The Occupy Oakland movement proposing a citywide strike on November 2, 2011, to liberate Oakland was not something that I was asked about as an Oaklander. I graduated from Oakland High School, and both of my children graduated from high schools in Oakland. I also operate a small business in Oakland. No, I’m not a one-percenter. Asking workers not to go to work, and students not to go to school, and that people converge on downtown Oakland to shut down the city hurts not only the students, and many of the small business who were already hurt by the confrontation that Oakland police had with the Occupy Oakland protesters on October 25, 2011, but is invariably counterproductive. You’re preaching to the choir in Oakland.

Yes, the whole world is watching. I am just as angry as the any of the Occupy Oakland protesters in this country and around the world about the disparity in income between the rich and poor. I totally get it. But if people are serious about effective change, boycott companies that ship jobs overseas, and those that don’t pay their fair share of taxes. Don’t displace your anger on poor cities like Oakland, a city that is represented by the most progressive congressperson in the country, Barbara Lee. Her actions speak louder than words. Go to congressional districts where the congresspeople do not support what you are doing. Even the mayor of Oakland, Jean Quan, supports what you are doing, but not your tactics. In a true democracy, there is give and take, not everyone gets everything they want.

Boycott the one-percenters! We, the people, will be responsible for forcing the one-percenters to bring jobs back to America, and to stop exploiting people around the world with slave labor. We’ll be instrumental in creating jobs in this county and significantly decreasing unemployment. We can help to put America back to work.

Occupy Oakland can be the new vanguard in directing the other Occupy movements to start boycotting the one-percenters. That would be a true revolution!

Thank you for your cover story detailing the recent Occupy Oakland happenings. I wanted to comment on something you wrote: “… and the unnamed, wheelchair-bound protestor ….”

As an attendant for a disabled man, I once used this same term — “wheelchair-bound” — and he promptly corrected me. He told me to think about the meaning of being bound to a wheelchair. I hadn’t realized that it was an inappropriate way to describe persons in wheelchairs. No one had ever told me otherwise. Lucky for me, he wasn’t offended, but assured me that many people make that mistake not completely knowing which language is most appropriate. Since then, I have been careful how I address persons with disabilities.

Anyway, it’s not easy being a writer. May you continue to write with truth and vigor.

All Eyes on Oakland

The raid in Oakland may have been great for getting attention turned to Occupy Oakland, but it was the worst example to show the world. Up to that point, protests against the economic and monetary disparity between the so-called 99 percent and the so-called 1 percent demonstrated to the world that protests in this country, even on a large scale, were dealt with as an exercise of our freedom of speech. In the snap of a finger, that image was shattered.

Whether there was a risk to those assembled or not, the use of the police, for that short period of time, put us visually in the category of the Arab Spring. Both sides should have stopped and thought about the issues involved and the impact of their actions.

Whether the protests are justified or not is not the issue. Why would the Oakland police be sent to disperse a relatively peaceful crowd? The mayor used extremely bad judgement, in my opinion, especially when the rationale was that the police were sent out of a concern for the welfare of the protesters. It had to be anticipated that there would be a less than peaceful engagement because, unfortunately, not all of the protesters were there just to express free speech.

How do we redeem our world image once again? How do we redeem our souls once again? There will be no massive monetary policy changes, nor will there be any quick fix to the economic problems, which are now a pandemic. The European Union is falling apart because of social policies which have led to money issues, and there are the worst famines in recent history in several parts of the world. It’s time that we, as a nation, stop the bickering and partisanship, and got to work fixing our broken systems. Is ideology the new true religion? After September 11, 2011, we did it, why not now?

What a great story! Great in that it was compelling and so well-written — it’s clearly not so great for Dewayne Stancill and the city’s police force. I just bought a house in San Leandro and none of this was in the welcome packet.

Well-done, and thank you.

The “waste” from the aquarium is seawater piped in from Monterey Bay and returned to the bay after circulating through the aquarium’s exhibits to sustain 35,000 sea creatures, from giant kelp and strawberry anemones to sharks, shorebirds and sardines.

It is subject to 20,000 water quality monitoring tests each year, and is cleaner when it returns to the ocean than it was when it came into the aquarium hours earlier.

Aside from rain runoff, all of our freshwater waste goes into municipal sewer lines for treatment, including the water we use to hose down our awnings and sidewalks, which we divert before it makes it into storm drains and flows into the bay.

Has no one noticed that community theater groups are struggling hereabouts? And that it is very unlikely that any existing nonprofit is waiting in the wings, with a bucket of money, ready to pour it into fixing up a space that belongs to someone else? All to take over a modest venue in a shared community center? On terms to be dictated by the city?

Seems to me that Actor’s Ensemble and the City of Berkeley need to sit down and talk about their shared interests, and see what they can work out together, so that the building can be improved gradually without uprooting the theater.

I know from being somewhat on the inside, as acting president Jerome Solberg’s mom, that these actors give 300 percent of themselves to maintain quality shows, which require scenery, lighting, sound system, costumes, music, special effects, advertising, etc. The plays are very well directed as well as produced by some very talented actors who just do it out of love for creativity, camaraderie with the community, and those who appreciate the fine literary fare they produce and enjoy. I think the city is out of line to demand all the things mentioned, which I think they know will bring this group down, which would be such a great loss of good entertainment. It sounds to me like a bureaucratic move to make the city look good with the new refurbished playhouse, when in reality they want someone with deep pockets to foot the bill for them. I wonder if they do this, if they will get the quality actors holding the playhouse together, as well as the already popular reputation and community support this group has now.

Of Monsters and Men

The Day After: Saviours and High on Fire’s Triumphant Homecoming at...