.The One Percent Solution

Business groups dominated by representatives from large corporations lobbied for the crackdown on Occupy Oakland. 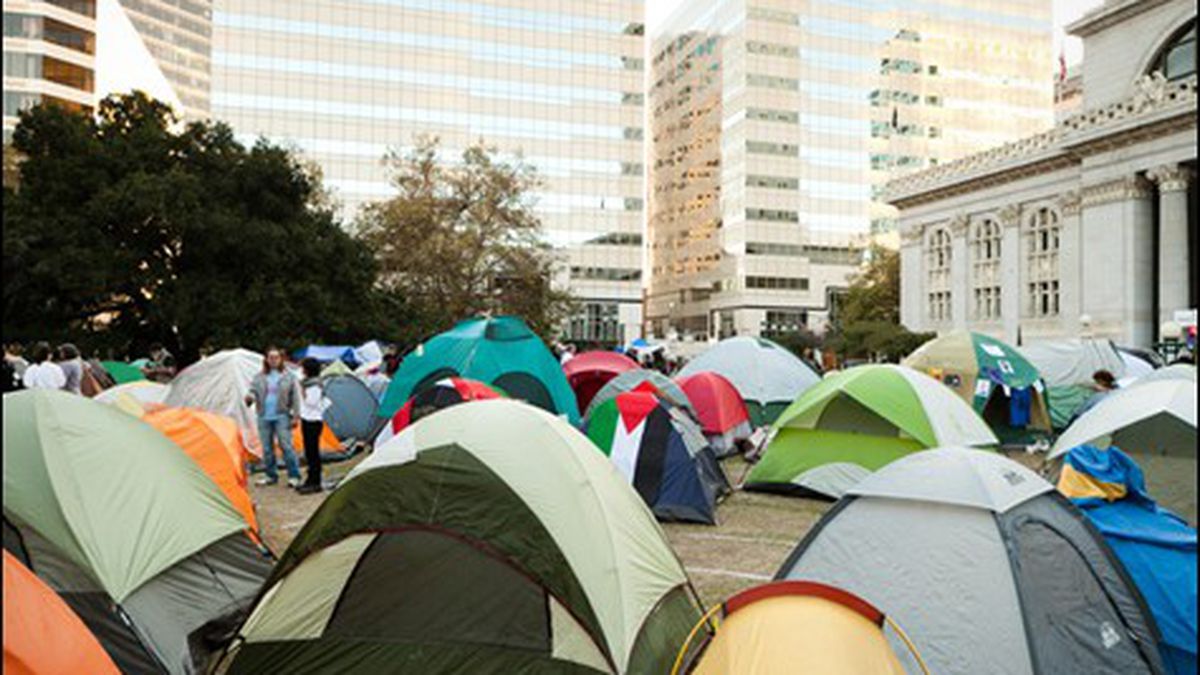 During the past few weeks, numerous people and organizations called for the second police raid on Occupy Oakland. Among the loudest and most influential voices demanding the crackdown were the Oakland Metropolitan Chamber of Commerce and two Oakland business groups. They contended that the City Hall encampment was bad for downtown businesses, especially small ones. The chamber and the business groups also purported to speak on behalf of small businesses in downtown. However, a closer look at the organizations reveals that they are dominated by representatives from big corporations, and in fact largely represent the so-called One Percent that the Occupy movement has been targeting.

A majority of the chamber’s board of directors and executive committee come from large corporations that post billions in annual revenues, including big banks, telecom corporations, development companies, real estate conglomerates, and investment firms, according to the chamber’s own records. Similarly, the Downtown Oakland Association and the Lake Merritt/Uptown District Association are controlled by representatives from large corporations and major property owners in the area.

But some small business owners in downtown say they don’t want the chamber and the business groups speaking on their behalf. “They don’t represent small businesses,” said Maria Gastelumendi, owner of The Rising Loafer Cafe and Bakery, who noted that her business actually increased after Occupy Oakland arrived. “They haven’t come and asked me how I feel,” she added, referring to the chamber and the business associations. “In the seven years that I have been here, they have never once approached me — because I’m not a chain. I’m not a big-box store.”

Tim Gallen, a spokesman for the Downtown and Uptown/Lake Merritt business associations, acknowledged that the organizations are controlled by people employed by large companies and major property owners, but said that nonetheless many small businesses that are members of the associations have been harmed by Occupy Oakland and the protests that have resulted in violent clashes with police. “It’s created a situation where people are afraid to come downtown,” he said. Gallen said he would provide a list of small businesses that have been hurt by Occupy Oakland, but did not.

Based on anecdotal evidence and a survey by the small-business group Local Business Liaison, it appears that some small businesses actually prospered during the Occupy Oakland encampment, while others experienced sales declines. Downtown bars, convenience stores, credit unions and local banks, and some cafes reportedly did well, as did DeLauer’s newsstand. “The day of the general strike was the biggest day we’ve had and the day after was the second busiest day,” said Cortt Dunlap, owner of Awaken Cafe, referring to the cafe’s coffee cart. “And generally, it’s been business as usual,” he said of his sales during Occupy Oakland. “There have been slow days and busy days.”

In contrast, some higher-end restaurants and retailers, which depend on people coming to downtown who don’t work or live there, suffered. But it’s not clear whether Occupy Oakland was directly at fault or whether the businesses were hurting because of the public’s perception of the encampment. Over the past few weeks, the press focused heavily on the violent incidents with police, and as a result the encampment was perceived as being dangerous. Mayor Jean Quan, several Oakland councilmembers, and city officials also described the encampment as being unsafe and bad for the city, much like the chamber and the business associations did. Consequently, it was not clear whether people who don’t live or work in downtown were afraid to go there because of legitimate concerns or whether they were afraid that it’s unsafe based on what they’ve read or heard.

Regardless, the chamber and the business associations helped fuel a prevailing narrative about Occupy Oakland that may have eroded support for it: namely, that the encampment was hurting small businesses who are part of the 99 Percent, and for whom the Occupy movement is supposed to be fighting. However, the chamber and the business groups themselves are controlled by representatives of the One Percent.

The business groups are run by people employed by big companies and property owners because of a state law that favors such entities. Business associations such as the ones in downtown and Lake Merritt/Uptown, which are officially classified as business improvement districts, are quasi-governmental organizations that have the ability to levy fees against businesses and property owners within their areas, as well as lobby government and politicians.

But the system is somewhat undemocratic. Under California law, the vote (and thus influence) of each property owner or business is weighted based on how large they are. The more property a corporation owns in the district, the more votes it gets. As a result, these associations tend to be dominated by representatives from large companies and major property owners because they have the most votes and the most influence.

For example, the president of the Downtown Oakland Association is JC Wallace of SKS Investments — a major real estate investment firm that owns large properties throughout Northern California. Also on the board is a representative of The Clorox Company, which posted $5.3 billion in revenues last year.

The president of the Lake Merritt/Uptown District Association, meanwhile, is Deborah Boyer of The Swig Company, a major property investment firm that owns property throughout California, and in New York and Washington, DC. Other board members of the association include representatives from Kaiser Permanente, Oakland developer Signature Properties, and the CIM Group, another large property-investment firm.

In fact, the two associations share some members from some of the same large corporations, who then also sit on the chamber’s board of directors or executive committee. For example, the CIM Group has representatives on the boards of all three organizations, and Clorox has members on two. But as dominated as the business groups are by large companies, the chamber includes representatives of even larger corporations.

And that’s only a list of publicly traded companies that must report their annual revenues to the US Securities and Exchange Commission.