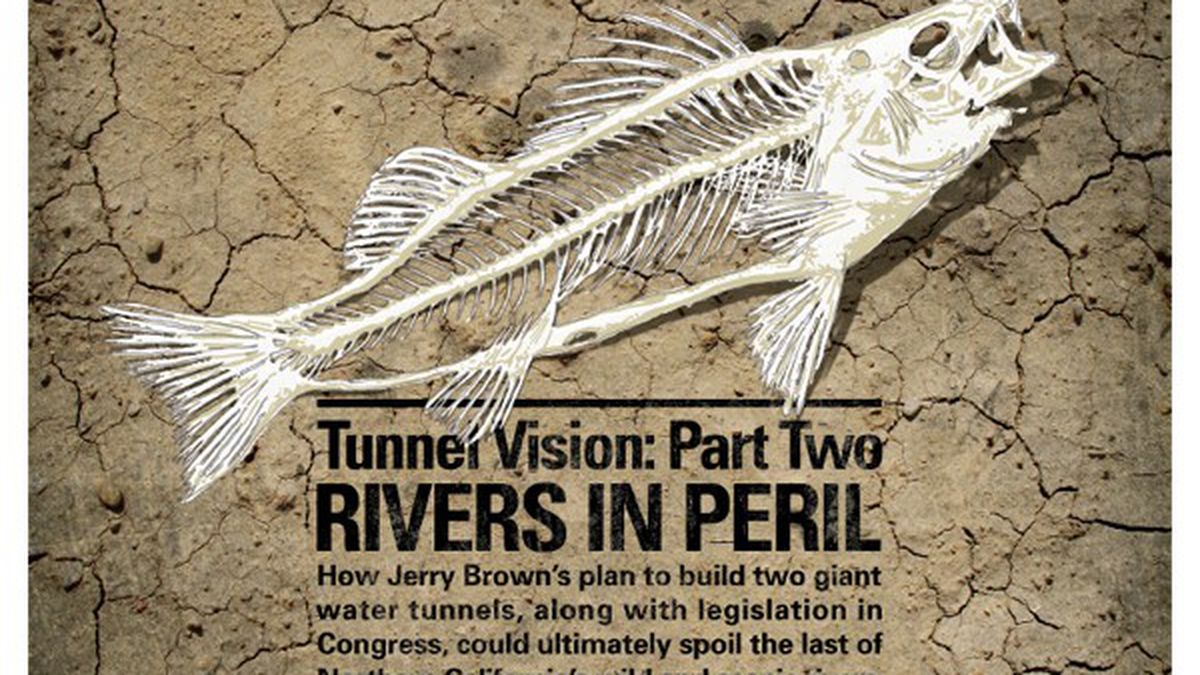 Readers sound off on water tunnels and "the bacon-wrapped economy."

The Bay Delta Conservation Plan (BDCP) is an issue of the highest public interest to all Californians. There is a great deal at stake for California. Consider, for example, that the BDCP is designed to directly address the risks and effects climate change poses to our state’s foundational water supply.

Over the last 100 years, sea level has risen 7.2 inches at the Golden Gate Bridge, and it is predicted to rise an additional 1.5 feet or more by 2060. Climate change is a very real threat, and preparing our most important infrastructure for its impacts must be a top priority for government at all levels.

At least 25 million Californians get some part of their water supply from the Sacramento-San Joaquin Delta, which flows into San Francisco Bay and once formed a vast estuary. The marshlands and floodplains are largely gone now, having been drained long ago to create islands of farmland ringed by more than a thousand miles of levees.

And along with providing water to millions of acres of farmland, the Delta also supports many species of fish, birds, and other animals that rely on its nutrient-rich waters.

At the same time the sea level has been rising, Delta farmlands have been subsiding below sea level. The aging system of levees, it is now recognized, cannot protect this critical water supply from being disrupted by the flooding that would occur in the wake of a large earthquake. Sea level rise in the near term poses less of a risk; however, in the long term, the impacts will be broad and definite, as Professor Jay Lund of the UC Davis Center for Watershed Sciences points out.

Earthquakes are a different matter entirely. This risk is very real and grows daily, particularly as water levels rise against levees. A professor of civil engineering at UC Berkeley, Raymond Seed, has studied the topic for more than thirty years. His conclusion is that it is not a matter of if, but a matter of when.

Noted UC Berkeley economist David Sunding has found that if a large earthquake were to shut off water deliveries from the Delta, it could cost our economy tens of billions of dollars. Add the threat of sea level rise, and the need for this long-term investment in the security of California’s foundational water supply becomes crystal clear. (Note that Professor Sunding is the only individual of the three noted above who is directly working on BDCP — neither Lund nor Seed have a financial relationship with this effort.)

These elected officials and organizations also know that the BDCP is rooted in sound science as a way to protect and enhance endangered and threatened species. The past seven years of work by a collaborative team of federal and state experts has resulted in a unique attempt to introduce conservation measures aimed at reducing a spectrum of ecological stressors for the benefit of 57 species, 11 of them fish.

Now, I want to take a moment to correct the record for your readers in regard to the designation of wild and scenic rivers. Some rather wild claims were made in Part Two of this publication’s series on BDCP. To be clear, our current governor was directly responsible for ensuring the Carter administration designated the Eel, Smith, and Trinity rivers as wild and scenic.

Those designations were historic, and we consider them a permanent treasure to be preserved for all future generations of Californians.

In addition, there seemed to be an effort to lead readers to believe that the BDCP lacks the support of key environmental groups. In fact, environmental groups have goals that are very much aligned with the state’s objectives. They have publicly said they want to see the BDCP succeed and have even proposed a conceptual alternative that mirrors the BDCP’s tunnel and restoration concept, albeit on a smaller scale.

Lastly, restoring the Delta and providing a reliable water supply for the security of the people and economy of the state is not the isolated notion of one governor. Governor Brown first proposed to take this action when he was first elected governor in the 1970s. Since then, one governor after another — George Deukmejian, Pete Wilson, Gray Davis, Arnold Schwarzenegger, and now Jerry Brown again — have supported the vision.

Why have so many governors supported taking action in the Delta? Because there is a very real need to improve the Delta ecosystem and build a more secure, reliable water system there. We can’t afford to delay any longer.

An administrative draft of the BDCP has already been released for the public to review. It can be found at BayDeltaConservationPlan.com. This fall, we anticipate the start of public comments with the release of the “public draft” BDCP. Our goal is to familiarize as many Californians as possible by then with the full range of impacts and benefits of the plan.

This piece is unusually well written — Cushing is quite talented and insightful, and makes many observations that are on the “Of course! Why didn’t I think of that!” level (e.g., “companies like Google and Facebook have grown so big that they’ve effectively become utilities,” etc.) But it’s marred by some logic failures. The article seems to bemoan the loss of old-guard (i.e., just plain old) viewpoints and approaches for their own sake and is generally anti-youth, intentionally or otherwise. The entire article bounces back and forth logically from discussing actual problems to mistaking trends and aesthetics for problems. Some of it’s just human or economic nature, and nothing to do with the young rich or the tech industry at all.

There is nothing at all wrong or weird or stupid about spending four times as much for designer pants (or whatever) than one might for the Walmart or JC Penney alternative, if the quality and style make it worth it to you. There is nothing off-base about a sandwich being four times overpriced at a restaurant catering to tech company execs and coders with huge salaries; the meals at exclusive old-money private clubs cost even more. People with a lot of money always spend plenty of it on “my version is flashier than yours” purchases, from clothing to food to vehicles to homes.

It’s an outright “this is different, so something must be wrong with it” fallacy to go after young tech workers for their consumption habits and display-of-wealth quirks simply because they’re less predictable, traditional, and stodgy than those of the rich a generation or two ago. The writer must unconsciously realize this, since the champagne-with-fireworks example of old-money excess is precisely, directly comparable to the techie examples the article opens with. Consumption and display habits and how they generationally and subculturally differ have nothing, other than accidental correlation, to do with the real points of the article — which are the changes we’re seeing in affordability of living in the Bay Area, in philanthropy, in the sustainability of arts institutions, and other broader social effects of the tech industry boom here — that are actually meaningful. Demanding to wear sweatpants instead of a suit at work is not a meaningful social effect any more than is the lack of 1880s top hats in the business district today (or their return, in steampunk fashion in the nightclubs). The writer is badly commingling signifiers of social tensions and instabilities with simple aesthetic trends and the tendency of the nouveau riche to explicitly reject the old-money values of their forebears just to make a point — not to mention the insistence of the young on doing what they feel is new and different (even when it’s mostly all rehash). That is ultimately just an extended “guilt by association” rhetorical ploy, and a “this seems goofy and unwise to me, so it must not only be a bad sign, but causative of, not just allegedly correlated with, actual social ills” literary device, with two more built-in fallacies.

It’s also wildly unsafe to make sweeping generalizations about techies with money, other than vaguely subcultural ones (e.g., most of them like science fiction more than their non-techie neighbors, on average). I’m converting a spare bedroom in my rented Oakland ex-warehouse loft into a library (Edwardian, not Baroque, if you want to know), because I consider it “turn[ing] that room into something awesome” and I don’t need another roommate. I don’t own a single video game console, and haven’t since 1997. Never been to Burning Man, and I find Burners increasingly tedious. I collect Art Nouveau antiques and contemporary art originals. I’m not in my twenties anymore either, but the monied geeks this article is trying to analyze are precisely the same as we were in the late Nineties and early 2000s, other than the fact that some styles have shifted.

It’s otherwise the same tech industry with the same people, other than some of the company names have changed, and so has where some of their headquarters are, and consequently where the gentrification is happening. (As an aside, we need a new word, since “gentrify” refers to the landed gentry, i.e., old money. This is different; it’s urban, comparatively young, and nerdy. Let’s call it geekification.)
Cushing could (should — she’s a hell of a writer) bifurcate this into two rewritten articles, one on the real issues relating to the monetization pressure being put on the arts, charities, and other institutions (whose traditions and even legitimacy are being questioned) by the ascendancy of the tech industry and its extreme concentration in the Bay Area. These need deeper examination. The other would be an entertainment and lifestyle piece on how upscale styles and attitudes are changing due to people being well-off at a younger age and in a meritocracy based on the information economy. This should be compared and contrasted with very similar trends in New York and elsewhere that have already been written about in detail, and which give the lie to this authors’ insistence that all of what’s happening is uniquely a tech-industry, West-Coast thing. But don’t try to correlate it in a serious way with major socioeconomic problems without a hell of a lot more evidence, from professionals in relevant fields like applied anthropology, economics, sociology, psychology, etc., not a string of quotes from self-important hipsters who are re-doing what me and my friends already did fifteen years ago, just wearing different T-shirts in a different neighborhood and calling themselves edgy.

Our June 26 music story, “Bridging Cuba and the Bay,” incorrectly stated that Pablo Menendez moved to Cuba at the age of sixteen. He was fourteen. Furthermore, in that same story, we misspelled the name of the school Menendez attended. It’s Escuela Nacional de Arte.