Readers sound off on healthcare, political will and Lynette Gibson McElhaney. 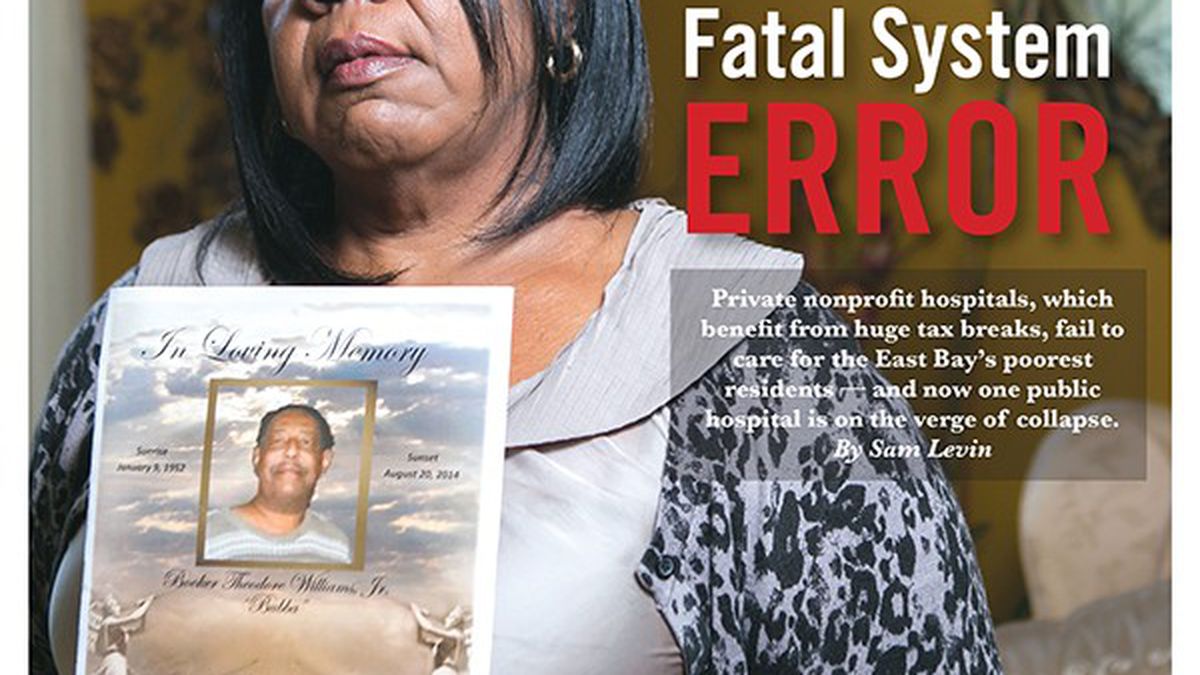 The County Is Shirking Its Responsibility

This excellent article brings to light the fact that not-for-profit hospitals in the East Bay, particularly Kaiser, fail to provide adequate care to the under and uninsured to merit the tremendous tax breaks that they receive. The financial struggles of Doctors Medical Center (DMC) and its $19 million annual deficit are also outlined. But there is an additional aspect to this story that should be told.

In Contra Costa County, Contra Costa Regional Medical Center (CCRMC), located in Martinez, is the safety-net hospital for Central and East County residents.  In that capacity, it receives $30 million per year from the county general funds and an additional $14 million from the state in consideration of its role as a safety-net hospital.  DMC provides an even greater safety net role for the residents of West County, yet it receives no such funding from the county or state. Although generally poorer than Central and East County, residents of West County are asked to pay higher property taxes for the privilege of having a hospital. Why is this?

Although the county has an ethical responsibility to distribute healthcare resources evenly throughout the county (let alone in the areas of particularly concentrated need, such as West County), it is not legally mandated to support DMC because it was created as a district, not county, hospital in the 1950s. This distinction is outmoded. In Alameda County, politicians have risen above the fray to reorganize hospitals to meet modern needs. There is no such political resolve in Contra Costa County. In 2014, county supervisors blocked a proposal for a county sales tax increase that could be used, in part, to support DMC. County health officials appear fearful that any effort to support DMC would cut into the extremely generous support that CCRMC receives.

DMC is the only hospital in West County to provide the tertiary-level services that John Muir provides to Central and East County. As such, DMC is crucial to the health and welfare of West County residents. During its campaign for the Measure C parcel tax last year, which would have raised an additional $20 million per year to eliminate DMC’s financial deficit, the Contra Costa Times editorial board advised the public “not to throw good money after bad” in support of DMC. Why is $44 million to CCRMC “good money” and any support of DMC “bad?”

Excellent article. Yes, we do have local inequities and tragedies in medical services. However, readers should also look at the much bigger picture. I suggest doing a Google search for medical expenditures by country. We pay about 50 percent more for healthcare than the next closest country, and about double the cost of the average developed country.

On top of this, we like our medical system far less than citizens in about every other western European country. I also suggest doing a Google search for “Time Magazine, Medicine Gets Personal” for the article in the December 29, 2014 issue with the same title. Dr. Garrison Bliss is creating a plan based on keeping people well and out of the ER with preventative care, rather than racking up fees for services rendered and pricey ER visits. He sees far fewer patients in a day, but spends much more time with each patient while earning the same salary by keeping people healthy.

We Need More Political Will

Creating affordable housing in Oakland is not about the academic exercise of studying the problem — it is about somebody on the city council having the political will to drive this issue until it is a reality. The facts are that Jerry Brown’s 10K in the Jack London district and downtown only created prime housing for the economic elite who spill over from San Francisco. The reality on the ground, based on Mayor Ron Dellums’ affordable housing study from 2006, indicated that land prices for an inclusionary ordinance will work in those two neighborhoods and in North Oakland (Rockridge and Temescal). Jeff Levin was a part of the city staff that prepared that study in 2006 and I am sure he would agree that those numbers are even better today. The problem is that the people in those neighborhoods not only do not want affordable housing, the politicians are afraid of having that conversation in public because race is always at the bottom of it. So they keep studying in hopes that it may go away.

The other problem is that the city council continues to react to every housing market fluctuation instead of maintaining the vision outlined in the General Plan. Decisions such as the one allowing Ellis Partners to build high-rise market-rate (expensive) housing in Jack London Square does not help. Maintaining the General Plan vision in that case would have been to say “no” to Ellis Partners. This would push the economics of the land out along the transit corridors where affordable housing could be built to coincide with the transit villages at BART stations and regional transportation projects like the BRT.

Where’s Nancy Nadel When We Need Her?

Lynette Gibson McElhaney long ago proved that she’s a chamber of commerce ally and supporter of the most retrograde elements in the Oakland Police Department. In other words, she’s just another in a long line of cookie cutter, fake “progressive” politicos who’ve been running our town for a while now. She and Dan Kalb were supposed to be a breath of fresh air when they joined the council; instead, they’ve fallen right in line with the status quo and have refused to rock the boat. Now it seems that Annie Campbell Washington and Abel Guillen have also decided to take the path of least resistance. Can we please have Nancy Nadel back?

The Council Thumbed Its Nose at the Express

To read this story, one would think that Lynette Gibson McElhaney had been recalled! Meanwhile, I live in her district, and though I’ve never had any political affiliation with her, I’ve been impressed with initiatives she’s taken to improve the neighborhood (e.g., conditions under the Broadway/880 overpass). She might well be re-elected if a vote were held today. So much for Mr. Robert Gammon’s overwrought attacks (and for any agendas that might lie hidden behind this peculiar vendetta). The council didn’t thumb its nose at the voters; it merely thumbed its nose at the Express.

Clearly, the defenders of Gibson McElhaney selectively ignore the facts, obscure the truth, and form a circle around her that smells of hypocrisy. On the face of it, with no denials from Gibson McElhaney, her behavior violated many basic ethical standards we expect of public servants. But the apologists who are openly insinuating racist motives by the Express, while screaming for tolerance, are muddying the waters. By closing ranks around Gibson McElhaney, they reinforce the impression that a black politician can do no wrong. I’ve lost a lot of respect for those who defend her practices.

BADW Is At Least Trying

About 80 percent of the statue awards, given by Bay Area Dance Watch (BADW), go to women — about the same percentage breakdown of female local dancers performing in the San Francisco Bay Area dance scene. Some of the awards are for theater and acting as well. We are especially happy about that 80 percent because most of the large dance companies in the United States are run by men. So we’re doing our small part to help make up for that unevenness on the national scene by doing it here in the local scene. BADW tried to award both the actor and the actress from the Shotgun Players’ Bonnie and Clyde, but because they were out of the country last year we could not get it arranged. The play was that good and it had the best blending of multimedia with live performances I’ve ever seen!

Thank you for the article about Dr. Roger Proctor and the anesthesia department at Highland Hospital. I’ve recently retired from Highland and have worked with all the doctors mentioned in the article. The climate of care has become increasingly business-oriented. There appears to be no more “mission statement” to care for the community “regardless of the ability to pay.”

Everyone appears to be working under great pressure to rush things through and the patients are caught in the whirlwind of activity. No person wants to be rushed when they’re having surgery. Important test results are not delivered in a timely manner. Some pre-surgery requirements, which should be finished days before surgery, aren’t completed. There is an often futile attempt to complete blood tests, important cardiac studies, or X-rays on the day of surgery. This may result in delays and sometimes cancellations. The end result? Frustrated, unsatisfied, apprehensive patients.

We as caregivers are trying to provide a safe and calm atmosphere for patients undergoing surgeries. Sadly, those of us who’ve dedicated ourselves to caring for the underserved are rarely appreciated by the administrators in charge. I’m proud to know doctors like Proctor, Francesco Isolani, and Starla Sills. They are patient advocates, committed to providing safe surgeries and a safe working environment where no one feels that their licenses are threatened or their jobs are on the line if they speak out.

Their Cause Is Not Just

The authors, Mary Noble and Ryan Heuser, make a distinction between vandalism to local businesses versus chain stores, excusing the latter. I did notice in reading the next day that two Walgreens Pharmacies as well as a Kelly Moore Paint store, both chains, had their windows smashed and were vandalized in Oakland. This is reprehensible! Walgreens serves the sick and elderly people in the neighborhood by providing convenient prescription refills locally. Kelly Moore sells paint to homeowners to spruce up their fences, doors, and interiors.

After that, I took a drive down to the Temescal neighborhood, and saw the intersection of Telegraph and 40th half covered with paint with white car tire tracks extending in various directions. The suitability of a chain or locally owned business should be determined by the purchasing power of the local community, not be me, the Express, and certainly not by night riding vigilante vandals no matter how just they think their cause is.

I am a black, 25-year resident of Oakland. Impact HUB Oakland in an effort to get members better acquainted with each other, hosts its Sexy Salad Lunch each Friday during the noon hour.

The attendees reflect the demographic of Oakland that has radically changed due in large part to former mayor Jerry Brown’s re-development schemes (in other words, they are overwhelmingly white and largely recent arrivals).

In informal conversations, I learn that many have settled in West Oakland — a district that was formerly almost all black and is now experiencing racial displacement (gentrification, a too vague term) — or other formerly black neighborhoods. Almost all have advanced degrees and are involved in social justice nonprofits or start-up businesses. They say they like Oakland and share this information to their associates in the cities where they have recent emigrated from.

In this and in similar networking situations occurring among newly arrived (mostly white) Oaklanders, I kindly suggest looking around the room and actively recruiting the few blacks who happen to be frequenting the venues you are inhabiting into being part of the business and nonprofit ventures you are discussing creating in response to your establishing residency in areas that used to belong to us and we are being displaced from.

If you just love Oakland so much, how about loving the black residents
enough to recruit us.