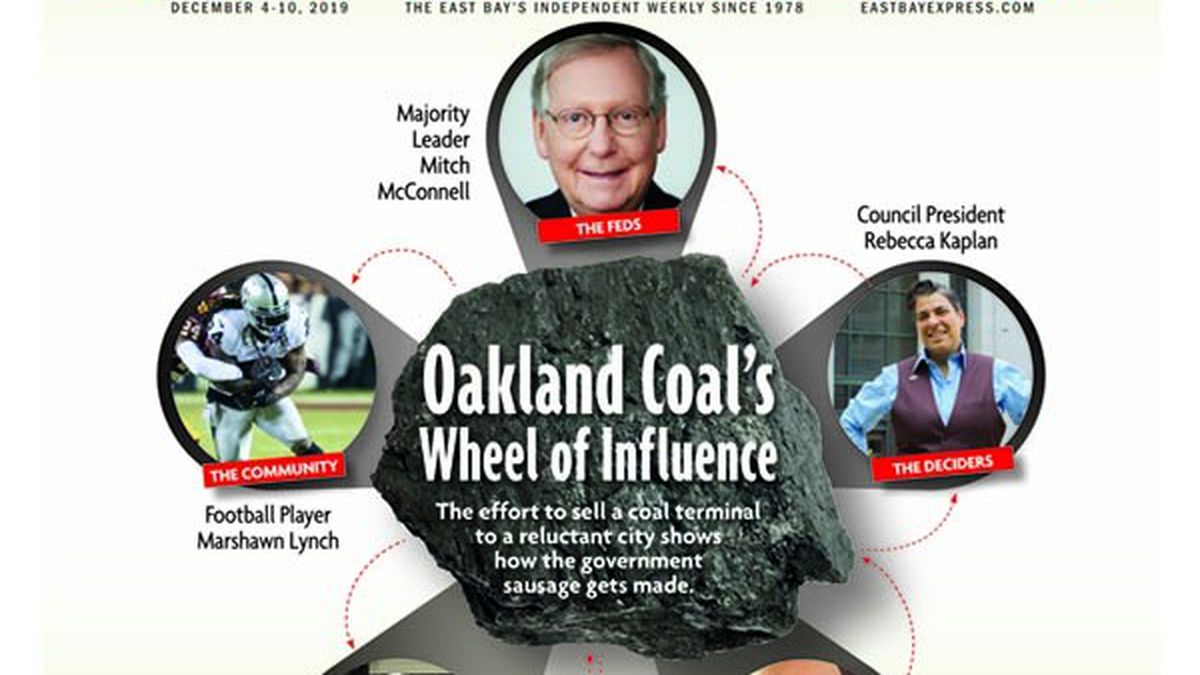 Their Time is Up

At the end of the day, it appears that the only Oakland persons with integrity on this coal issue are Margaret Gordon and Marshawn Lynch. McConnell, Bridges, Benjamin, Abrahms, and Tagami all seem more than willing to trade their integrity for money. This is the ugly truth of politics, whether it is local or national. People like the ones named above have influenced decision makers inside Oakland City Hall for at least the last 20 years. Their time is up and I am glad to see the new city council members continue to draw a line in the sand when it comes to this coal issue. The short- and long-term health and safety of citizens in West Oakland is way more important than the dirty money opportunity for this caste of characters.

At the end of the day, as Greta Thunburg will learn soon enough the hard way *sigh* — it is all about money, all of the time. Money buys everything, because most folks are fairly short sighted — it is the human condition. Everything has its price. Just does. I am no supporter of coal thru Oakland … and I hope this project gets revised into something less deleterious. But don’t kid yourself — most everything is for sale most all of the time. Be it in Oakland, or the world. Only the price tags change … with supply and demand. Wish it were different! But it’s not. 🙁

Phil Tagami is Not Backing Down, Feature, Feature, Dec. 11

Um … why would he back down, after he won? Thirteen million dollars in and he’s going to give up after a judge lambastes his adversary — you know, the one with all the governmental power? Right. And this thing was kissed by Brown and Quan back in the day? Government at its worst.

I am no fan of a coal terminal near where I live but, come on, the government blessed this thing when it looked like the economic world was ending … and five years later booed it after private interests took up the challenge without the benefit of government printing presses and taxing power.

The Phil Tagami and Richmond coal stories in your December 11 edition highlight the conflict between jobs and the environment. The problem is that the economy of this society is based on destruction of the natural world, specifically logging, mining, drilling, cattle grazing, and “development,” the latter being a dishonest euphemism for “destruction.”

Unions are on the wrong side of this issue and lost my support many years ago, even though I organized a union in the mid 1980s for the Berkeley recycling curbside pickup crew when I worked there. The environment, especially the natural environment, must always come first. Anything to the contrary is condoning mass killings of other species, sometimes to extinction or extirpation, and destruction of their habitats and sometimes entire ecosystems. It’s a no-brainier to support unions when it’s just the workers against the piggy bosses and owners, but it’s become far more complicated than that, and supporting the environment is much more important.

Phil Tagami singlehandedly brought more funds and resources to this city than many people. Just to mention a few I know about:

1. Oakland Bulk and Oversized Terminal project has been amassing funding and approvals, first and foremost a $242 million state grant. Hundreds of permits have been approved, extensive public meetings have been held, and its environmental impact statement has been examined by the city council and the port. Not to mention jobs.

2. Fox Theater renovation that revitalized whole Telegraph street. Fox is a reason why we have so many other bars and restaurants downtown.

4. Phil’s personal help and investments in a many food and beverage businesses and ventures in Oakland bars and restaurants.

5. Thousand of jobs and families that live with prosperity, thanks to all the above.

So, be serious and maybe ask yourself how much did you do for Oakland? How many jobs you create? How many other self-made business people you know did the same for Oakland?

When their teeth start falling out from a lack of collagen and bones become brittle and frail from a lack of protein — real truth about vegan and vegetarian diets.

Next ArticleWhat Will 2020 Mean for Cannabis?