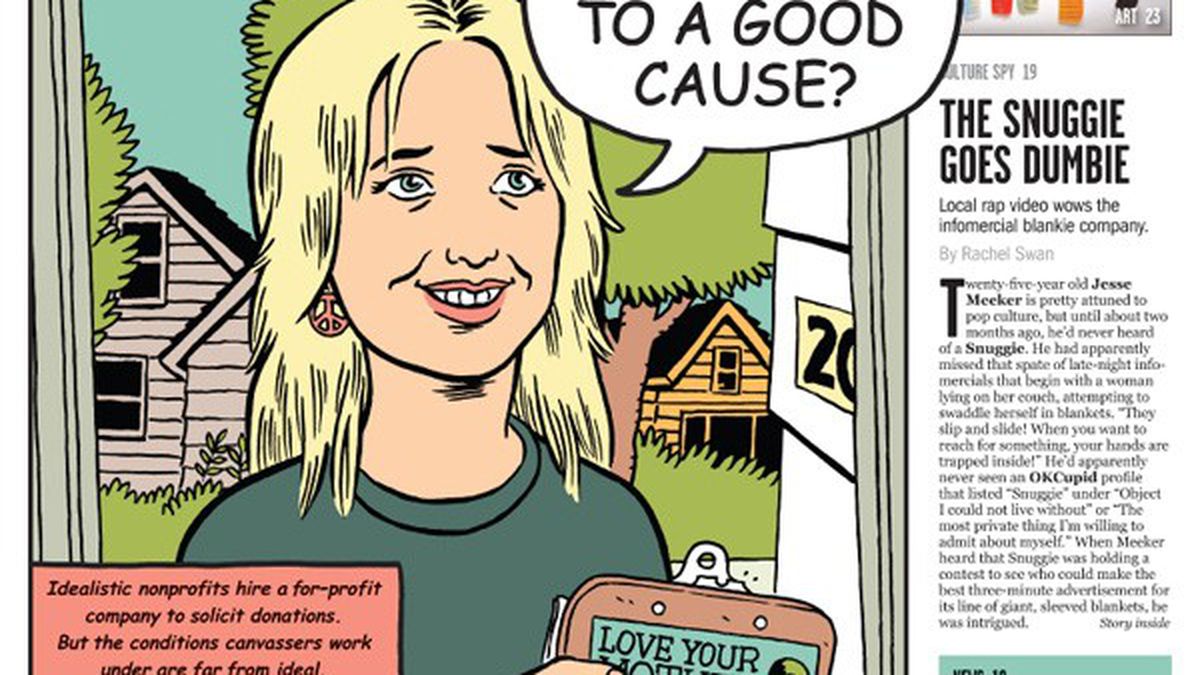 Elk Meat Is It

How can we get on that hunt? And does the meat taste good?

I go to these places, because instead of serving beers only good for getting you drunk (like, gag, Budweiser or Pabst), they serve beers of high quality, in the full range of types, that taste exceptional. Something for everyone, from Belgian brews to local microbrews and craft beers. Who says that only wine lovers can care about their drinks? Beer Revolution and The Trappist both have a wide, changing selection that lets you determine your taste in beers, and work to broaden and refine it. I put together an Oakland walking beer trip on Gowalla, including these Oakland finds. I’ll see you there!

“Are SmartMeters Dangerous Too?” Feature, 7/21

SmartMeters Are Jamming My Radio

All of my AM radio frequencies have been turned to static for weeks. It began when PG&E started installing “Smart Meters” in this neighborhood. I knew there was something going on when I would pull into my driveway and the closer I came to the garage door, the louder the static became on both AM and FM on my car radio. Today the PG&E man came back to install our meter since we refused when the private contractor was here; needed more info. He said, “You are picking up the signal emitted from one meter to another so they can work.” They work on the same idea as a wireless computer router, which picks up signals from each computer.

Not All Canvassers Are the Same

Your recent piece shined an important spotlight on the employment practices of a particular street canvassing operation. Mr. Green rightly called out problems with that organization. But not all canvasses fail to treat employees with the fairness and respect they deserve. As the article mentions, Peace Action West offers heath-care benefits to full-time and part-time staff. Even during this economic downturn, we have increased canvasser pay and avoided layoffs. We also offer generous vacation benefits, sabbatical pay, and a socially conscious IRA.

The article also mentions that canvassing is a challenging, high-energy job. I know it’s tough. I canvassed for a year and a half before advancing into other advocacy work. In fact, every one of our current senior managers cut their activist teeth as canvassers. Many of Peace Action West’s former organizers used what they learned to get jobs working for progressive members of Congress, to start their own nonprofits, and even run for office.

For a wider understanding of the importance of canvassing, look to the political and funding context. We count on letters and signatures we gather to get the attention of elected officials. We canvass because, as a grassroots group working on controversial issues, we have to. Peace issues do not generally attract foundation support. Forget government money. Without the generous hearts of the folks responding to the canvassers’ “pitch,” some progressive organizations would simply not exist. Is that what we want, given the political challenges we face from the right? As your article implies, we shouldn’t have to choose between treating workers fairly and building organizations that push for progressive values. We need to do both. To the readers who make space in their busy lives to make the world a better place by stopping to chat with a canvasser: Give yourselves a pat on the back!

Why I Don’t Give

I appreciate that these folks have their hearts in the right place, but I make it a point never to give money to them. How much overhead does it add to the already tight budget of these causes to use paid canvassers? Shouldn’t they be in the Antarctic Ocean saving Minke whales from Japanese fishermen? That’s activism; standing on the street and harassing passersby is just annoying. The confrontational sales pitch is off-putting, and the ones I’ve engaged with aren’t actually happy to accept a one-time donation; they want an monthly donation and a credit card. No thanks, I’ll donate on the Internet instead.

Poaching Is Bigger Than Us

Just a clarification. The $3/mo fee is a DIVERSION fee; it helps cover any number of the city’s many programs that divert discards from the landfill. This fee is not earmarked for recycling per se and just makes up part of the overall budget for Zero Waste and Clean Cities efforts in Berkeley.

On the poaching, you have to understand the relative implications of the new carts. Yes, other cities still have poaching, the carts do not eliminate poverty or the inherent incentive to collect valuable recyclables from private sources. But compared to the small open bins and bags, carts are a deterrent and we have already seen the reduction in illicit scavenging that other cities have experienced when they adopted carts.

Richmond, I’m just so happy for you and proud of you! Having been a Richmond resident for five years or so, I miss the strong upward trajectory in the ethics of your government you have engineered, along with your ever loyal guide and friend, Tom Butt. When I first moved there I was fooled by the pretty face and false promises of Ms. Lopez, as I hadn’t yet learned the ropes of Richmond politics and I am ashamed to admit I voted for Ms. Lopez the first time around. It took a few months of watching the city council meetings for my slow brain to see the pattern (obvious now in hindsight), that for Lopez, Viramontes, and Bates there is little consideration of what is best for Richmond citizens, but that everything revolved around their patrons and financiers. Only when there was no competing interest did they seem to do the right thing, and while it took a while for me to figure that out, it did eventually become clear.

Now Chevron throws a good $1 million into the fray to confuse you during this last election, and what do you do — you ignore them completely, or even use that abusive, antidemocratic spend as a reason on its own to reject the Chevron slate across the board! Wow! I used to hope just for a majority of good governance candidates in Richmond, who put the long-term interests of the community first, but now you’ve bounced out the bums on their bums across the board. Again, wow!! Your clarity of vision is beyond commendation. In saving yourselves, you save Richmond for you and your children, too.

I’ve left now for Oakland, as my fiance works in San Ramon and this was the best in-between place we could find, but given the utter lack of concern for ethics in government or good governance out this way, I can only stand in awe and appreciation. You have done what maybe one community in a hundred does in standing up to the moneyed, self-serving interests and seeing through the lies and corruption for the truth. Congratulations, I tip my hat to you, friends of Richmond! Well done, well done.

What About the Crust?

Reading the page of pizzeria reviews I noticed the concentration of interest in toppings with relatively little attention paid to crusts … not their dimensions, but ingredient quality. Here in the Bay Area where “organic/sustainable/slow/whole foods” have finally reached acceptance, refined white flour products curiously remain the norm for things like pasta and pizza. I’ve tasted wonderful pizza crusts made with varying amounts of whole grain flours, making them not only more nutritive but extremely nutty and tasty. I’ve tried to interest local commercial pizza makers in the idea, but the response has always been that customers wouldn’t support it. Could it really be true in this area? Would there be any way to get a community pulse on the question?

What is your preference: white or whole grain? Leave your response in the online comments to these letters.

Maybe She Was Sick

I’ve seen Gretchen Parlato perform a number of times over the years, and her performances have always been quite upbeat and sparkle with energy. So it did seem she was unusually reserved and lacked her typical bubbly energy on this particular evening. But after the concert I overheard her telling people, while signing CDs, that she was recovering from illness, which would explain much of the criticism in this review, which went so far as to suggest possible stage fright. It’s easy to see how this might be the interpretation, as it would require a similar hyper-focus to overcome either obstacle. In this case it seems more likely she was just putting in her best effort to perform and sing while feeling subpar.I didn’t feel the room acoustics helped matters. It’s a beautiful building and room, but I was continually distracted by the sound going in and out of control — the sound of the drums was too live, the upper range of the keyboard was almost silent during solos and even Gretchen’s normally delicate voice boomed and echoed in louder passages. For me, the out-of-control acoustics were even more distracting than my curiosity over her sounding possibly sick.

The November 10 Raising the Bar column “Mehserle Sentence Is an Insult to the Black Community” stated that Oscar Grant was shot while handcuffed. In fact, the exact state of his hands at the time of the shooting is apparently a matter under dispute.

In our November 10 correction of our November 3 film review “The Pure and Clear Films of Carl Theodor Dreyer,” we once again misspelled the filmmaker’s name. It’s probably good that he is long dead.

Send in the Clouds

After two years of recovery clouds are again darkening America’s horizon. We’re going to hear all the same claptrap that we heard from Republicans during the eight years of Bush.

Americans traded in the splendid ideals of President Obama for the worn-out spin of House Minority Leader John Boehner and Senate Minority Leader Mitch McConnell. The Wall Street financiers will be raking in billions again with Republicans ascending in power.

“Power to the People” is being sacrificed to the greed of corporations and special interests.

The stated GOP goal for the next two years is “no compromise” and to block all legislation proposed by the Obama administration, and probably, Republicans will go back to attacking Social Security and Medicare. Does this sound like democracy to you? Republicans will also try to dismantle all that Obama and Democrats accomplished in the last two years. What a waste!

Corrections for the Week of November 9