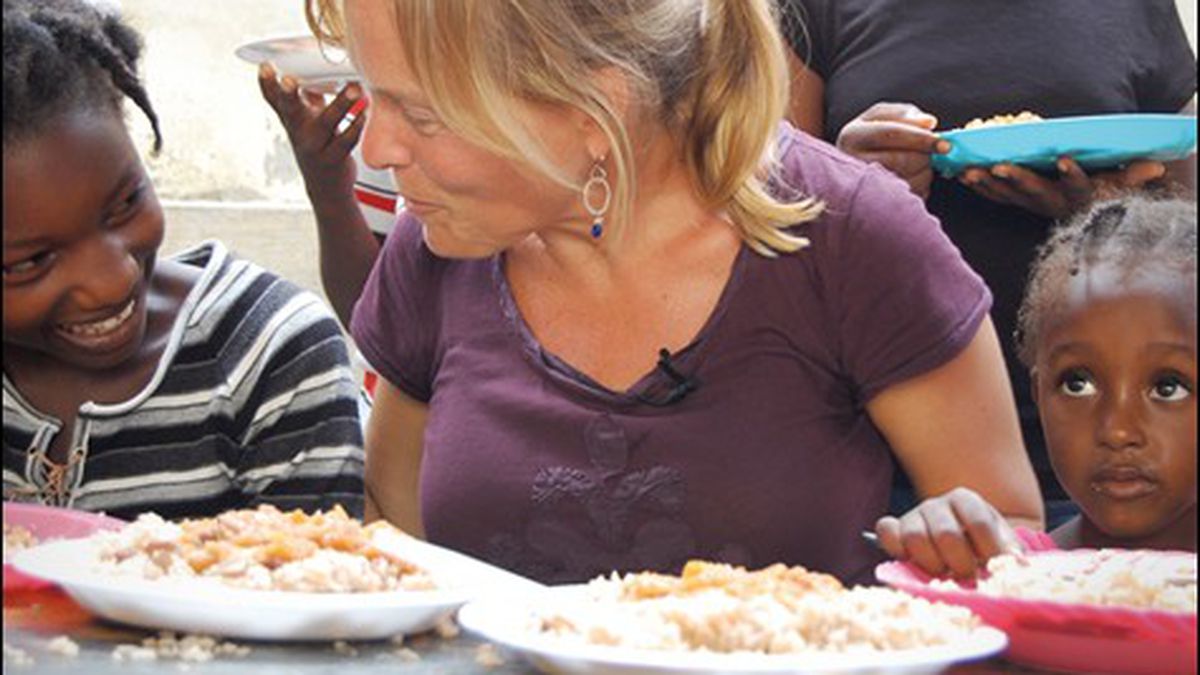 From Berkeley to Haiti

Local nonprofits provide food and funds without the overhead.

Watching about forty women singing, dancing, and laughing on a September afternoon, you’d be hard-pressed to know that most suffered terribly in Haiti’s devastating January earthquake, losing family, friends, homes, and the means to make a living. The celebration just outside Port au Prince honored thirty women for paying back six-month emergency microloans funded by the Berkeley-based Haiti Emergency Relief Fund (HERF) and rewarded them with bonuses: their first savings accounts, funded with the interest they paid on the loans.

Some 45 minutes away, in the St. Clare neighborhood, the Berkeley-based What If? Foundation feeds some 3,000 people, mostly children, five days a week. To get there, you pass dozens of earthquake survivor camps, with hundreds — sometimes thousands — of decaying tarps and tents crowded together. Bone-thin children play soccer with tin cans and garbage pickers sift through rubble looking for anything they might sell. In a modest concrete building that belongs to St. Clare’s Church, Sister Roselie Luxama and other cooks sit on low stools, talking, laughing, and slicing squash for the next day’s meal. Large pots of steaming rice and beans bubble atop commercial-size stoves in the adjacent kitchen.

“The best part of my job is seeing the faces of the children,” said Luxama, noting that it’s the only meal of the day for many of the kids. “They’re so excited when they have a chance to actually eat something.”

As Haiti struggles with a growing cholera epidemic that has struck some 10,000 people and killed more than 800, a look at two Berkeley-based nonprofit groups operating in Haiti shows how small organizations often can target aid much more efficiently than their larger counterparts. These groups build on local ties with Haiti that grew after now-exiled President Jean Bertrand Aristide visited Berkeley twice after the first coup against him in 1991. After Aristide was restored to power in 1995, local radio technicians from KPFA and Free Radio Berkeley helped build community radio stations in Haiti. Prominant Haitians spoke at public gatherings in Berkeley and Oakland. The Berkeley City Council issued a number of resolutions in support of democracy in Haiti.

Since the 2004 founding of the Haiti Emergency Relief Fund, it has helped support programs of the school known as the Society of Providence United for the Economic Development of Petion-Ville (SOPUDEP), including educating very poor children, adults, and child domestic servants. The women who received the fund’s microloans are part of a group called Women of SOPUDEP in Action, most of whom came to the school before the earthquake to learn to read and write.

Before the earthquake, many of these women supported their families as “ti-marchands” — literally, “little merchants” — vendors who bought goods in small quantities and sold them by the piece. Most lost their merchandise in the earthquake and had no reserves to re-start their businesses.

With small grants from the fund, thirty women each received the equivalent of $60. They paid back the loans over six months, with a hefty $12 interest, not knowing the interest would come back to them as bonuses. “Originally, the women thought we were just taking the interest for SOPUDEP, said Rea Dol, the school’s founder and director. “We wanted to save this as a surprise. As they repaid the funds, other women received loans.

The program is more than lending funds. Recipients are mentored by more experienced vendors, and workshops at SOPUDEP teach business skills.

Before distributing the small blue savings account booklets, Dol rallied the women: “Organize! That’s what women deserve. We can’t suffer forever. If we don’t organize ourselves, we’ll always be victims of humiliation. Do we want to live forever under a man’s control? That doesn’t make sense. Do we want to depend solely on money the man brings home? No, that doesn’t make sense. If we organize ourselves, we can avoid this.”

The grants are typical of the fund’s efforts, said Walter Riley, an Oakland civil rights attorney and the organization’s co-chair. “We know the people we work with,” he said. “Somebody in HERF, or somebody that partners with HERF, will know the individuals and organizations that we are working with and we also know their history as grassroots organizations. We know the capacity of the groups to get work done. The money we give folks gets used.”

Unlike large charities such as the Red Cross, the relief fund has no paid staff, no offices, and no overhead. Administration and fund oversight is provided without cost by Berkeley-based East Bay Sanctuary Covenant, whose executive director, Sister Maureen Duignan, co-chairs the fund’s board. In contrast, the American Red Cross raised $476 million for Haiti earthquake relief and spent “and is spending” $185.6 million — about 39 percent — according to Red Cross spokesperson Mat Morgan. In Port au Prince, the new-looking SUVs marked Red Cross, Save the Children, and World Vision are the visible signs of the big charities.

Haiti Emergency Relief Fund listens to those it funds, Riley said. It recently purchased mules for a community outside Port au Prince. “This is an entire community that depended on growing their products and getting them to market,” he said. A truck wouldn’t have been suitable — mules could navigate the paths to the market. “We know these people and that the mules were being used for collective purposes.”

Since the earthquake, the fund has funded mobile schools, clinics, and a mental health program through the Aristide Foundation, founded in 1996 by Aristide.

Meanwhile, in North Berkeley, Margaret Trost runs the What If? Foundation from her home. In her book, On That Day Everybody Ate, she recounted her first visit to Haiti while struggling to move beyond grief over the death of her young husband and how the late Father Gérard Jean Juste inspired her to believe in a positive future for Haiti and for herself.

One decade ago, What If? began feeding 500 children once a week, then expanded to serving 1,500 children five days a week, and now serves 3,000 meals five days a week. It also offers 1,000 kindergarten-through-university scholarships, runs a summer day camp, and provides jobs to 26 cooks, custodians, and summer staff. Funding serves double duty; the food is all purchased locally, Trost said. “The program is community-based, to support local entrepreneurs.”

What If? and other small nonprofits ran headlong into a logistical and bureaucratic nightmare after the earthquake. It had funds to purchase food in the days after the quake, and the ability to expand its program to serve newly hungry people. But commerce had come to a standstill; no food was available.

Food aid was being stockpiled at the airport near St. Clare’s. “People could see all the planes landing,” Trost said. They knew they contained food aid, but there were no signs that aid was being dispersed. “We tried so hard to find out how decisions were being made and where the relief went and how USAID or the World Food Program, World Vision, Catholic Charities, Red Cross were making decisions about distributing the food and water. It was a very complicated task, certainly, but I couldn’t believe how difficult it was to get on the map as an already-functioning food program. We’d been doing it for ten years at that point — Haitian-run, effective and safe, and right there.”

Unable to tap into international food aid in the days immediately following the earthquake, Lavarice Gaudin, who manages the What If? programs in Haiti, hooked up with the Zakat Foundation, a US-based Muslim charity, rented a truck, and started making sixteen-hour roundtrip food runs to the Dominican Republic. “Four miles away, the airport was stacked with aid that wasn’t distributed,” Trost said. “That was outrageous.”

In the aftermath of the earthquake’s chaotic first weeks, What If?’s program grew to 5,000 meals, five days a week. The small nonprofit didn’t have the funds to sustain that. Large charities had food; What If? tried again.

“We tried on this end with phone calls and the Internet and our connections and e-mail and all these things — we put ourselves on different lists,” Trost said. But that didn’t help. She called on Widner Pierre, a Haitian student she knew studying in New Orleans, who went to Port au Prince and, with several companions, tried to approach the large organizations.

“It took four days for Widner to figure out how to have the food program recognized as something that existed,” Trost said. “Then they were told to go to this tent and they’d go to the tent, but nobody’d be there. And then they’d say, ‘call that person,’ and they’d call that person and person would say, ‘I’m not in charge.'” Eventually, a UN representative directed them to a food cluster meeting, where large charities discuss food distribution. When they got to the meeting, a security guard told them they weren’t on the list and that he’d never heard of the UN representative who sent them there. “These are Haitians, young men representing the food program,” Trost said. “They weren’t let through the gate.”

Trost gave up on international aid, worked at fund-raising, and limited meals to 3,000.

As 500 summer camp children enjoyed a meal after a morning of dancing, singing, computers, calligraphy, cooking, embroidering, art, soccer, and more, Gaudin put the group’s work in perspective. “Some of their fathers and mothers were killed during the earthquake,” he said. “They’re happy here, playing with each other, climbing trees, and running around in the bushes.”

Nonprofit groups that already know the communities they serve are effective, said Gaudin, who earned an MBA in the United States. “When I look at how much, as a small organization, What If? does in Haiti, compared to those who have a million … dollars in their hands — if What If? had that money, you would see most of the kids in school in Haiti. You would see more food provided to people. What If? operates here, working with people in the community who know the problems, who can identify people in need — everybody’s in need — but we know who needs to be taken care of first.”