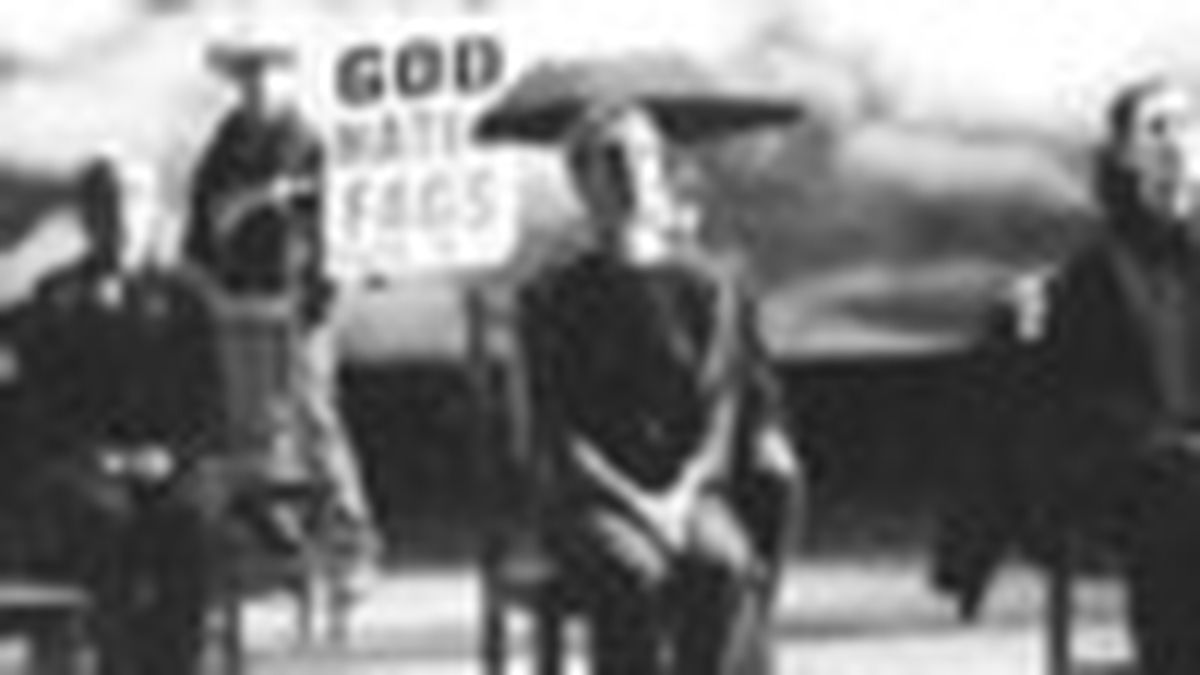 Lessons of a Lonesome Death

This is the side of Laramie that the media didn't catch.

A few years ago when the news first broke that a gay college student named Matthew Shepard had been brutally beaten, robbed, and left for dead near Laramie, Wyoming, I’m sure I’m not the only Californian who shuddered and gave silent thanks that I lived someplace “tolerant.” Nor was I the only one who puffed up with rage at the people of Wyoming for “letting this happen” while thinking, at the same time, “Well, what do you expect of a place like that?” I’m Detroit-bred, after all, and I know the score. San Francisco, Chicago, New York, Los Angeles, Boston: those are safe places for gay folks. Most everywhere else, though–hotbeds of shotgun-toting, scripture-spouting, homophobic rednecks. Of course, that kind of thinking is not exactly anything to be proud of.

Fortunately Moisés Kaufman (the Venezuelan-born director of Gross Indecency: The Three Trials of Oscar Wilde) and his collaborators in the Tectonic Theater Project saw that there was a larger, more truthful story in all of this, and went with openness and humility to the people of Laramie to get it. Now their long-awaited documentary theater work The Laramie Project has just opened on the Berkeley Rep’s Roda stage. Even with certain inconsistencies, Laramie is an extraordinary, must-see production, challenging its audiences to reconsider cherished assumptions while expressing theater’s singular power to reveal the true nature of both individuals and communities.

An unsparing chronicle of the events leading up to and following Shepard’s death, Laramie somehow manages to be both humane and heartbreaking, a testament to the life of one young man and what he stood for as well as the expression of a community’s shock, grief, and painful self-exploration. An honest collaboration between Kaufman, the Tectonic Theater Project, and the people of Laramie, this play (which, yes, has been performed in Laramie, where viewers said the show captured their experience correctly) has a surprising amount of tenderness and humor. At the same time, it’s also a searing indictment of the kind of mindless provincialism that can take root anywhere, big city or small town, as it simultaneously explores identity, community, responsibility, justice, and class–Matthew Shepard was well-off, well-dressed, well-mannered; his killers were men whose own friends considered them dirty, meth-addled opportunists given to visiting other towns to rip people off. Built up from months of interviews, found text, and actors’ journals, it seeks to wring some sense from a brutally senseless event that left one man dead and two in prison for the rest of their lives–and it does so, all without ever once directly representing Matthew himself.

We never see him, but we see what he was to the people who knew him: shy, sweet, loyal, newly self-confident as he realized his career path. And we see how his death has impacted Laramie. We also begin to see the city as its citizens do: a friendly place where people have strong opinions, look out for their neighbors, and fear God while cherishing those wide-open spaces so handy for self-reflection. This is the side of Laramie that the media didn’t catch: the thoughtful, grieving side, the face of a community that feels it has failed three of its own. Shepard’s lifestyle might not have been universally approved by his neighbors, but his death rattled them badly: “This is not that kind of place,” they tell us in this production, even as they grapple with the knowledge that two of their children have really stepped off the path. “We keep saying that we don’t grow children like that here, but I think it’s pretty clear: we do grow children like that here.”

It’s telling that the Rev. Fred Phelps, who got so much ink for protesting at Shepard’s funeral, comes off as more of an anomaly than anything else. Once again, we heard about him in the aftermath of the crime, but we didn’t hear about Shepard’s friend Romaine Patterson, who surrounded Phelps and his “God Hates Fags” sign with people dressed as angels, their wings so big that, when raised, they blocked Phelps from sight.

And here is where Laramie today puts many communities to shame –because the Laramites took to heart what happened; they haven’t closed themselves off and they’re doing the hard work. As the Tectonic show reveals, they have remarkable courage: in many cases these are straight folks deeply uncomfortable with homosexuality, yet they’re willing to engage in dialogue. We see gay citizens becoming more activist, and Matthew’s friends and family discovering that they can transform their tragedy into a tool for learning and growth: “Every door I approach,” says Romaine Patterson, “Matthew smiles and opens for me.”

Meanwhile, here in the allegedly enlightened Bay Area, parents in San Ramon are lining up to insist that teachers not talk to students about homosexuality. Some of the parents think that if teachers discuss it, then the kids will think homosexuality is okay, and they’ll become queer themselves–as if it ever happens that way. But the point is, Laramie is probably one of the safest places to be gay right now, because it has become so sensitized. As a member of the cast says, we have a lot to learn from Laramie.

Besides its spare format, Laramie is unusual in that the actors portray real, living people: themselves, and sometimes each other. Instead of reading a text and then developing characters from within themselves and their perceptions of who such characters might be, they generated the text with the townspeople, noting every “um,” pause, and vocal quirk. The writers estimate that 95 percent of the script comes from taped interviews, with a very few minor changes here and there for clarity. Which creates a tricky situation. The presentation gets a little “stagey” in places, especially in the middle act, and some audience members seemed to feel that the actors were getting more emotional than was necessary. “Just read it straight,” the guy next to me suggested. “It’s very powerful as it’s written.”

What I wonder is this: are the actors really replicating their interviewees’ emotional reactions, or taking a little dramatic license to liven things up? The video design is likewise a mixed bag: streaky, slo-mo highway footage heightens the dreamy, soporific feeling (like being trapped in a slow-moving, inexorable river) and effectively suggests what Matthew must have perceived while wedged into the cab of the black pickup between soon-to-be murderers McKinney and Henderson. But the idea of recreating TV broadcasts is gimmicky, especially as several monitors descend to fill the back wall. Having the actors play television reporters, which I guess is necessary (although the real footage could have been used effectively) is distracting, as television reporters themselves often appear to be feigning sincerity.

Besides the nameless newspeople, the play is full of memorable characters: Doc, the outspoken limo driver (“Never fuck with a Wyoming queer,” he says proudly); a Catholic priest who insists that the actors must “get the words right” or they will poison Laramie; a fast-talking bartender who insists that if he’d only been paying more attention he could have saved Matthew.

The actors conjure up their different characters by changing a jacket or putting on a hairnet, often shifting between roles so quickly that the switch is nearly seamless. There’s something very exciting about knowing that the actors themselves actually talked to the people they’re playing. This play would be very different performed by a different cast.

Unlike in most plays, we see very few relationships acted out here, as the people of Laramie speak directly to the actors interviewing them. One notable exception is the interplay between social worker Marge Murray and her daughter, police officer Reggie Fluty. Mercedes Herrero as the latter has one of the most delicate, brutal moments in the play when she recounts finding Matthew (Fluty was the first officer on the scene), and she handles it with a welcome minimum of histrionics. Her description of Matthew’s condition (“there was a great quantity of dried blood … everywhere [on his face] except where he had been crying”) cuts quietly and directly to the crux of this story, the image burned into the American consciousness of a young man–a boy, really–tied to a fence in the cold and left to die, slowly and alone, because he was gay.

The audience’s horror grows as Fluty matter-of-factly describes how when her cheap latex gloves broke, she kept working because she had a responsibility to do what she could. Matthew turned out to be carrying HIV, and Fluty discusses her emergency AZT treatment and her family’s reaction. “I’m not angry at Matthew,” her mother hastens to assure us. “Nobody is angry at Matthew…. But I just hope she doesn’t go before me.” “It’s a parent thing,” Fluty sighs, in loving exasperation.

The real message is that people’s lives were affected in unexpected and often scary ways. How they have chosen to deal with those changes, internal and external, and the growth they have undergone, has led me to believe that Matthew Shepard–who, ironically, had decided he wanted to get involved in politics so that he could work on human-rights issues –might have accomplished in death what he hoped to in life. It was a terrible sacrifice to make, but The Laramie Project suggests that Matthew Shepard did not make it in vain.