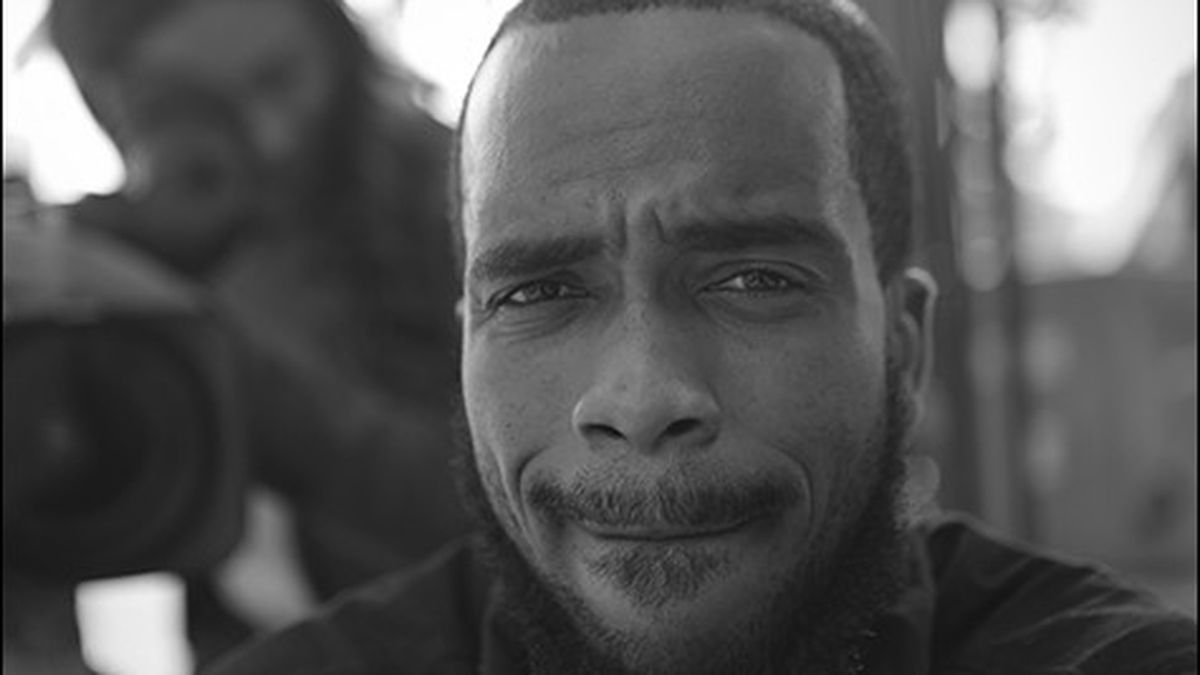 In one series of photos, an elderly man sits by Lake Merritt, his hardened face lit by the amber glow of sunset. He stares off into the distance, his resigned, tear-filled eyes glimmering. The text accompanying the photos says he has lost two nieces to gun violence in the last two years. And there’s a quote from him: “Nothing is going to make [violence] stop. All you can do is believe in God a little more.”

In another photo, Woody Carter, an author and theologian with a closely trimmed salt-and-pepper beard, reclines in a chair in a sun-filled coffee shop. Below the photo, a quote attributed to him states, “We’re all instruments out of tune. If you were to tune a violin, you’d have to use a tool to move those wooden pegs on the side of the object. Meditation is the process of bringing you in tune with yourself.”

These striking vignettes of Oakland life can be found on OG Told Me, a Tumblr page that uses photos, text, and video to document the insights of older black men. Pendarvis Harshaw, the 26-year-old freelance journalist who created the project in 2011, asks each interviewee a variation of the same question: “If you had the ear of the youth, what would you tell them?”

According to Harshaw, the concept for OG Told Me arose organically. “It came from my experience as a young person growing up in Oakland and seeing older guys — some I admired, some I despised — who came around me and gave me little tidbits of wisdom or said clever things, and I’d take notes,” he said.

Originally, Harshaw wrote raps inspired by the elders’ thought-provoking statements. However, he decided to share their philosophies on a more inclusive platform after teaching an African-American Male Achievement class at Oakland Technical High School and noticing that his pupils were often glued to their smartphones, scrolling through social media sites like Tumblr. “I thought, maybe I’ll put it on Tumblr and make it accessible to these young guys at Oakland Tech,” Harshaw said. “And it worked. They paid attention to it.”

The subjects of OG Told Me fit no formula. Interviewees have included a Senegalese carpenter donning paint-spattered clothes, an illiterate man who urges young people to “stay in school,” an Oakland couple who met in an Arkansas church circa 1934, and even Tommie Smith, the former track star who iconically raised a Black Power fist atop the medal podium at the 1968 Mexico City Olympic Games. Collectively, their experiences paint a colorful portrait of black manhood.

According to Harshaw, an OG is more than an “Original Gangster” (as the term is traditionally defined). An OG can also mean an “Oakland Griot” or an “Older Gentlemen.” Regardless of how OG is interpreted, “It is definitely a respected elder in the community,” said Harshaw.

He hopes the vignettes will prompt young people to respect elders, and vice versa. Harshaw contends that all generations are intrinsically bound together by a shared sense of purpose. “The sense of intergenerational responsibility, that’s something that’s innate within us,” he said. “I speak specifically from my experience as a black man. But I think it’s innate within us as human beings. It’s just to say, ‘I’ve walked this far down the path. Let me tell the next generation what I’ve learned.'”

Harshaw said he sees this responsibility “all the time.” “Especially with young black men who don’t have their fathers in the house. I grew up with a group of eight dudes in East Oakland. None of us had our fathers. We would all go out and get little bits of wisdom,” he added, referring to advice culled from uncles, bosses, and neighbors. Harshaw characterizes masculinity as a quilt, wherein small fragments of knowledge are stitched together to create a larger whole. “That’s how we learned what manhood was, quilting everything together. But we wouldn’t have gotten those tidbits of wisdom if those older guys hadn’t acted on that innate sense of responsibility.”

Harshaw insists that everyone — from the most well respected community leaders to the marginalized “fools” of society — has an important story to tell. “The supposed fool has the most to teach,” he said. “There’s a lot to learn from people who have bumped their heads.”

One voice featured on OG Told Me is that of Watani Stiner, a San Quentin prisoner who was convicted for his involvement in the murders of Black Panthers Bunchy Carter and John Huggins in a shootout at UCLA in 1969. Stiner, who maintains his innocence, escaped from San Quentin in 1974, eventually relocating to the South American country Suriname, where he got married and fathered six children. After twenty years of freedom, he turned himself in to the American embassy for extradition, on the condition that his Surinamese family could immigrate to the United States.

Stiner, an avid writer and journalist for The San Quentin News (one of the country’s few inmate-produced publications), became inspired to write an article about cross-generational relations after Harshaw interviewed him. “I want to let young people know that my story is part of their story, and all of our stories have a meaning and a message,” Stiner wrote in his article. “Each story is part of the human experience. For even a sad and tragic story has its lessons. We must hear those stories and connect with them in the process of moving toward a better self, society, and world.”

Harshaw, a recent graduate of the UC Berkeley Graduate School of Journalism, plans to release a book about his transition from boyhood to manhood and the knowledge he gleaned from elders along the way. One of the ten included essays details his experience travelling to an Alabama prison to speak face-to-face with his incarcerated father for the first time in nearly twenty years. He said his father told him, “Prison only exists in the mind.”

While Harshaw has interviewed approximately seventy men so far, the guidance of community activist Arnold Perkins lingers in his mind. Perkins explained that a human being, like a chick pecking its way out of an egg, survives by persistence. “I really like that concept — the wax and wane of the world,” Harshaw said. “Sometimes things are wide open. Sometimes things are closed.”

It was a dark and stormy month…