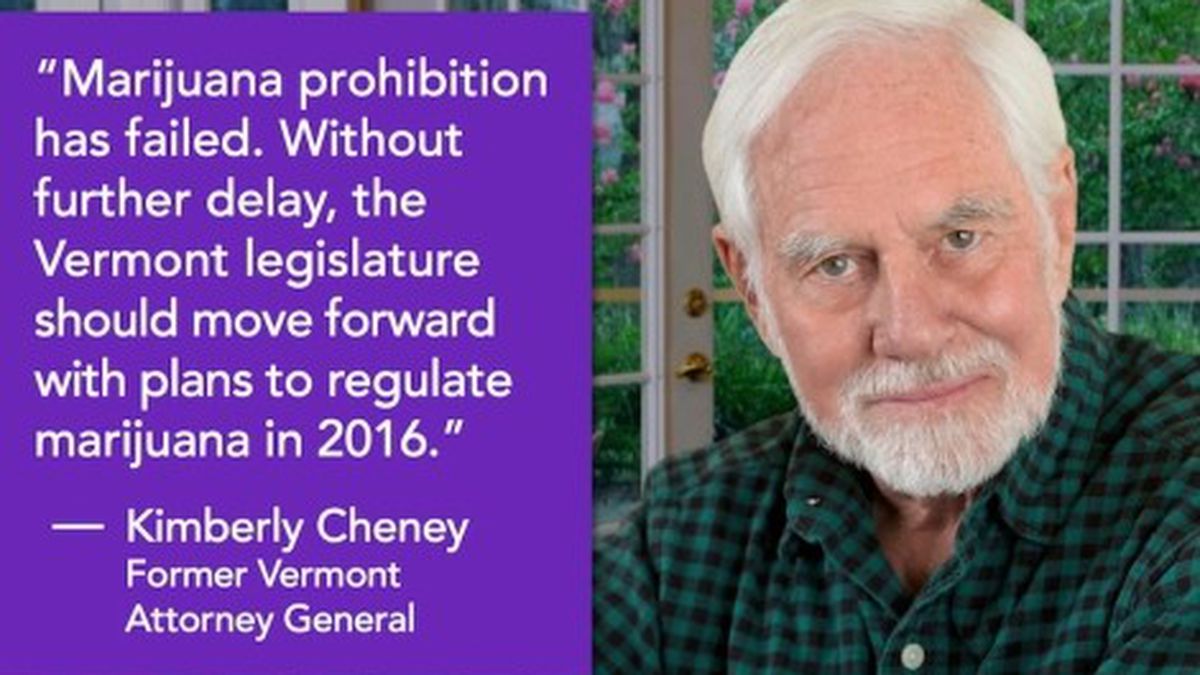 The Vermont Coalition to Regulate Marijuana held a news conference with Cheney at the statehouse to support Vermont Governor Peter Shumlin, who last week called for “thoughtfully and carefully eliminat[ing] the era of prohibition that is currently failing us so miserably.”

Cheney was attorney general in the Seventies and is now a member of Law Enforcement Against Prohibition.

“I am committed to bringing awareness to the failures of marijuana prohibition and working toward a safer Vermont,” Cheney said. “We can’t expect a different result by doing the same failed action over again. The only hope lies in a fundamentally different approach; without further delay, the Vermont Legislature should move forward with plans to regulate marijuana in 2016.”


Last week, Shumlin said Vermont “[has] the capacity to take this next step and get marijuana legalization done right” in 2016.

[jump] Over in Massachusetts this week:

The Campaign to Regulate Marijuana Like Alcohol Chairperson Dick Evans will join state Representative David Rogers on Wednesday to testify in support of Rogers’ new bill to end prohibition in Massachusetts.

Rogers and Evans held a press conference just prior to the Massachusetts Joint Committee on the Judiciary’s hearing on H.1561. Activists are working on both an initiative and a bill in 2016.

“Whether it happens in the legislature or at the ballot box, the result will be the same. Our communities will be safer because marijuana will be produced and sold by licensed businesses instead of criminals in the underground market. Our citizens will be safer because law enforcement will be able to spend more time addressing serious crimes instead of enforcing failed prohibition laws. And adults will no longer be punished simply for using a substance that is significantly less harmful than alcohol,” Evans stated.


Count Maine’s governor out, though. This week, Governor Paul LePage is being called an unreconstructed racist for blaming Maine’s opioid overdose crisis on Blacks.

LePage was asked at a town hall Wednesday how he planned to combat drug abuse, and said he was increasing penalties for out-of-state traffickers like —

“… guys with the name D-Money, Smoothie, Shifty – these types of guys – they come from Connecticut and New York, they come up here, they sell their heroin, they go back home.

Incidentally, half the time they impregnate a young white girl before they leave, which is a real sad thing because then we have another issue we have to deal with down the road.”

“LePage’s racist rants sadly distract from efforts to address one of our nation’s most pressing problems,” stated Hillary for America’s Marlon Marshall.

The CDC reports that Maine is a national leader in overprescribing opioids, and overprescription is the main driver of America’s opioid addiction and overdose epidemic — which is the nation’s leading drug issue, according to the DEA.

The executive director of the American Civil Liberties Union of Maine, Alison Beyea, reportedly responded that LePage’s remarks were “race-based fear mongering, reminiscent of shameful times in our nation’s past.”

“The governor is not making comments about race. Race is irrelevant,” LePage’s aides reportedly said.

Sharda Sekaran, the managing director of communications for the Drug Policy Alliance, highlighted the history of scapegoating minorities to enact selective drug prohibition.

“The drug war has traditionally been the best buddy of racism, which LePage’s offensive comments vividly reflect,” Sekaran writes.

“LePage is actually taking a page directly out of the drug war history book. He barely edited it:
— The first anti-drug law in our country was passed in 1875 in San Francisco. It was directed at Chinese railroad workers and was prompted by the belief that Chinese men were luring white women to have sex in opium dens.”
— Cocaine regulations were a reaction to racist fears about use among African Americans in the early 1900s. A 1914 New York Times article proclaimed: “Negro Cocaine ‘Fiends’ Are a New Southern Menace: Murder and Insanity Increasing Among Lower Class Blacks Because They Have Taken to ‘Sniffing.'”
— Marijuana is known by a Spanish name in the U.S. instead of cannabis because it was stereotypically connected to Mexicans on the southwest border towns. An advocate for marijuana prohibition wrote in the New York Times in 1935: “Marijuana, perhaps now the most insidious of our narcotics, is a direct by-product of unrestricted Mexican immigration. … Mexican peddlers have been caught distributing sample marijuana cigarets to school children.”

Lastly, New York‘s medical marijuana program is up and running this month. It has 71 people in it, leading VICE.com to explain ‘How New York Totally Screwed Up Legalizing Medical Marijuana‘.