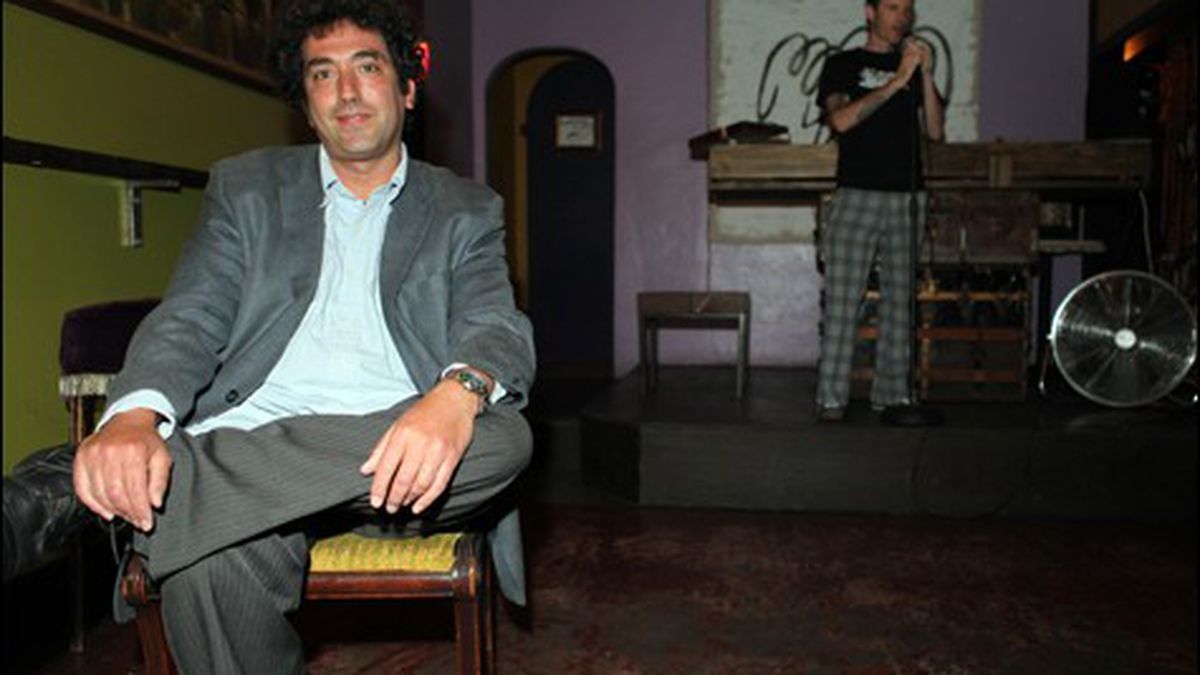 Laughs Come Cheap at the Layover

Chris Remmers had gotten off to a bad start. Either that or the crowd at Layover Music Bar & Lounge just wasn’t feeling him. Narrow and pale, with his hair parted straight down the middle, he looked like a kid standing nervously at the front of the classroom. Remmers shifted his weight on stage and crossed his right leg over his left. He ground a fist into the back of his neck. “I’ve got a friend who’s bald,” he began telling the audience. “He says my hair reminds him of his hair ten years ago. I don’t know whether that means he looked like me ten years ago, or whether that means my haircut looks ten years old.”

Silence. Remmers scanned the stage apprehensively. He decided to try a dick joke.

“So I went in the shower the other day, and I was like, ‘Oh, look who’s getting his dick wet.”

The audience guffawed. Remmers snickered. “Oh, it’s gonna be one of those nights, huh? That’s gonna get all the laughs.”

Remmers is a regular at the Layover Comedy Night, which launched in January and already has garnered a sizable following. Host Mike Spiegelman has been running rooms since the Nineties, beginning with a sketch comedy night at the Marsh Theater in San Francisco. He met Layover owner Zack Turner at an open mic about twelve years ago, and the two reconnected over Facebook earlier this year. Spiegelman said they clicked. He’s a fan of the Layover because of its swank décor and its carefully conceived entertainment lineup (which includes literature events, DJs, and the occasional live band), and Turner was gung-ho about doing a comedy night. The two set up a trial run in December, then went straight to a weekly format. Spiegelman now books five or six comics to perform every Tuesday, for no cover. Within weeks of its inception, his show had become part of a nascent comedy renaissance in Oakland.

While most of the scene’s tangible weight still lies in San Francisco, comedy has gradually been picking up steam on this side of the bay. In April 2009, Joe Gleckler and Samson Koletkar launched a weekly series called Comedy Off Broadway, originally at the Washington Inn and later at Miss Pearl’s Jam House in Jack London Square. One of the few paid rooms in Oakland, it now runs every Thursday and Friday, with four featured comics each week, plus the two hosts. Gleckler and Koletkar pay their headliner $25, and give all their artists free food from the restaurant. They charge $10 a head at the door. Attendance has been good, Gleckler said.

“Here’s the crazy thing,” he added. “Of course San Francisco has comedy clubs, but there’s a big club in Sunnyvale called Rooster T. Feathers, and freaking Pleasanton has Tommy T’s.” He paused a beat. “I mean, Pleasanton? Oakland had nothing until we started.”

At present, the East Bay has a smattering of open mics, ranging from Michael Booker‘s well-established monthly at the Englander Pub in San Leandro, to smaller events at Woody’s Cafe and McNally’s Irish Pub. Dorsey’s Locker used to be a big training ground in the 1990s, and rumors are it might start up again. The New Parish books A-list comedians on a regular basis. Spiegelman is steadily gaining mileage at the Layover, and says he’ll book his first paid show in August. Right now, his principal goal is to retain a steady crowd. Like Kasher, he envisions himself as part-entertainer, part-enabler, part-pedagogue. To keep the business going, he has to educate Oakland audiences about comedy.

So far, he’s been pleased. “It’s a very good crowd at the Layover,” Spiegelman said in a recent interview. “They’re savvy. If they don’t laugh, it’s not because they’re not listening. It’s because they don’t think it’s a good joke.”

After last Tuesday’s performance, Remmers might beg to differ. He went third in a lineup of eight comics that started with Gleckler and culminated with Phil Johnson, who got the first real guffaw of the evening when he compared himself to a gay stoplight. (According to Gleckler, Johnson wears the same shiny red shirt to every gig.) Otherwise, the crowd favored dick jokes, and wet dick jokes in particular. Harmon Leon got jeered for kicking his set off with a reference to “fingerbanging,” which became a running gag. “Fingerbanging!” shouted an enthusiastic girl in the back of the bar. Leon groaned. “You people are gonna make me fucking work, aren’t you?” he challenged the audience. Leon grew increasingly rankled when nobody reacted. “I’m going to have you fucking people replaced,” he scoffed. “I’m actually an eccentric millionaire. I’m going to buy this fucking bar and have all of you replaced. Here’s the ironic twist — they’ll be wearing all of your clothes.”

Leon and Remmers weren’t the only ones to reverse-heckle their audience that night. Vahé Hova explained all of his puns, to make sure we got them. Colin Mahan thanked everyone for their feeble applause. Standing outside the bar afterward, Leon and Remmers groused about the audience’s lack of sophistication, and said they usually expect more from the Layover. Spiegelman remained sanguine. He said he saw a lot of regulars in the house, and he was pleased to glimpse some new faces, too. It’s rare for an Oakland comedy showcase to pack a medium-size bar on a Tuesday night, and the Layover fills up consistently.

Spiegelman and Gleckler both live in San Francisco, but prefer doing comedy in Oakland. The laws of supply and demand work in their favor, as do the venues. With its divan-seating, chandeliers, and adjacent art gallery, the Layover is a pretty interesting place to run a comedy night, and Spiegelman has the whole thing down to a science. He starts promptly at 8:30 p.m., gives each comic ten to fifteen minutes, and ends at 9:55 p.m. to make way for a live band. Throughout the sets Spiegelman paces the stage, glancing anxiously at his cell phone, and holding up fingers to indicate the amount of time left.

Some comics sass him. “Thank you, Richard Nixon,” Leon said, after Spiegelman flashed him a two-fingered peace sign. Remmers was a little more ingratiating. “Oh good,” he said, when the warning came. For the first time that night, he grinned at the audience. The audience grinned back.