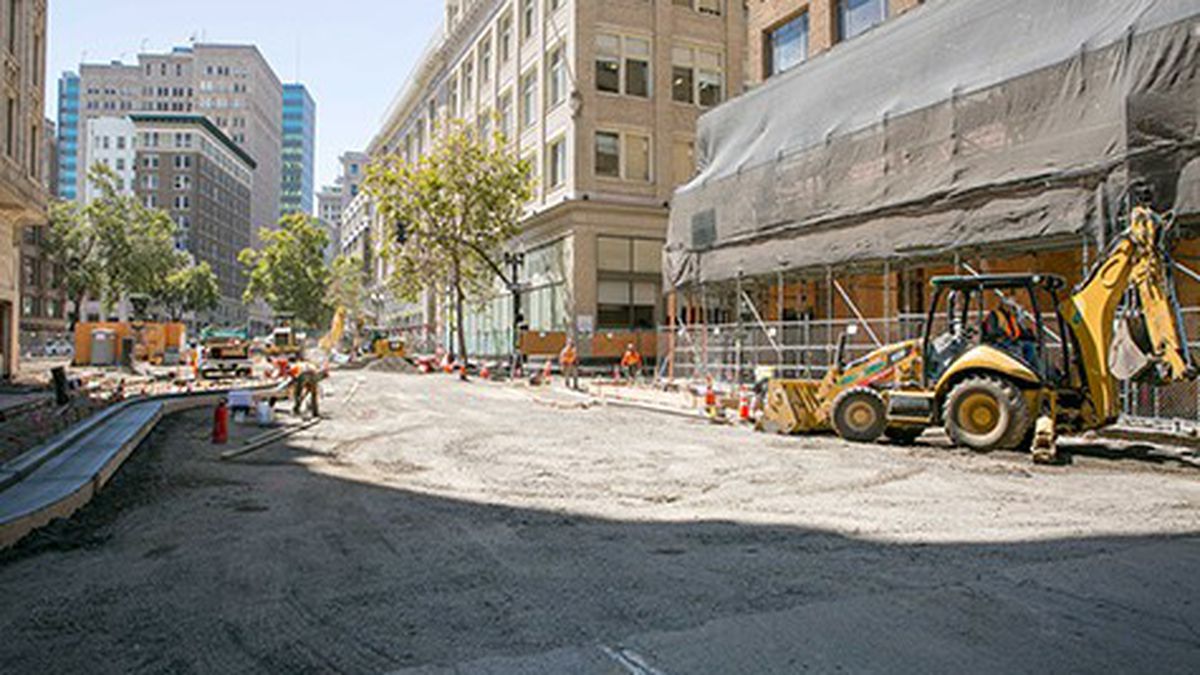 With the project expected to last through the end of this winter, some independent retailers say the city has not done enough to draw foot traffic to the central intersection.

While downtown Oakland is home to a variety of community-minded small businesses, a central section of the district is in danger of no longer being the eclectic retail hub that local entrepreneurs have cultivated over the past several years.

Beginning last May, the City of Oakland commenced its Latham Square improvement project, a major overhaul of the small plaza at the intersection at 14th Street and Broadway. The redesign of this key junction promises to enhance the area’s walkability and improve traffic flow. However, the prolonged construction — which is slated to last through the winter, weather permitting — has left Telegraph Avenue and parts of Broadway covered in obtrusive scaffolding that extends from 14th Street to 17th Street.

According to several business owners, the elaborate construction and partial street closure discourage foot traffic and led to significant drops in sales — so much so that some of them are unsure whether their stores will survive as the project stretches into the holiday season. And while downtown retailers seem to agree that the expanded Latham Square plaza will be an improvement to the intersection once it is completed, many say that the city has not done enough to encourage people to visit the area in spite of the cumbersome barricades and closed throughways.

“They could be using their resources to say, ‘These stores are open, come shop here,’ waive parking fees, and all sorts of creative ways they could try to mitigate some of the impact,” said Jeff Perlstein, the owner of SoleSpace (1714 Telegraph Ave.), a shoe store that doubles as an activist hub. Instead, Perlstein added, the signage rerouting traffic around the construction site has warded off pedestrians and cyclists.

SoleSpace has been in business for three years and, according to Perlstein, has experienced a 42 percent drop in sales since construction began. Because of the lack of foot traffic during the day, he has cut the store’s hours of operation in half and launched an IndieGoGo campaign to raise money for its community events. SoleSpace recently opened a second location on Grand Avenue to generate additional funds for its cultural programming, but Perlstein said that space is not large or centrally located enough to use as a venue.

Alyah Baker, the co-owner of Show and Tell Concept Shop (1427 Broadway) said that the closure of a crosswalk on Broadway adjacent to her boutique has cut off a vital stream of potential customers. “It takes a lot more work and energy to generate the same amount of sales [as before]; you have to get every single person who walks through the door to make a purchase,” she said. “People have to risk their lives to jaywalk across the street to check out the store.”

The City of Oakland maintains that it has made ample efforts to ensure that surrounding businesses and residents were well prepared for the Latham Square project. Oakland Public Works held several community meetings throughout 2013 and 2014 about Latham Square, which many local business owners attended. In addition, the department mailed and hand-delivered letters alerting businesses and residents that construction would commence around two weeks ahead of time.

In an interview, Oakland Public Works spokesperson Kristine Shaff and project manager Nick Cartagena insisted that businesses were made fully aware of the project’s scope and should have had plenty of time to prepare. “People knew it was coming; people knew what the intention and the final product would be,” said Shaff. “So yes, there is a temporary inconvenience because of the construction with the intention that it will be much improved and much more vital.”

Shaff and Cartagena explained that the construction project is so expansive because, in addition to the street-level improvements, there are essential infrastructure updates that must be made to the area. Underground utilities linked to commercial and residential properties — including a 121-year-old water main and two 110-year-old telecommunication vaults — needed replacement. The Latham Square project provided the city with the opportunity to take care of these issues simultaneously.

“We have the improvements that will be a lovely plaza and a lovely streetscape, but the infrastructure underneath is crucial to the functioning of the businesses [in the area],” Shaff elaborated. “If there’s no water for those businesses, they’ll be out of commission a lot longer.”

Still, many business owners contend that the city has done too little to alert the public that stores and restaurants around Latham Square are still open. Though there are several placards surrounding the construction area that say “Businesses Open During Construction,” they are easy to overlook amid the many barricades and traffic signs around the site. Ultimately, the onus has fallen on business owners to devise strategies to attract customers as the project progresses. Awaken Café, for instance, has put up large banners alerting customers that it’s still open. Shaff said that though Oakland Public Works is willing to use its resources to help business owners affix such banners to their storefronts, it’s up to businesses to create their own signage.

Ari Takata-Vasquez, the owner of the clothing boutique Viscera (1542 Broadway), said she looks forward to Latham Square’s completion, but believes that the city could be doing more to communicate the project’s benefits to the public. Signs with illustrations of what the plaza will look like once its completed, she said, would help boost morale and ease some of the tension between business owners and the city. “People should be excited for this project, but no one knows what it’s even going to look like,” she said.

Despite the obstacles, Takata-Vasquez and other neighboring business owners are coming up with ways to revitalize the area despite the lack of government support. The city recently approved a plan by Takata-Vasquez, who has a background in city planning, to build a parklet (a miniature park the size of a parking space) outside her shop. Meanwhile, Baker has been running sales and focusing more of her energy on hosting special events to generate interest.

Muhamad Kugonza, co-owner of the clothing brand Suru (which recently closed its popup at 1624 Telegraph Ave.), has used the street closure on Telegraph and 16th Street as an opportunity to throw block parties on First Friday in collaboration with other neighboring businesses, including Uptown Juice Company. These events have drawn large crowds that he says will only continue to grow once Latham Square is complete.

“For me, Latham Square is going to be a good thing,” he said. “Every First Friday, I’m throwing music events in the street. That’s going to be what Latham Square will be once the park is built and we can use it to engage the community.”