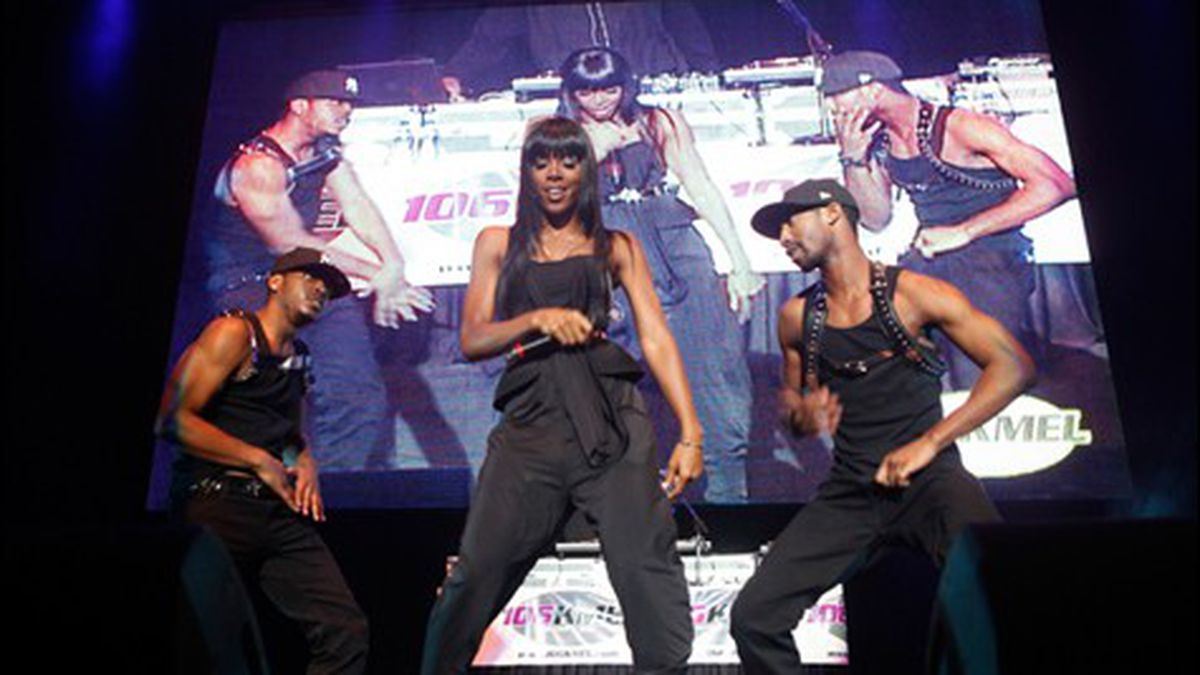 Shortly before midnight on Saturday, Twitter was all abuzz with revelations from this year’s KMEL Summer Jam. First and foremost: Southern rapper Waka Flocka Flame has man boobies — we know, now, because he ripped his shirt off in the middle of his headlining set. Also, undercover cops apparently drive a Chevy Lumina scraper when patrolling the parking lot outside Oracle Arena. And: It’s now socially acceptable to arrive to Summer Jam in a T-shirt that says “Swaggin’ in the Pussy.” Most important of all, there’s been a titanic shift in the hip-hop gender demographic. Judging from the audience at Oracle, it appears to be majority female.

Granted, that could be a function of the lineup this year, which heavily skewed toward R&B. Trey Songz was probably the main draw, but he stood in good company, alongside British songstress Estelle and ex-Destiny’s Child member Kelly Rowland. But it could also be a consequence of rappers changing their content in recent years. Historically, hip-hop has indulged many disparate interests — money, power, seduction, politics, avarice, masculinity, drug dealing, braggadocio, guns, phallic metaphors, etc. Now, it’s mostly about sex.

Well, sex and a few other things. But sex is clearly the main sell. That was apparent from the sheer number of leopard-print miniskirts and five-inch stiletto heels. Had there been one of those junior high school rules about hemlines, most of the audience would have been sent home.

If anything, the rappers encouraged it. Opener LoveRance, whose Tumblr describes him as an “artist, poet, college student, promoter, homewrecker, porn star, buns watcher, party starter, and all around cool kid,” kicked off the show with an expurgated version of his new song “Bounce on It,” which is uncannily similar to his old song, “Up.” Written in pretty much the same meter, both are upbeat boast-tracks about LoveRance’s skill with the ladies. It’s a little shocking to find that in person he’s just a roly-poly, baby-faced college student with a crew of equally innocent-looking friends, five of whom joined him onstage that night. One claimed to be Skipper, another drawly Bay Area rapper who cameos on many of Rance’s tracks. There was also a guy dressed in a bear suit, and a small toddler later identified as Rance’s niece.

So far, LoveRance has attained moderate success writing bouncy club hits about his libido. He’s young enough that they seem uncontrived — skirt-chasing and bun-watching might be the only things that pique his interest, right now. Still, it’s unclear whether he’ll have to stay in that vein in order to remain marketable. His elder peer, Erk Tha Jerk, went a different route, first establishing himself as an iconoclast (or “hood nerd”) before shifting to a more commercial-friendly Don Juan persona. Erk’s early singles — including the hyphy-diss track “I’m So Dumb” and the cranky bachelor song “Don’t Need ‘Em” — are by far his most imaginative. But he seems to be getting a lot more traction by making slow jams. He performed two of them at Summer Jam: “Hands Up,” which serves as a roll call for the single ladies, and “Beautiful,” which is actually a pretty heartfelt love ballad. Erk also tried reprising “I’m So Dumb,” but it didn’t elicit a very strong reaction.

What’s refreshing about Erk and LoveRance is that neither of them looks like a traditional romantic lead. The other local on the lineup, white-girl rapper Kreayshawn, also doesn’t strive for a lot of mainstream sex appeal — although granted, she did take the stage in a pair of daisy dukes. Still, none of them seemed as earnest, or as lascivious, as the night’s bigger stars, Kelly Rowland, Trey Songz, and Detroit rapper Big Sean (who doesn’t look all that big on the surface, but you never know). The only performer who didn’t spend a lot of time ravishing his audience was Lupe Fiasco, but he was distracted by technical difficulties.

Rowland was one of the night’s greatest highlights. Trained in the R&B boot camp of Destiny’s Child, she launched a haphazard solo career before the group disbanded in 2005, and it’s been hit or miss ever since. But this year was a hit, and rumor has it that the singer is now locked in silent competition with her more famous former bandmate, Beyoncé Knowles. Rowland’s new single, “Motivation,” which dropped in April, topped the Billboard hip-hop and R&B chart for seven weeks. The video is one step removed from soft-core porn. So is Rowland’s newly revamped stage show, which features a chorus line of male dancers. The two who appeared with her at Summer Jam had so many muscles that their bodies looked hyper-human.

By the time Rowland finished her set and made way for Lupe Fiasco, the 20,000-seat arena looked nearly full. Most aisles were packed with singing, bouncing, short-skirted, ebullient women, occasionally followed by their male suitors. Had the gender ratio been a little more equal, it could have been a singles event. In this case, though, women clearly held court. They gossiped loudly, started catfights, and cruelly snapped cell phone pictures of a man being dragged out by security guards. When Trey Songz ripped off his sweaty tank top and threw it in the audience, all the women listed forward. A man in section 108 checked sports stats on his iPhone. The man sitting next to him looked bemused.

So is hip-hop becoming a woman’s world? It’s hard to say. Content has certainly become more sensual, overall, and even the more hard-core rappers are opening a space for tenderness. Not to mention that some songs touch on empowerment themes: You could almost read “Motivation” as an ode to the female orgasm, whereas Kreayshawn’s “Gucci Gucci” promotes individuality and self-expression (if you buy into the “anti-consumerist” message, that is). Or maybe it’s more simple than that: Perhaps KMEL skewed the lineup to attract women listeners, if only to prevent fights from breaking out (as happened at Shoreline Amphitheatre during Summer Jam 2005). Maybe women constitute the bulk of radio listeners. Maybe the so-called “swag” movement is more woman-friendly than previous hip-hop trends, given that “swag” could either stand for confidence, or something you do with your hips.

Whatever the case, the themes of this year’s summer jam — love, envy, vanity, muscle tone, sex, and swag — all seemed calculated to please a female audience. It wasn’t until Waka Flocka got onstage at around 10:30 that the tenor of the show changed. Flocka, who is 25 years old and covered in tattoos, reinstated the old hip-hop practice of bringing a dozen dudes onstage with him. As his entourage stood by, Flocka’s DJ cued up “Hard in da Paint,” a hit from his debut album, Flockaveli. It’s a loud, theatrical track riddled with gunshots. “Pow, pow, pow, pow!” yelled Flocka and his goons. “Pow pow pow!” answered several thousand people in the audience. Gradually, the crowd thinned, and the gender ratio seemed more evenly distributed.

It wasn’t until the middle of his set that Flocka would flash his man-boobs — which might have been his concession to the overall feminine theme. It was a definite fail.