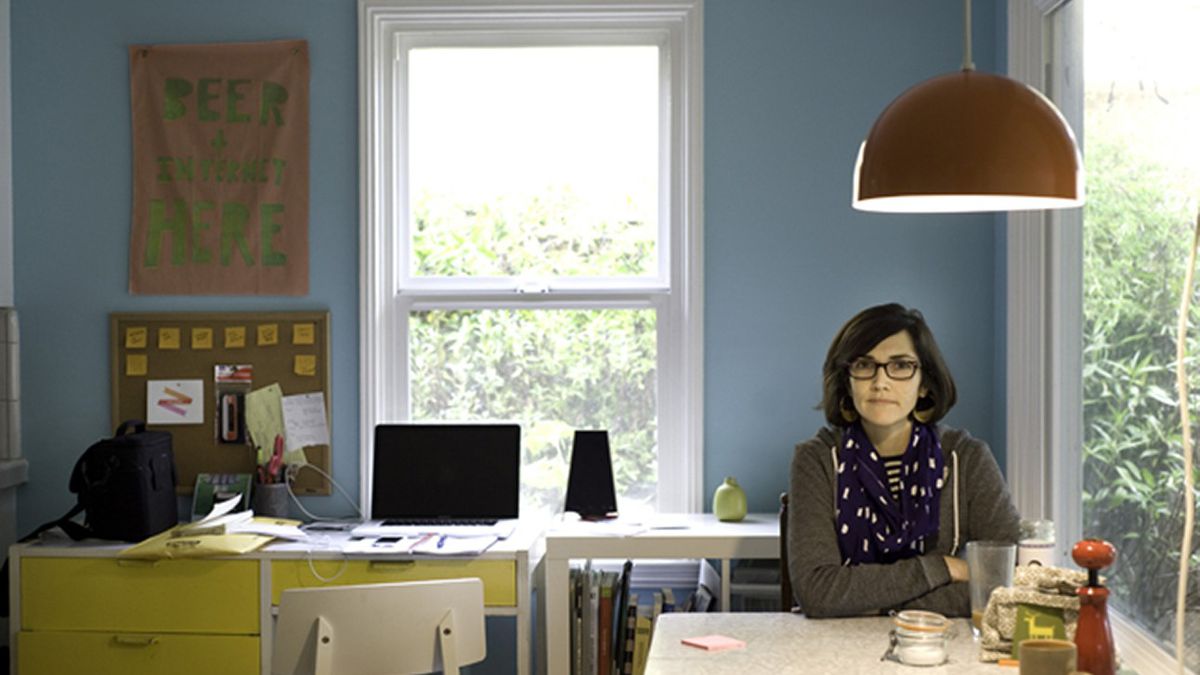 The Bay Area artist can be remembered through inspirational signage along San Pablo Avenue.

Susan O’Malley’s death came like a heavy storm at the height of a sunny day. On February 25, 2015, the celebrated Bay Area artist and curator unexpectedly collapsed and never regained consciousness. She was in her last week of pregnancy with twins when she died at the age of 38, along with her baby girls. Such a tragedy befalling a woman like O’Malley seemed unimaginable. For years, she made art grounded in optimism and inspiration. While motivational tools like pep talks and poetic quotes are often dismissed as cheesy or uncritical, O’Malley practiced positivity with sincere dedication, wielding it as a form of resistance against the oppressive negativity ubiquitous in contemporary life.

Just prior to her death, O’Malley had reached an early finish on her project for Kala Institute’s Print Public exhibition called Advice From My 80-Year-Old Self. Over the past year or so, she and her student partner, recent UC Berkeley graduate Julie Chau, interviewed pedestrians up and down West Berkeley’s San Pablo corridor, near Kala (1060 Heinz Ave.). They asked: “If you had the opportunity to meet your eighty-year-old self, what do you think she/he would tell you?” O’Malley then selected quotes from the assortment of answers and translated them into bold, multicolored posters. Most are supportive sentiments like, “You made the right choices, you made the right mistakes,” or “Your life is precious.” The posters will be displayed in the Print Public show, which takes place from May 7 to June 27. They can also be viewed online at AdviceFromMyEightyYearOldSelf.com.

Print Public, curated by Amanda Curreri, will culminate in an exhibition, but at its core is a two-year place-making initiative that involves six artists-in-residence developing and executing projects intended to connect West Berkeley community members to Kala and each other. For example, Sue Mark letter-pressed a series of 2000 bookmarks with references to the history of the neighborhood and directions on how to learn more. Then, over the course of several months, she slipped them inside of random books at the Gold Gate public library. Taro Hattori’s contribution, Swan Songs, involves interviewing community members about songs that remind them of someone dear to them, then installing recordings of those songs and testimonials in sculptural housings around the neighborhood.

With a mixture of friendliness and determination, O’Malley convinced two local businesses to allow her to display large-scale versions of her work on their buildings once her project was completed. That was the only aspect of her project that O’Malley left incomplete. So, during the second week of March, Curreri, Chau, and O’Malley’s family gathered to finish her project. They painted a large yellow mural on the front of Bob McGee’s Machining Co. (2735 San Pablo Ave., Berkeley) that states, “Less Internet, More Love” in big, black lettering. In addition, a banner with the words “Be You” hangs on the facade of Flooring Alternatives (2901 San Pablo Ave., Berkeley), near Signarama, where it was made and donated to the project. The public pieces offer an opportunity for those who knew O’Malley to visit her through her work.

On the day the mural was completed, I stood on the windy median at the center of San Pablo with the heartbroken Curreri, viewing the advice from a distance as cars whipped past us on either side. She said that the public piece is reassuring, because it attracts attention from people who never knew O’Malley, and view her work without the heavy knowledge of her life being cut short. That imbues it with a life of its own, defined not by authorship, but by reception — showing that the possibility of positivity still exists, even without O’Malley there to fight for it.

Print Public performances will take place throughout the exhibition. Free. Kala.org/exhibition.html or 510-841-7000.

Correction: A previous version of this article stated that O’Malley’s daughters passed away unborn. In fact, they were delivered, but died soon after.
Facebook
Twitter
Previous articleCrate: The New New Pop-Up Restaurant
Next articleWednesday Must Reads: Glazer and Bonilla Head to Runoff; State Enacts Rationing for Outdoor Watering
18,637FansLike
0FollowersFollow
67,429FollowersFollow

Our top DVD picks for the week of December 13