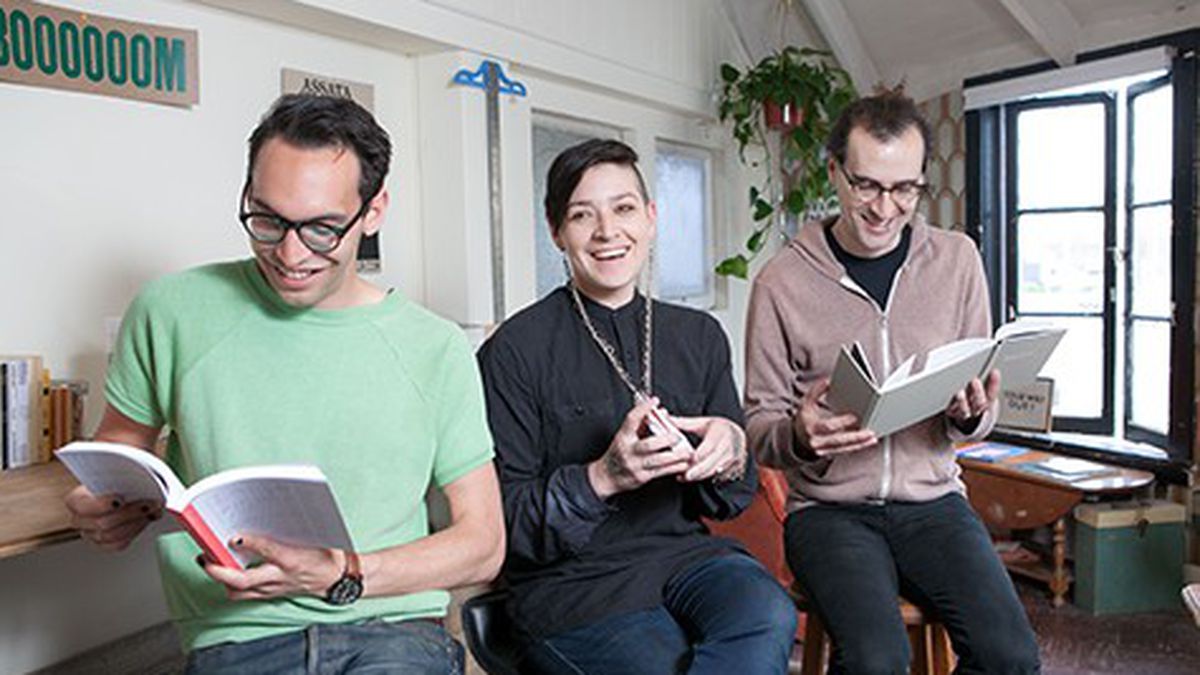 The local small press Timeless, Infinite Light has an appropriately poetic self-description: “Our books are spells for unraveling capitalism. We have a heavy West Coast lean toward the experimental / political / mystical.” The press is based in a corner of the community center Omni Commons that’s lined with silver wallpaper from the Fifties. It functions as a light around which many East Bay poets gather, a reflective surface that multiplies possibilities of expression, and a self-proclaimed “art cult.” It was founded by Emji Spero and Joel Gregory, and is run with the help of Zoe Tuck. All three individuals will keep you on your toes, questioning the sincerity of their witty remarks. Part of what they do is imbue a sense of whimsy and magic into the mundane, using words to activate the latent potential hidden behind assumptions and complacency.

To many, poetry may seem niche, but the East Bay boasts a flourishing poetry scene, rivaled by few others on the West Coast. Over the past few years, San Francisco’s artistic communities have been moving across the bay in hordes. That migration has included a “poet exodus,” as Tuck jokingly put it in an interview. “Now [in Oakland] you can’t spit and not hit a poet,” she said, met with a round of laughs from her colleagues. But it’s increasingly true. As Spero pointed out, it’s possible to go to three readings a night in Oakland, if you feel inclined.

Last year, Spero and Gregory, who share the editing responsibilities at the press, felt the need to capture a snapshot of the particular “poetic moment” they were experiencing. The result was a collection of poems by sixty authors called It’s Night in San Francisco, but It’s Sunny in Oakland. The work in that book emerges from the political residue of the Occupy movement. Many of the poems are explicitly about Occupy, but even the ones that aren’t seem tinted by the memory of it, oscillating between the political and the personal until the two are indistinguishable. “These are writers, but also the same people who are shutting down freeways, arranging strikes, and founding the Public School,” said Tuck, referring lastly to a fellow Omni organization that offers free classes to the public.

Timeless, Infinite Light now has six official titles under its belt, and on March 21 will release its seventh: The Louder the Room the Darker the Screen, a debut book of poetry by Paul Ebenkamp. The fragmented musings are at times jarring and at others numbing, interspersed with colorful text drawings. The release party will take place at Woolsey Heights (1638 Woolsey St., Berkeley) on March 28 at 8 p.m.

Books are $26, event is free. TimelessInfiniteLight.com