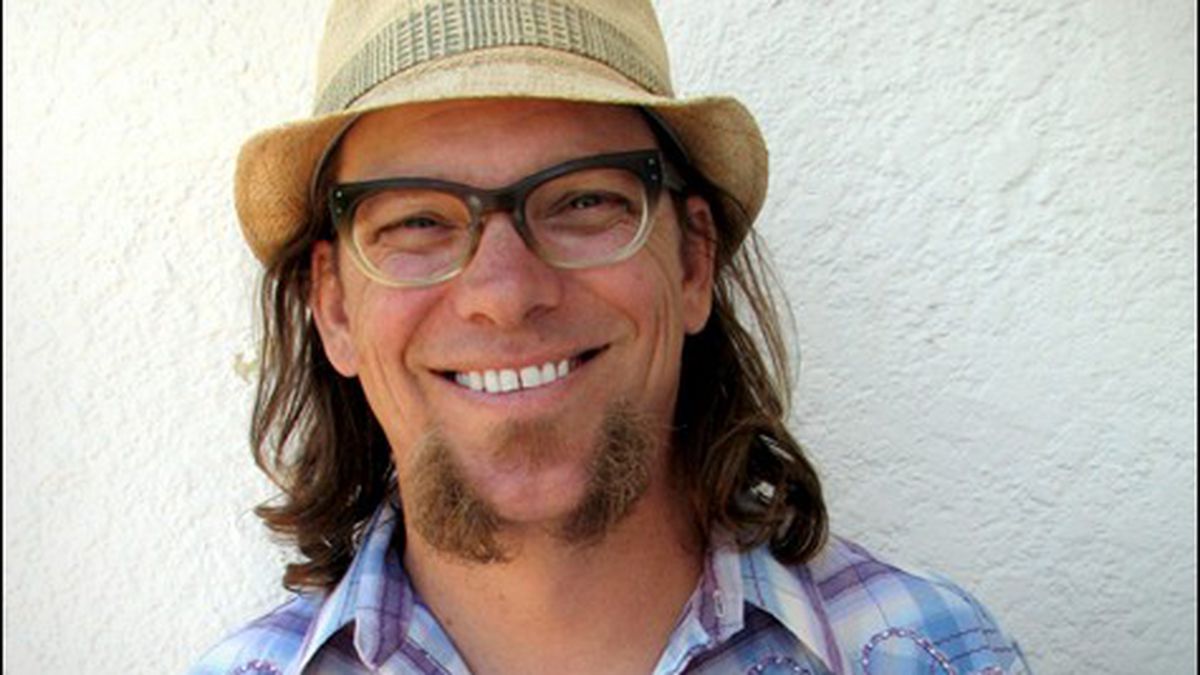 Joe Rut Versus the World

A superstitious person might come to the conclusion that Joe Rut is cursed. Others might say he’s just a victim of random but unfortunate circumstances. After all, as the Express documented two years ago, the Oakland singer-songwriter has experienced an inordinate amount of roadblocks in his music career: Over the course of a fifteen-year period trying to record one album, his studio burned down, his room flooded, his belongings were destroyed by roofers (twice), and his hard drive was stolen. Luckily, for a musician with a sense of humor — not to mention patience and tenacity, and maybe a bit of stubbornness — logistical hiccups just inspire him to persevere.

“I think I function at my highest when I have a foil,” Rut admitted on a recent Thursday afternoon. He’s certainly proven it to be true.

Eventually, Rut produced the (poetically titled) Injured While Faking Own Death, a collection of twangy rock songs with tongue-in-cheek lyrics about life’s everyday inanities (e.g., annoying people, his foot fetish, the ergonomically correct way to lift heavy objects). His CD release show two years ago — featuring a backing band of A-list local talent — sold out the Great American Music Hall, despite the fact that he’s a relatively under-the-radar local musician. He even professionally recorded the show, for the purposes of releasing a live album. It all seemed to make up for the series of calamities that had befallen Rut. But, unfortunately, his troubles weren’t over.

Because the opening song of his set was a cover of the 1957 folk tune “Plastic Jesus,” and because Rut is just a nice, honest guy, he decided he wanted to “do the right thing” and hunt down the copyright holders to pay them mechanical royalties for the right to put their song on his CD. What Rut didn’t realize was that because he added his own verses — plus his own chorus and slightly altered chord structure — to the original two copyrighted verses of the song, it was no longer considered a “cover” but was instead a “derivative work.” And that complicated things.

Usually, an artist doesn’t need a copyright-holder’s permission to record a cover; he or she only has to pay a modest “mechanical royalty” rate of 9 cents per manufactured CD. But to record a “derivative work,” a performer needs to get the copyright-holder’s permission — and apparently the copyright holder can set any price and terms he or she wants. As it turned out, EMI Music Publishing held the copyright to the song, even though it was originally written and performed by Ed Rush and George Cromarty.

When Rut finally got an email through to EMI’s lawyers, they responded with the following terms:

1) An upfront payment of $1,500 (protecting against any future royalties, even though Rut was only printing 1,000 copies of the CD, or about $90 worth in mechanical royalties).

2) An agreement to give 100 percent of the copyright of the entire composition — even the parts Rut wrote — to EMI.

3) A statement saying that EMI hired Rut to write the composition as a “work for hire.”

“Which isn’t what happened,” said Rut, stating the obvious. “So it’s like, I’m paying you but it’s a work for hire? It completely stopped the production of this album for eight months.”

But the irony doesn’t end there: In his research, Rut discovered that Rush admitted in a 1964 interview with the folk magazine Broadside that he and Cromarty didn’t even write the song; the lyrics were written by a “co-ed” of an acquaintance, and they simply put the words into meter and set it to music. Further, Rush also stated that the song was originally an African-American spiritual.

To Rut, the absurdity was epic. “It puts me in this weird situation where I’m dealing with the attorneys for a company that own a song that did not write the song, that bought the rights to the song from the purported authors of the song who, if you do the research, turns out they didn’t write the song either.”

Unable to afford the $1,500 EMI demanded, and unwilling to sign over copyright of a song he partially wrote, Rut counter-offered: $400 and co-ownership of the song. But EMI didn’t respond, effectively leaving him with the decision to either omit the song from the live album or agree to the terms. Instead, Rut decided to hire an attorney, who told him he could avoid any royalty payment by turning the song into a parody — meaning commenting satirically on the song, the authors of the song, or the representatives of the authors of the song (i.e., EMI). So Rut entered the studio and overdubbed a couple lines over the original copyrighted lyrics he sung in the live version: Hey, I don’t care if it rains or freezes/That’s the first line of ‘Plastic Jesus’/Taken from an earlier song that Ed Rush knew/Now the copyright lawyer got me singing the blues/Wants too much cash upfront to use/Tell me what would Plastic Jesus do? He retitled it “The Song That Is Not Plastic Jesus.”

“Ultimately, it makes for a poor song,” Rut admitted, laughing. “It was a much better song when it had the flow based on the original lyrics. But that’s how we started the show. … There’s an excitement and an energy to the performance, and I wasn’t about to nix it from the album because of all this.”

All these complications would probably make a normal person’s blood boil, head spin, brain explode, etc. But Rut also realized (maybe a little superstitiously) that he could have been partially responsible for the situation. Upon releasing Injured While Faking Own Death, he actually launched a tongue-in-cheek campaign to get someone to sue him — specifically, the band U2.

Midway through writing the song “Control Freak,” Rut realized that it sounded quite similar to U2’s “With or Without You.” Instead of scrapping it, he went with it, and even embraced it, hilariously breaking into the With or without you chorus at one point. Rut knew full well that the experimental Bay Area band Negativland became well known when it was sued by U2 in 1991 (for its U2 EP, which contained parodies of the band’s “I Still Haven’t Found What I’m Looking For” hit single).

Rut’s attempts to get U2’s attention ultimately failed, but EMI was another story. “It’s ironic, almost like I brought this energy onto myself,” Rut said.

Luckily, Rut takes this all in stride. He doesn’t take himself too seriously, and he’s also fairly self-deprecating, which plays well with the singer-songwriter persona he’s developed over the years.

It started when he was a kid growing up along the Central Valley: in Bodfish, Bakersfield, and Stockton. Forced to take piano lessons as a kid, Rut really wanted to play guitar like Ace Frehley of KISS. He was also influenced by the country music his father listened to — Johnny Cash and Marty Robbins — and by the pedal-steel player who lived down the street from him. Instead, Rut’s parents gave him a nylon-string guitar in sixth grade and paid for guitar lessons during which he learned how to play “Mary Had a Little Lamb.” Needless to say, it wasn’t exactly what he had in mind.

Rut didn’t pick up the guitar again until high school, when he “played some stupid little blues tune” at a couple open mics — it sounds reminiscent of what Blues Hammer played in the movie Ghost World. Except for a couple cover bands he joined in college, music was really no more than a hobby for Rut. In 1991, he moved to the Bay Area, where he worked for an environmental consulting firm. But when it closed, Rut decided to pursue music as a career full-time.

With his savings, he bought recording equipment (an ADAT machine, which, he notes, became obsolete almost as soon as he bought it), a drum set, a bass, and a pedal steel. He holed up in a cabin in the Sierras for two years without a TV, a computer, or Internet, and learned how to play, record, and sing harmonies by trial and error — a process he says was instrumental in helping him develop his own sound.

“When you have to learn it on your own, you develop a sound of your own,” he said. “If you just look up everything and it shows you exactly how to play it, it seems like you would be less likely to come up with some unique mistakes that start to become like your own sound. I think mistakes is how music actually progresses.”

After he returned to the Bay Area, Rut marketed himself as an engineer to local bands, and ended up joining them as a guitarist, too — most notably with 86, The Spikedrivers, and Loretta Lynch. But gradually he realized he wanted to write his own compositions, which he did, by himself.

Joe Rut Live is Rut’s sixth CD, and he says it’ll probably be his last physical release. His upcoming CD release show at the Great American Music Hall will be quite the meta experience — a CD release show for a live CD that was recorded at the CD release show for his prior CD. The event will also be an 86 reunion of sorts, as The Low Rollers, featuring two former members of 86, will open. The other two members may sit in as well.

Despite all the headaches, Rut says he’ll continue to write songs — he probably couldn’t stop if he tried — and hopes to finally embark on his first tour. But he says he’ll never record a cover song, and definitely not a “derivative work,” ever again.

Speaking of which, there’s actually another layer of irony to the “Plastic Jesus” debacle, and that is that the original song is actually a parody (of an ad) in itself. But, to Rut, it was finding out that Rush and Cromarty didn’t actually write the song that was the kicker.

“Comedy is based on absurdity and exaggeration,” he said. “There’s a point in the story where it becomes so absurd that all of a sudden it just clicks from being tragic to funny. And that’s where a lot of my songwriting kinda comes out of. …

“I’m thankful that it went that far, because if it had stopped shy of that mark, I would just be pissed off right now. But instead I can totally laugh about it.”