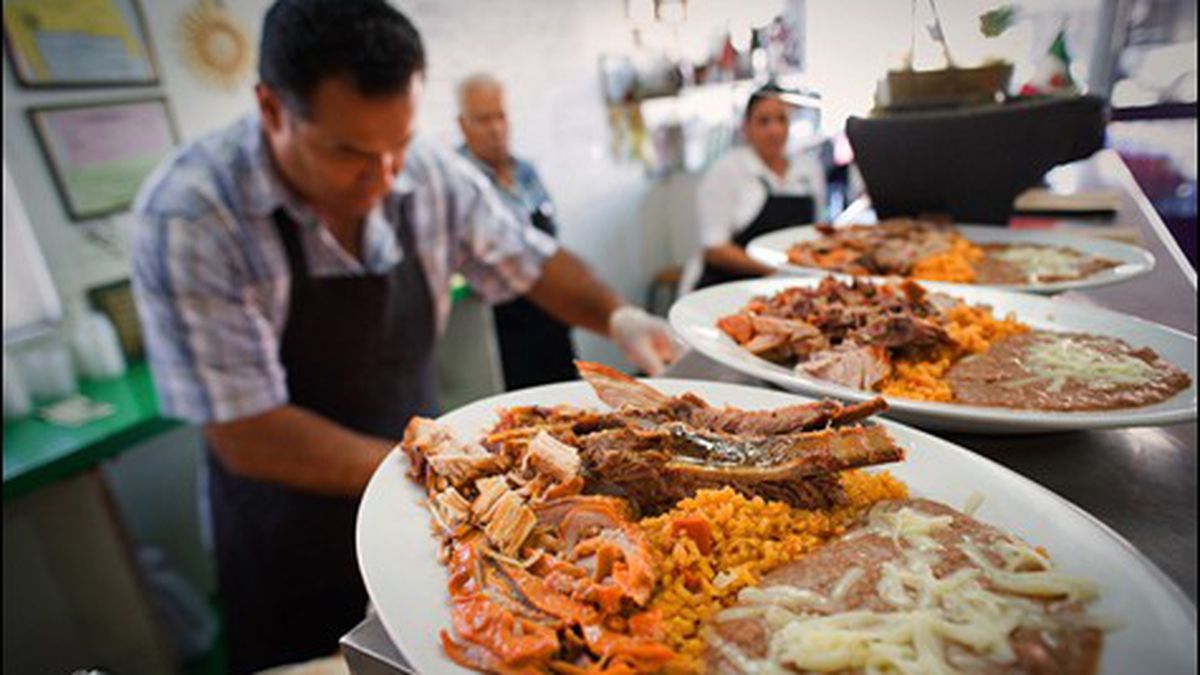 In Praise of Carnitas

Searching the Fruitvale for the porky center of Mexican cuisine.

There aren’t many foods more satisfying than carnitas: well-marbled pork browned slowly in its own rendered fat until fragrant and tender and caramelized at the edges. Often seasoned with nothing but salt, well-prepared carnitas are equal parts simplicity and decadence — a dish drunken frat boys can appreciate as much as fussy gourmands.

In the East Bay, the best carnitas are found — no surprise — in Fruitvale, and I’d planned to spend a week sampling four or five different versions. But these “little meats” (a deceptively dainty translation) aren’t for the faint of heart. By the end of my first meal, stuffed to the point of discomfort, I realized it would be a folly to try to eat four or five carnitas plates in the course of a given week.

So I narrowed my focus to the two places I’d heard were the best of the best: Jalisco Restaurant and Casa Jimenez.

Here in Oakland, Jalisco is the OG of the carnitas game: a local, family-owned institution dating back to the late Sixties when owner Antonio Vasquez’s father, Bartolo, opened the restaurant. Open weekends only, Jalisco is the very definition of a hole in the wall, with little decor to speak of and long tables not so different from the kind used for church-basement potlucks.

According to Vasquez, the restaurant sells at least 350 pounds of carnitas in a given weekend. All day long, locals line up at the counter to buy meat to go (a steal at $8.50 a pound). If you’re dining in, one full plate — which comes with rice, refried beans, and fresh tortillas — is plenty of food for two.

Up until recently, Vasquez’s brother, Ramón, tended to the pork; now, Antonio’s nephew, Juan, keeps the family legacy alive. For more than three decades, the restaurant has stayed true to a traditional recipe from Bartolo, Vasquez’s hometown in Michoacán, the Mexican state most famous for carnitas. Instead of the pork shoulder/butt favored by most of the area’s Mexican eateries, Jalisco uses whole pork legs. And while a lot of places essentially deep-fry the pork (leading to meat that’s crispy but dry), Vasquez and his cooks take their time, slow-braising the legs in lard for eight to ten hours. The result is a style of carnitas that’s fairly unusual for the Bay Area — not crispy at all, but exceedingly tender and moist, not unlike Italian porchetta.

You have the option of “meat only,” which is all leg meat — tasty enough, but prone to be a touch too lean and, thus, dry and bland. More daring eaters are much better off with the “mixed” plate, which comes with a little of everything that gets cooked with the leg: extra-juicy rib meat, little flecks of skin (cueritos), bright orange and chewy-fatty slices of the pig’s stomach (buche), and wonderful gelatinous bits from the tendon and hoof.

Also noteworthy: the small mortar of excellent, zingy salsa verde on every table and two kinds of chicharrones (fried pork skin) — thick and thin — which you can eat straight-up (with a spritz of lime) or crumbled over your carnitas to add an extra element of texture to each makeshift taco. Go early in the day if you can; otherwise, the best cuts of pork sell out, as do popular side dishes, like the nopales (cactus paddle) salad.

Popular opinion has long dictated that Jalisco is king in the Bay Area, but what propelled me on this quest was a post on Chowhound declaring the carnitas at a relative newcomer, Casa Jimenez, to be the “Greatest of All Time.” In January, the restaurant was opened by the folks who own the building (a bright, gaudily colored space), the Los Mexicanos market next door, and the taco truck in the adjacent parking lot.

The owners rehired the kitchen staff from the building’s former occupant, Taqueria Zamorano, and, as the story goes, it’s these cooks who are responsible for the restaurant’s carnitas. Although they’re also listed as being in the Michoacán style, these carnitas couldn’t be more different from Jalisco’s version. According to my server, the pork shoulder — not the leg — is used, and the meat is roasted in the oven for at least part of its cooking time.

Whatever magic they’re using, these carnitas were a textural marvel — so many different textures in a single cut of meat. There were wildly frizzy strands that were super-crunchy all the way through, but also parts that were fatty and tender underneath a crisp exterior, and everything in between. The meat was plainly seasoned, but savory enough to eat without condiments. It only took a couple of bites for me to declare these my new personal carnitas favorite.

The corn tortillas at Casa Jimenez are also fantastic: thick and steaming — almost too hot to touch — with an intense corn fragrance. Each order of carnitas comes with a small tub of guacamole, which helps lighten the experience of each bite. (Also available are a red salsa and a tomato-heavy pico de gallo — both are spicy but fairly ho-hum.)

As carnitas focused as I was, I had little opportunity to explore the rest of the menu, but the $5.95 chimichanga is worth ordering for the spectacle alone: the deep-fried burrito comes out looking like the world’s biggest egg roll, with shredded lettuce, tomato, cheese, and sour cream in the “overhang” of the tortilla. We ordered ours filled with carnitas (of course), but the meat wasn’t as good prepared this way — both drier and lacking the crisp edges.

Finally, if you’re still able to walk at this point, consider an order of Casa Jimenez’s excellent house-made flan, which offers a smooth, creamy, smoky end to your meal — perfect for tipping you over the edge into a deep, food-induced slumber.