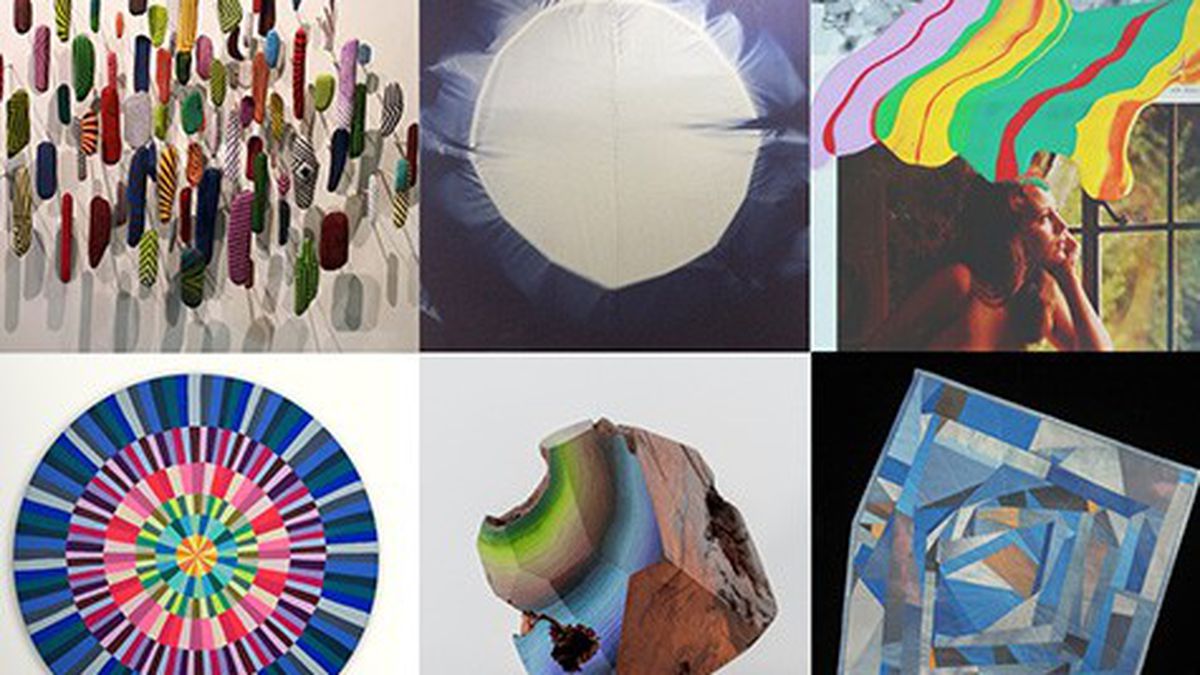 In ‘I Look for Clues in Your Dreams’ at Berkeley Art Center, Artists Rethink California Landscapes

I Look for Clues in Your Dreams is the best landscape show that the East Bay has seen in a while. And that’s primarily because there are no depictions of landscapes in it.

Rather, the group show that opened at the Berkeley Art Center (1275 Walnut St.) this past weekend could be considered “post-landscape” — if you’re into made-up, hyphenated terms — with work that deconstructs the artistic act of capturing an environment. In that process, the quilt that is California unravels into a conceptual entanglement of Bay-centric, West Coast mythology: psychedelic romanticism, utopian idealism, environmental spiritualism, and lots of vibrant colors.

As curator Heather Marx put it: “By looking for clues in these artists’ works, I hope to tell a story about this powerful and complex ‘dream’ of Northern California and its bewitching hold on our collective imagination.”

That story stars a group of Bay Area artists, who were plucked from different pockets of the art world but whose works swap stories around the same proverbial campfire. That’s to say, their practices are all fundamentally informed by the light and landscape of California.

Ironically, Marx came up with the concept for the show while in Miami, Florida. The Bay Area independent curator was walking through the Untitled Art Fair at last year’s Art Basel when she was stopped in her tracks by the work of Chris Duncan. The piece was a fifteen-foot-tall, deep-maroon textile that had been partially bleached by the sun. To create it, Duncan built a round, table-like structure and wrapped it in cloth, then left it on a roof in Oakland. He began the process on a full moon and “harvested” the work six full moons later. After it was washed, he stretched it out across a wall to reveal what looked like a lunar portrait — a central circle defined by the absence of color, with soft edges that resemble a cosmic glow. That simple, six-month-long exposure is what caused Marx, who had been meditating on her feelings for California, to stop and say, “Oh my god, that’s exactly how I feel.”

Like for Marx, place is important for Duncan’s work. That’s obvious in the site-specific process required to create his sun-bleached pieces. The Oakland artist and musician, who also runs a small press and record label called LAND AND SEA, began sun bleaching in 2012. It was winter time, and he and his wife decided to put pieces from their quilt collection over their many bedroom windows in order to keep out the cold. But when they took the quilts down in the spring, the quilts had been altered by the light, rendering additional shapes into their compositions.

At the time, Duncan was feeling disturbed by the role that ego plays in the art world and was grasping for ways to distance himself from his painting and sculptural practice. The sun bleaches clicked as a poetically symbolic way to relinquish authorship over his painting while retaining the play of light and shadow that he was long interested in. “A painting is a simple gesture repeated over time to the point of transcendence in which it becomes an art object,” Duncan said. “In these pieces, that simple gesture is the rising and setting of the sun.”

His contributions to I Look for Clues in Your Dreams have the look and scale of the piece that Marx saw at Basel — although each of Duncan’s light paintings have their own untended idiosyncrasies. The two textiles, hung on either side of a temporary wall in the center of the gallery, provide a strikingly simple example of a work that captures a California landscape but does not offer a picture of one; work that, rather, was made in collaboration with a landscape, and so reflects its character in the way that artwork always echoes something about its author.

The rest of the work follows suit, forming a show that is clearly concept-driven, but also has strong aesthetic coherence.

“Teetering,” a painting by avid surfer Leo Bersamina, shows a pool of deep blue, spotted with colorful, fluid, overlapping shapes — like light dappling on water, but seen through an abstracting fog. Bersamina mixed mica into his paint, which adds a glistening effect that evokes a subtle current and prompts viewers to sway back and forth to activate it. He also created an elaborate installation made of painted driftwood, collected after sessions in the water.

Victoria Wagner’s contributions include three chunks of redwood, partially cut into crystal-like shapes and partially left rough, with a richly colored bark. On select smoothed surfaces, she painted over natural patterning with rows of colors that blossom into a rainbow gradient. Meanwhile, Oakland’s Amber Jean Young offers quilts patterened in similarly crystalline shapes. The fabric she uses are printed with photographs she took of the sky at different times of the day, thus creating a kaleidoscope of clouds and sunsets. Specifically, the skies she uses are ones seen from her former house in Santa Cruz, rendering the quilt not merely a portrait of a place, but also a portrait of a home.

I Look for Clues in Your Dreams, which also features work by painters Jenny Sharaf and Kristen Farr, does feel distinctly Californian. But it also feels contemporary — subtly reflecting a relationship to place that has been radically shaped by the emergence of digital spaces in the last twenty years. These are not the same landscapes that Ansel Adams captured in the Forties and Fifties — environments that are devoid of people and define an idealized sense of “Nature.” Rather, today’s California landscape is abstract, fluid, fragmented, and engaging. And the works in this show reveal the emotional aspects of that landscape, the memories embedded within it, and the mythic quality that makes it much more than just a place.