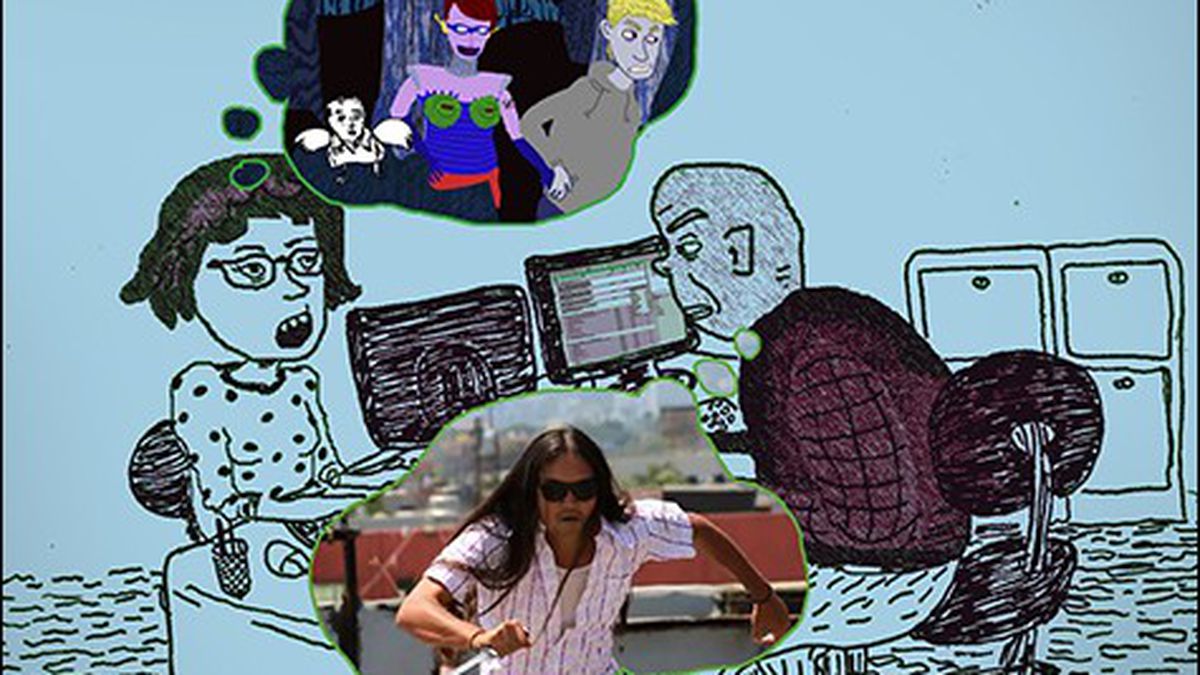 Rock Paper Scissors Collective and The New Parkway team up to bring movies imagined by artists to life.

The group exhibition, Imaginary Movies, features posters, trailers, and installations based on the imagined movies of the Oakland- and Los Angeles-based artists. Their creations include a movie set for a fake horror film, promotional posters for movies featuring members of a fictional celebrity family, and a screening of endless credits but no actual movie.

Oakland-based artist and animator Teppei Ando, who curated the exhibit, said he has always had a fascination with movies and includes movie tropes (such as montages) in the music videos and comics he creates. He began making his own movies in 2011 and started hosting small viewing parties with friends. In the summer of 2012, he and fellow filmmaker Matt Hewitt screened their films in a friend’s backyard in Los Angeles. When more than eighty people turned out, Ando and Hewitt realized there was enough demand that they could be showing their work in an actual theater.

More recently, when Ando began thinking about his next art show, connecting movies to other art forms seemed like a natural choice. His goal was to encourage the audience members to believe in the possibility of executing their own creative ideas, even if they didn’t have a lot of resources. “Making movies seems far-fetched, but I did this [exhibit] with almost no money,” he said.

Ando also approached the program coordinator at The New Parkway Theater (474 24th St., Oakland) to see if the movie house — with which Ando said he has been obsessed since it opened — would collaborate with him. In conjunction with the gallery show, which opens on Friday and runs throughout October, a selection of trailers made by the artists, as well as short films by Ando and Hewitt, will screen at the theater on Saturday, October 5. Ando will be showing his animated short Deadly Garden, a comic thriller based on the life of Sacramento serial killer Dorothea Puente, at The New Parkway. Like many filmmakers, he dreams of eventually screening his work at prestigious film festivals such as South by Southwest and Sundance, but for now he’s happy to play his film on a big screen instead of in a backyard.

Screening starts at 3 p.m. ($7) and will be followed by food, drinks, and music at the Rock Paper Scissors gallery, and performances by Postcoitus, Barfth, the Steganothings, and Excelsior Sessions at the Stork Club (2330 Telegraph Ave.) later that night. ImaginaryMovies.Eventbrite.com