At Cholita Linda's new Temescal brick-and-mortar, it's a taco party every day. 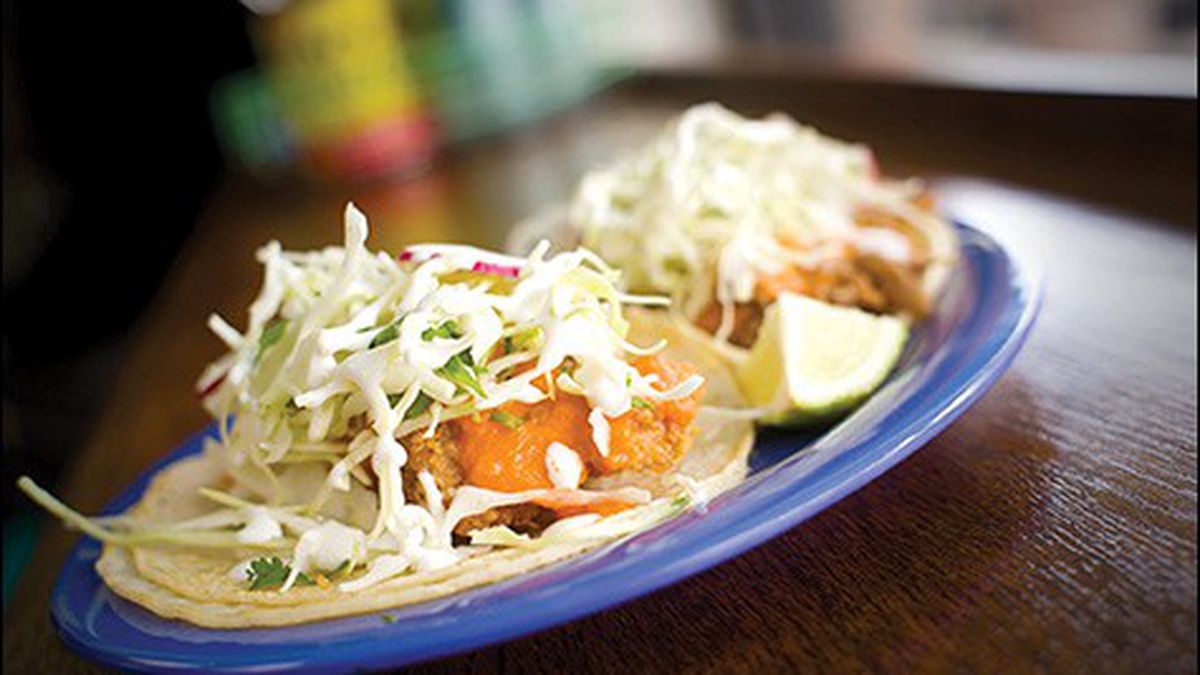 At Cholita Linda, Temescal’s long-delayed, newly arrived taqueria, the music sounds as if it’s piped in straight from some street fair, the walls and counters are painted brilliant pastels, and the room seems impossibly bright (thanks to all the skylights) even on the grayest, gloomiest day. Leafy tropical plants and a faux balcony make you feel as though you’re eating in an outdoor courtyard — and if you’re craving the real thing, you’ll find an actual courtyard out back.

To say that the restaurant feels festive is almost to sell it short. But for fans of Cholita Linda and its legendary Baja fish tacos — which were previously sold only at festivals and farmers’ markets — chef Vanessa Chavez’s simple, soulful food is the real cause for celebration.

While the food-cart version of Cholita Linda only sold tacos, the brick-and-mortar aims to be more of a “pan-Latin” restaurant — a term that brings to mind fusion cuisine and, too often, traditional food that’s been gringo-ized and “cheffed up” beyond recognition, in hopes of appealing to an upscale customer base. But for Chavez — who is of Mexican, Cuban, and Peruvian descent — pan-Latin food is just what she grew up eating.

For now, during the restaurant’s extended soft-opening phase, Cholita Linda is mostly a taqueria. I’m not complaining. There are five taco options, all of them good, but the Baja-style fish taco is king for a reason. The Bay Area is mostly a land of grilled-fish tacos and barely-passable fried-fish tacos. Against that dreary backdrop Cholita Linda is a veritable beacon of light: The batter-fried tilapia is crunchy and surprisingly light; the corn tortillas, delivered to the restaurant fresh daily, are soft and toasty. But the genius of the taco is how well the components complement each other — the heat of the tomato-based salsa roja, the cooling effect of the white Baja sauce (made by mixing house-made aioli and Mexican crema), the crunch of the shredded cabbage, and the zing from a squirt of fresh lime juice.

Nearly as good as the fish taco is the tofu version — the restaurant’s least traditional, and perhaps most stereotypically “Californian,” item. Chavez said she wanted to make a fish taco that vegetarians could eat, so she marinates slices of organic firm tofu using the same seasoning blend she uses for the fish. Once fried (with no batter, making these tacos gluten-free as well), the tofu becomes a textural marvel — the perfect mix of squish and chew — with a surprising depth of flavor: savory, umami-laden, and slightly nutty like fresh cotija cheese. The dish is a sharp rebuttal to anyone who’s ever complained about tofu being bland.

For carnivores, there’s a a very good carne asada — nicely charred but still tender. The chicken taco and pork carnitas taco, on the other hand, were merely pretty good. The chicken (dark meat cooked on a vertical spit, al pastor-style) had more flavor than your run-of-the-mill grilled breast, and the pork was plenty tender (although I’d have preferred a fattier cut). But for these tacos, the traditional Baja taco condiments — the cabbage and the crema-based sauce — didn’t make as much sense; they didn’t quite make the tacos more than the sum of their (still excellent) parts.

Those are minor quibbles, however. What I like best about Cholita Linda’s tacos is that they’re street-style — made with care and using much better ingredients than you’ll find at your typical lonchera, but also completely unfussy: just four or five simple components wrapped in a corn tortilla.

The setup of the restaurant stays true to that carefree air. The name Cholita Linda translates to “pretty girl,” but Chavez explained that Peruvians use the term “cholita” to refer to the indigenous and mixed-heritage women who sell food at the markets — and it’s that market vibe that she has sought to capture at the restaurant: You place your order at the counter and, on most days, the food comes out to your table faster than if you were at a food truck.

For now, besides the tacos, the menu only has a handful of other dishes, but these give a glimpse of the kind of home-style food Chavez is passionate about — the kinds of things she said she’d eat at her grandmother’s house as a kid. There are two hot sandwiches, made in a cast-iron panini press: one, a fairly traditional Cuban version (pork shoulder, ham, pickles, and mustard), and the other, my favorite, a Peruvian-style roast beef concoction. What I liked was the crunch of the pressed French bread and the structural integrity of the sandwich, which was able to contain the abundance of garlicky aioli and juices from the tender beef, as well as the lightly pickled, caramelized onions; oozy melted cheese; and a layer of lemony arugula.

The only entrée-size plato is a Cuban picadillo, a slurry of cinnamon-y ground beef that had the texture of a wet sloppy joe, served with rice, salad, and fried plantains. The highlight, though, was a little bowl of intensely flavorful black beans, which had been cooked low and slow until they were super creamy. They’re one of the very best things to eat at Cholita Linda.

Indeed, frugal diners will find that the $3 side of rice and beans makes for a delicious light lunch all by itself. Add a couple of tacos and one of the excellent, refreshing agua frescas ($3.50) and you’ll have a meal that feels positively celebratory.

The splashiest menu addition, hopefully on its way soon, will be Peruvian rotisserie chicken: a whole or half-chicken served with sides such as fried yucca, French fries, and aji dipping sauces — the kind of family-style take-home dinner that the neighborhood could really use.

Chavez is taking her time to roll out new items. Given that the process of getting the restaurant open took about two years longer than expected, what’s another couple of months? Besides, as of this printing, Chavez was nine months pregnant, and had only recently stopped working the line.

The timing might not be what Chavez and her husband Murat Sozeri had planned on, but anyone would agree that a new child and a new restaurant, all in one year, is something worth celebrating. Preferably with plenty of fish tacos.