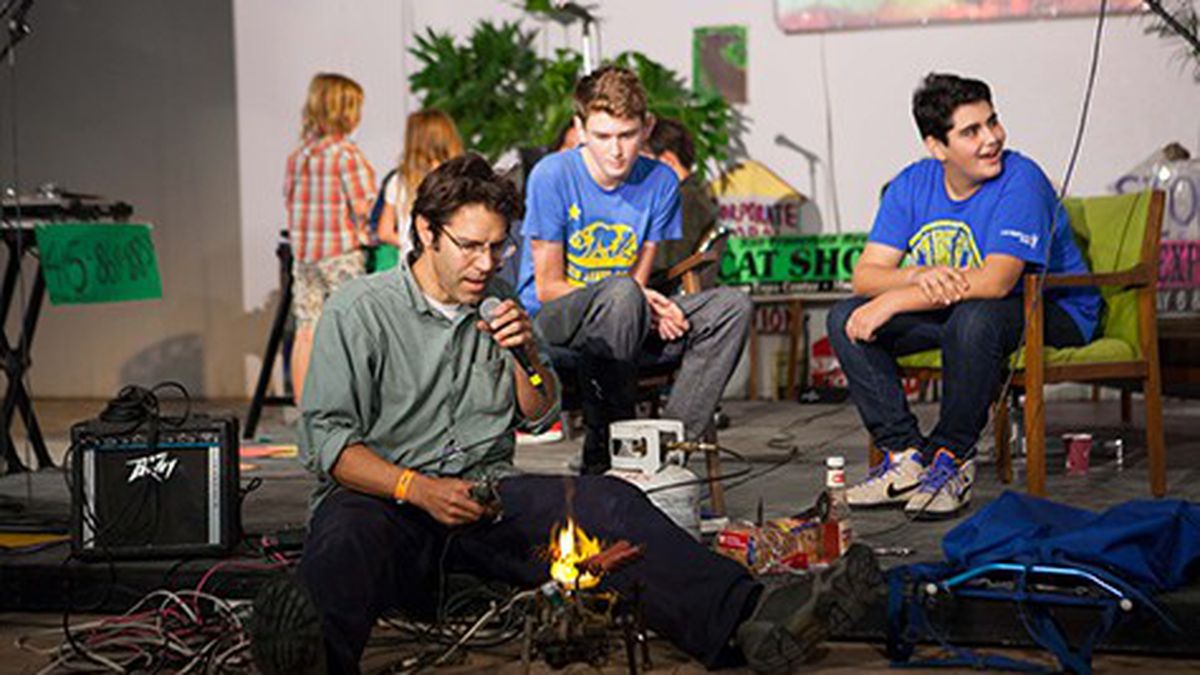 Two hours into The Lab’s 24-hour variety show and telethon — broadcast live online in the final day of a crowd-funding campaign to benefit the storied San Francisco arts space — a deep rumble suddenly beckoned the crowd outside, to the corner of 16th and Capp Street. There, a flatbed truck held a steaming, fire-spitting black contraption the size of a fuel-efficient car. The sound — a cacophony of alternating high and low end — put to shame other use of descriptions such as “punishing” and “assaultive.”

The force of the so-called “Flame Whistle,” actually a jet engine retooled to amplify an emergency siren, flattened bodies against The Lab’s façade like pieces of tissue paper. Shortly, a patrol car halted in the middle of the street and two officers clambered toward the device while making justly pained expressions. The operator — Mark Pauline of the long-running guerilla robotics outfit Survival Research Laboratories — shut the machine off, looking crestfallen. The cops staggered away muttering, “Holy shit.”

The violent sonic transgression felt apt for the occasion. Since its founding in 1984, The Lab has hosted the work of artists such as Mike Kelley, Nan Goldin, Jack Smith, and Bruce Conner. Along with institutions like Aquarius Records and Artists Television Access, The Lab is a countercultural nexus in the rapidly gentrifying Mission District. One of the hosts, comedian and playwright Marga Gomez, wondered grimly if it’s illegal to walk down Valencia Street with brown skin yet. However briefly, Pauline’s blaring machine voiced the pride of an obstinate anomaly.

And the rallying cry was needed. The Lab has appeared somewhat rudderless for the last few years, enduring mismanagement and unfocused programming. Now, the new director, Dena Beard — tireless maestro of the 24-hour soiree — is bringing renewed vigor and ideas to the organization.

Beard’s first accomplishment, reaching and exceeding a $50,000 fundraising goal, was aided by a groundswell of local support and media coverage from as far and high as The New York Times. The funds will contribute to, among other things, underwriting programming and an ambitious interior restoration meant to reveal The Redstone Building’s original character as The San Francisco Labor Temple, a gathering place for unions and community organizers.

Even the language of that particular project distinguished The Lab from its nearby neighbors on Valencia Street. In a city buzzing with talk of “development,” “resurgence,” and other march-of-progress jargon, The Lab phrased its interior project as a work of “excavation.”

Not that the 24-hour telethon stooped to nostalgia, or even blanket tech resentment. The event featured mesmerizing dancers from Oakland’s TURFinc undulating to E-40; panel talks from people who used the word “technologists” as they unpacked the concepts behind the word “privacy”; thirty suited gentlemen singing a cappella Leonard Cohen songs; attorneys and arts advocates parsing rent control laws; drag star Peaches Christ adjusting a wig the size of a car engine; the performance artist Fauxnique in a severe arts-socialite ensemble interpreting Brian Eno’s “Cindy Tells Me” as a feminist parable; Jello Biafra expounding on the origins of his pseudonym; and lots of seemingly unsupervised children, oblivious to the physical and virtual spectators.

The backdrop behind the stage area featured a garishly painted light box, potted plants, and a growing assortment of hand-scrawled signs. At a phone bank, artists crafted original works to bait call-in donors. It had the whimsy of Neverland and the conviction of an unpermitted political rally.

Bottles of bubbles circulated. Someone peddled ceramic mugs with bottomless whiskey. Kal Spelletich, another Survival Research Laboratories associate, surrendered control of a tiny four-legged robot that spat five-foot flames at a grinning teenager. It also cooked and served a hot dog to a puppy. All of that occurred before the sun went down.

As the evening arrived, the scene broke into gleeful confusion. The swelling crowd’s attention fractured into countless conversations and microphone shouts and whooping responses became blips among the din.

A spat of comedy ensued with Sunshine Alliance, a hysterically out of touch trio of bow-tied faux auctioneers and proud Floridians sharing their observations of “Frisco.” Another local comedian, Kaseem Bentley, skewered the crowd for looking like “substitute teachers” and “assistant managers at Urban Outfitters,” then singled out couples and identified the glue of their relationships in single words (“art,” he pointed. “Drugs.”).

The Extra Action Marching Band brought the night to a fever pitch, as dancers wearing strap-on breasts disregarded the invisible boundaries imposed by the cameras to forcibly involve the crowd. It was a riotous climax, and then SF Underground Short Film Festival host Sam Sharkey chaperoned a dwindling and increasingly delirious crowd into the weirder recesses of the night.

Horror shorts segued into techno in the afterhours. When Odi Me started skillfully preparing a salad on stage to the hum of ambient music, it felt almost menacing. Shortly before dawn, he performed a karaoke rendition of Meredith Brooks’ “Bitch” and it struck terror in the hearts of the few weary attendees.

The event’s eclecticism lent itself to some misses, but even the more quixotic, outlandish performances — such as an elaborate one-man band mechanism on a riser whose operator neglected the songwriting part of his act — reflected what Beard said in an early panel discussion: “The Lab is also a place for failure.”

Indeed, not-for-profit arts spaces are crucial for indulging whims and bold experiments. The video artist Kembra Pfahler reinforced as much in her testimonial clip, which cast The Lab as an antidote to the gallery racket and its “homogenous boutiques.” In a short program, the unfocused selections might’ve tired a bit, but strewn across 24 hours, it all blurred into a bizarre montage.

One of Bentley’s barbs unintentionally spoke to a principal pillar of The Lab’s reputation. Maintaining the aloofness that his routine depended on, Bentley described the atmosphere as being like a “party in a homeless guy’s mind.” Often the richest imaginations spring from limited material means, and creative invention coursed from The Lab’s history and throughout those 24 hours.

At one point, Beard engaged in conversation with V. Vale, the local independent publishing titan behind the Re/search enterprise, and called his attention to an object on stage. It was a funnel with shapes cut out of the sides and a light bulb dangling in the center, all set on a spinning turntable. Vale recognized it as a “Dreamachine,” a creation of the great independent thinker Brion Gysin. When viewed with closed eyes, the flickering light induces color phenomenon and lucid dreaming, which Gysin supposed might tap cognitive and creative potential.

For 24 hours at The Lab, the Dreamachine strobed away.