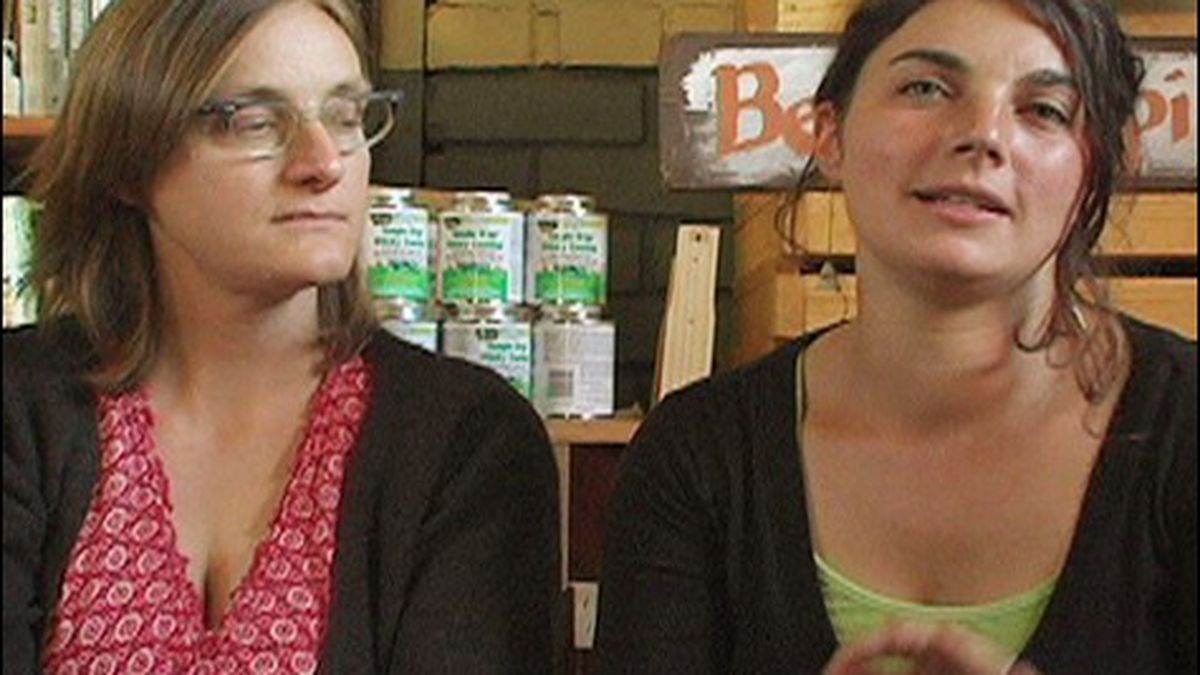 A few years ago, Berkeley filmmaker Jai Jai Noire was commiserating with her unemployed friends about the struggle to find jobs. At the same time, she was also hearing about people experimenting with a different solution: creating their own jobs by starting worker co-operatives. Mandela Foods in West Oakland, she said, was “a prime example where something was really needed in the community” and a worker co-op formed to meet the need.

Noire was enthusiastic about cooperatives because of her experience living in a housing co-op in central Berkeley. She liked the fact that everyone had a voice: “We throw the word ‘democracy’ around a lot,” she said. “But here everybody’s ideas really do count.” Besides, she added, “It’s fun! I love our workdays. I enjoy hanging around with our co-op-mates. Then, at the end of the day, when we look down at the yard and it looks great, it feels good, doing things with other people and seeing a result.”

Noire’s interest in worker cooperatives also stemmed from her own work experiences. As a singer and guitarist in the underground music scene, Noire had held a variety of day jobs — in retail, landscaping, on assembly lines, and doing housecleaning. And as a massage therapist, she had heard many clients’ stories about their workplaces. Her conclusion: “People in authority have a frightening lack of imagination about how to solve basic problems.” She believed the people actually doing the work could do better.

But Noire realized that most people aren’t familiar with worker cooperatives and have no idea how to create one. So she decided to create a resource that would help. A year and a half later, Noire — who’s also an anarchist videographer and whose previous projects include conversations with Noam Chomsky and Howard Zinn — completed a two-DVD instruction manual, This Way Out: A Guide to Starting a Worker Cooperative.

This Way Out features down-to-earth experts (a lawyer, accountant, and co-op consultant) giving clear, detailed explanations on how to create a worker co-op: setting up books, registering with the state, and much more — with helpful text summarizing important points and providing references. The DVDs also feature interviews with members of Bay Area co-ops sharing their experiences — revealing just how widespread worker-owned businesses are locally, as well as the range of industries they include.

Cristina Montanez, a worker-owner of Eco-Care, a housecleaning cooperative in Morgan Hill, describes, in Spanish, how her group got start-up capital: “WAGES [a nonprofit co-op incubator] helped us get a loan, and by collecting other funds, we were able to come up with $10,000 to start the business,” she says. “We sold tamales, held car washes, garage sales, all to get the money.”

There are also the three recent-college-graduate owners of CoSoap. In an economy where half the people who graduate from college can’t get fulltime jobs, they decided to start their own co-op, then figured out the product. “It’s a nice dream to have,” says Mike Morales, “working with your friends.” They chose soap, says Greg Elenbaas, because “the start-up costs were something we could afford and it was also something fun to do.”

The members of the BioFuel Oasis, on the other hand, were already involved in the movement to promote biofuel, so “from the beginning,” says worker-owner Melissa Hardy, “we wanted to provide a service to the community, to offer alternative fuel.”

Michael McGee, veteran member of The Cheese Board Collective, explains how the co-op includes new members, how The Cheese Board has nurtured other co-ops, and why it’s important to have bylaws that spell out “our principles: one member one vote, no hierarchy, equal pay.”

Yes, co-ops do have lots of meetings, acknowledges consultant Kate Sassoon, because “democracy requires communication and cooperation.” But, claims Jesús Mejías of The Cheese Board, “The meeting’s a good place, because we’ve learned so much about how to run [meetings] and how well [they’re] structured. Learning the process is really fascinating. Many people love to come to the meeting because we discuss very important issues — what’s going on, what we’re looking forward to for The Cheese Board to improve and to survive.”

A video, Noire said, is a natural way to learn about co-ops because viewing can be a group experience. “Reading a book is not something you can all do together,” she said. “Having people watch a movie together, people will comment and react, so they’re going to learn about each other and how it would be to work together.”

Noire said she learned some key lessons from the people she interviewed. One was the importance of close connections between the co-op and the community it serves. A Taste of Denmark, for example, is an Oakland co-op started by former workers of Neldam’s Bakery after the previous owner went out of business. Before, said Noire, “people used to come in asking for sugar-free or gluten-free products, but the owner wasn’t interested. The co-op empowered workers, as the people [who work] face-to-face with the customers, to give people what they wanted.” And that’s key to the success of the co-op — “to get feedback, to go out in your community and ask, ‘What kind of business would you like to see here?'”

As she was starting work on the DVD, Noire said, one co-op activist advised her to “make the communication and process sections really strong.” At the time, “I sort of felt like that was airy-fairy,” Noire recalled. “I wanted to talk about more important things, the nuts and bolts. As I got into it more I realized it was really critical.”

“You need to be able to work toward consensus,” says Adam Bernstein, a worker-owner of web-hosting co-op Electric Embers. “The cardinal virtues are listening and expressing yourself.” Electric Embers member Brent Emerson reflects, “I’ve learned through repeated experience that we make better decisions together. We get to see our own process of advocating for something and then committing to the other thing and finding that being wrong [is] okay because you’re part of a community of people who are all working together for the same goal.”

This Way Out, Noire emphasized, is not a documentary about co-ops, noting that there are already many on the topic, such as Democracy in the Workplace, by another Berkeley videographer, Margo Smith, and Shift Change. Noire’s DVD, by contrast, is an educational tool, a how-to manual “geared mainly to people starting a co-op with ten or less people and very little access to capital.”

This Way Out, a two-DVD package, is available for $30 plus shipping costs at Noire’s website, MightySmallFilms.com. A two-minute trailer and other related videos are available at YouTube.com/jjnoire