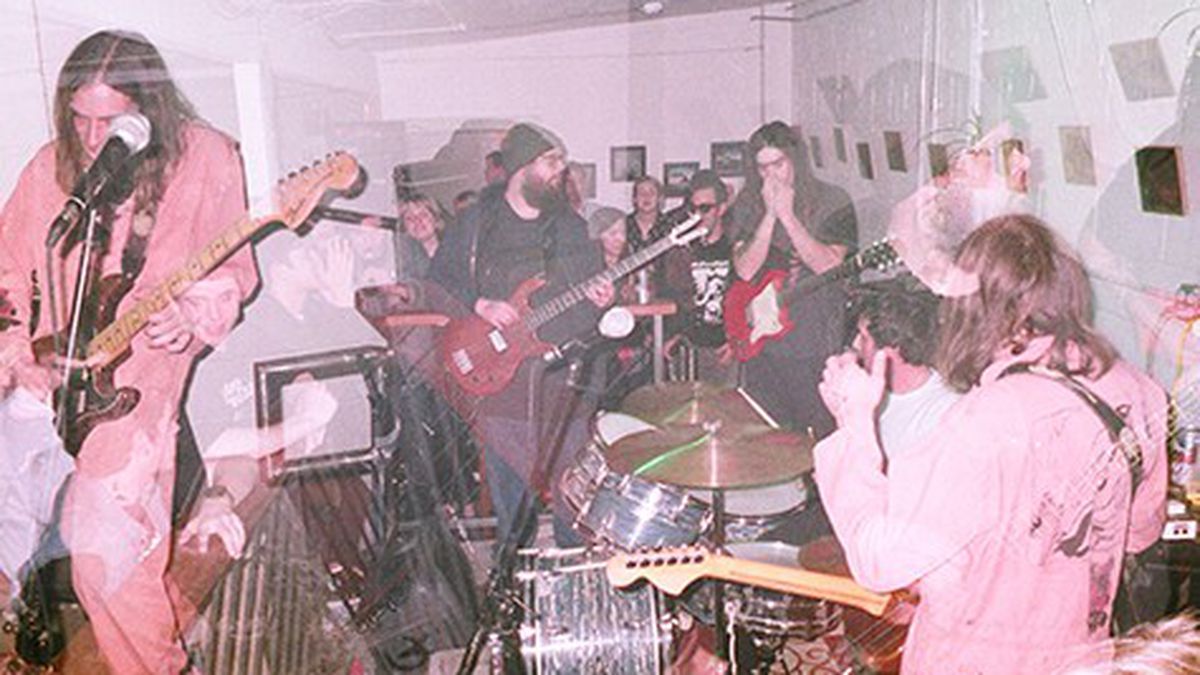 Nick O'Rooney and Ian O'Connor are evangelists of pizza and punk.

Suburban rock gigs are critical components of adolescent development. They’re great for honing prematurely jaded facial expressions, for instance, or testing the limits of how brazenly one can ingest mild intoxicants. Last week, a rented church in Santa Rosa’s sleepy downtown was the site of one such all-ages concert. A few blocks from the mall, a plastic folding table greeted kids, punks, parents, and a lot of young people who’ve yet to align with any particular tribe. Only, a few things undermined the townie battle-of-the-bands atmosphere, such as the bookish-looking indie-rock musicians with Australian accents.

They were members of Twerps, a shambolic pop outfit with a new album out on American indie heavyweight Merge Records. The headliner, meanwhile, was White Fence, Tim Presley’s punchy psych unit from Los Angeles. The international bill — which also included noted local bandleader Tony Molina and Philadelphia’s upstart power-pop foursome Sheer Mag — was a public service of the Pizza Punx, a scrappy booking collective that hosts suburban rock gigs on a caliber and scale to rival their urban counterparts.

The gig marked a two-year anniversary for the Pizza Punx, whose Ratfink-style logo adorned posters on the venue’s window. In that time, founders Ian O’Connor and Nick O’Rooney have booked more than sixty gigs at houses and other atypical venues. Pizza Punx has stirred an eclectic North Bay rock scene, added a regular stop to the West Coast routing of national touring acts, and — perhaps most impressively — enticed city-dwelling garage rock, punk, and hardcore bands eager to play in the suburbs.

All-ages shows are the rule. Illegitimate venues are the preference. The rented hall in Santa Rosa was plastered with flyers that read, “HOST AN UNDERGROUND LIVE MUSIC EVENT,” calling for new garages, living rooms, and warehouses in which to book gigs. Such bold evangelism helps account for the Pizza Punx’s ascent.

O’Connor and O’Rooney started out by cold-emailing bands who had never heard of Santa Rosa. Now, they field requests from prominent booking agencies — not that the duo acquired any other nuisances of professionalism, such as making money.

“Is someone watching the door?” O’Connor asked at the Twerps/White Fence show, glancing inside the venue. In conversation, it was a frequent refrain. The two tended to the gig with a bit of improvisation, a freewheeling style honed in part out of necessity. Neither of them drive, which poses a problem every time they’re obligated to haul PA speakers to a gig. Characteristically casual, they said it usually just works out.

Not driving is endemic to Santa Rosa youth. Two years ago, O’Rooney, 23, and O’Connor, 22, would notice each other at shows in San Francisco. They bonded over a shared hassle — finding rides to the city — and resolved to book shows closer to home as a corrective measure. Plus, that way O’Rooney, who currently fronts Creep Beat, could add his own bands to the bill. Today, the tables have turned: An online rideshare group connects urban sophisticates looking to attend Pizza Punx gigs.

Initially, O’Rooney and O’Connor sent hundreds of emails to bands they liked, offering Santa Rosa gigs. Touring acts were often willing. The usual West Coast route takes bands from San Francisco or Oakland all the way to Portland. Bands are pleased to earn a bit more money before the costly trek. Openers were harder to come by, because Oakland and San Francisco acts were wary, and native Santa Rosa acts were finite. Both of those things have since changed.

At the anniversary gig, even Tony Molina — an avowed West Bay supremacist — mustered a hat-tip. “It’s good to be back in the 707,” he said from stage. “Shouts out to Capitalist Casualties,” he added, referencing the power-violence act from Santa Rosa that rose to prominence in the 1990s.

Max Wickham, a San Francisco native and member of Face the Rail, among other bands, was also in attendance that night. He put it succinctly: “These guys stepped up and created a scene out of nothing.”

This isn’t to say that the North Bay was a musical wasteland before the Pizza Punx: Its hardcore bands were legion. In 2010, the prominent hardcore label Bridge 9 Records released Ceremony’s Rohnert Park EP, named for a town adjacent to Santa Rosa, and then the band landed a coveted spot on Matador Records and pivoted toward post-punk.

Ceremony, which remains the area’s best-known export in recent years, headlined one of the biggest Pizza Punx shows last year. It bridged eras, and the duo cited the show’s impact as a sign of success. “This band, Acrylics, said they started the band because of the Ceremony show we threw,” O’Rooney said. “That’s why we do this.”

Michael Bingham, who grew up in the North Bay, currently fronts Creative Adult, one of the openers at the Ceremony show. Like O’Rooney and O’Connor, he remembered the Aughts’ North Bay hardcore scene being somewhat homogenous. Pizza Punx, he said in an interview, helped foster greater diversity.

“It was mostly certain sorts of hardcore bands coming through before. There wasn’t much punk or garage really.” Bingham continued, “It got blown wide open. It was like everyone in a hardcore band started taking acid, listening to other kinds of music, and now everyone’s playing these different rock ‘n’ roll styles.”

Still, O’Connor and O’Rooney downplayed their own roles in all this. “We’re not caught up on some ego shit,” O’Connor said. True to form, they go by the pseudonyms Papa Pizza and Sergeant Salami, but it’s a symbolic effort — most attendees at the anniversary gig appeared to know them personally. “We’re just a catalyst for this to happen,” O’Connor said, gesturing toward the show. They floated a couple ideas for the future of Pizza Punx — like opening a record store or rehearsal spaces — but neither seemed particularly committed to staying in the North Bay. Might Santa Rosa remain a destination without them?

“It would be cool to pass the torch,” O’Rooney said. “But even if we did, it probably wouldn’t be the same.”

Tuesday Must Read: Oakland Has a History of Hiring and Then...