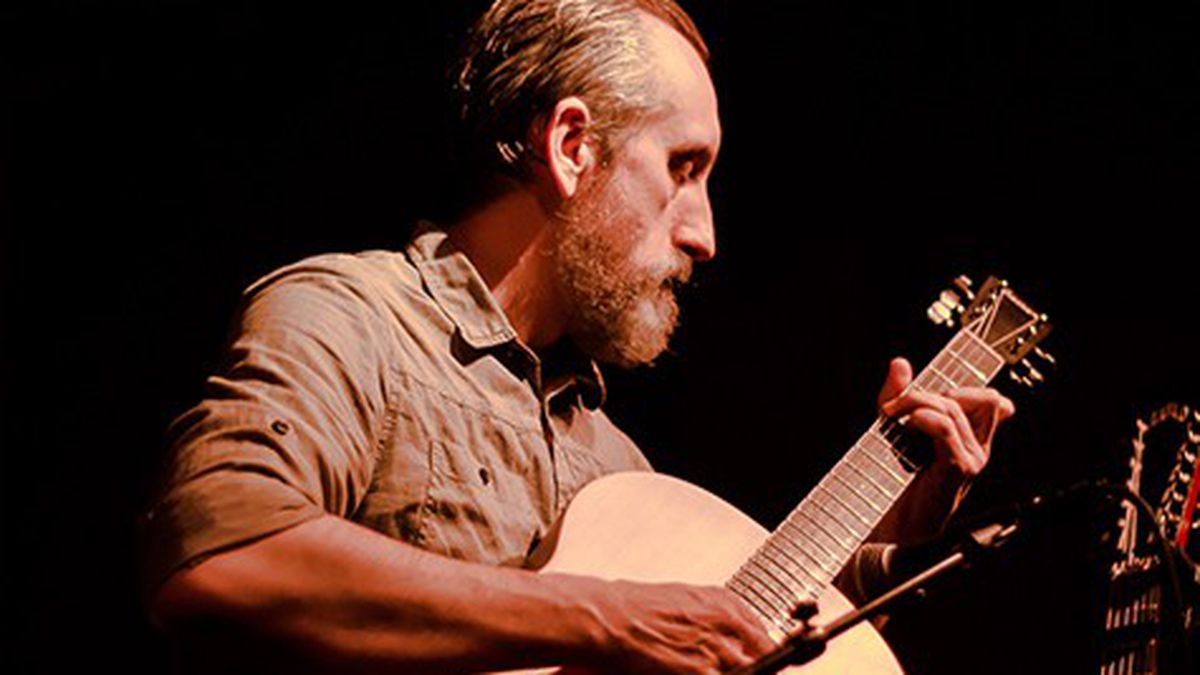 The North Carolina native helms a series at Studio Grand and contributes to Tompkins Square compilations.

Crows, ravens, and their broader corvid family represent a profound symbol for Oakland guitarist Chuck Johnson. Johnson’s third album, Blood Moon Boulder, is due this summer, following 2013’s Crows in the Basilica. The opening track, a seventeen-minute lap steel guitar excursion is aptly named “Corvid Tactics.” While the title might summon images of The Birds actress Tippi Hedren being nibbled to death in Sonoma County, the music is meditative and supremely picked. It’s in line with the so-called “American primitive” guitar tradition — which is indebted to John Fahey and lately enjoying a national uptick thanks to players such as Daniel Bachman — though for Johnson, it harks back to a sojourn through Europe.

“Crows in the Basilica is really connected to the image on the front cover, which is a photo I took when I was standing in a basilica in Turkey,” he said in an interview. “It’s basically ruins on the top of a hill, and there was a massive murder of crows there when I was visiting. … These animals have an intelligence that humans can’t really grasp.”

Johnson moved to the East Bay from his native Chapel Hill, North Carolina in 2007. He was attracted not to the area’s reputation for folk, but by Mills College and the institution’s distinction among the experimental music set.

“While I was there, I pretty much focused on electronic music,” he said of his two-year academic stint. “When I finished [my masters’ degree], it wasn’t that I wanted to take a break from electronic music, it was more that … I was into sound and texture and tuning, and wanted to apply it to the guitar because the instrument has that sort of resonance.”

That thinking inspired the Little Nicky’s concert series, which Johnson runs, along with another Mills-affiliated musician, Noah Phillips. The monthly series sets Johnson’s solo acoustic acumen within Studio Grand‘s white reverberant walls, in which the minutiae of his instrument’s incidental sound becomes an important aspect of the performance.

The upcoming Little Nicky’s show on April 13 pairs Johnson with a headlining solo set from Slowdive drummer Simon Scott. It’s the release event for the seventh installment of Imaginational Anthem, a compilation series produced by the local label Tompkins Square, which has received widespread acclaim for showcasing maverick acoustic guitar players of the past and present. Johnson contributed to the label’s 2010 compilation Beyond Berkeley Guitar, and the latest Imaginational Anthem opens with his “On a Slow Passing Through a Ghost Town.” With a melodic statement reminiscent of British folk, the six-minute track bounds toward an almost chaotic middle portion before gracefully returning to its initial bucolic intent.

The antecedent of Little Nicky’s, however, came during the 1990s in the form of the Shortwave series Johnson helmed in North Carolina.

“The idea was to have a series to present touring musicians, or a platform for local musicians to play music that would be outside of indie rock, which was pretty much the only kind of music you’d see in Chapel Hill,” Johnson recalled.

As a guitarist, Johnson has shuttled between genres for about twenty years, touching on the high-contrast indie instrumentals he worked up as a member of Shark Quest and worldly acoustic psychedelia with Idyll Swords. That entire time, Johnson also worked on solo acoustic material, but wasn’t prepared to release a solo guitar album until 2009.

His preparation coincided with the conclusion of his academic coursework, allowing for more practice time, and solidifying the fingerpicking style he had been honing. Johnson’s acoustic focus isn’t a rejection of his education, however: He still relies on electronic concepts that he picked up at Mills, especially those of Pauline Oliveros, the first director of the Mills Center for Contemporary Music, then known as the Tape Music Center.

“On some level, I’m always thinking about it,” he said, discussing Oliveros’ deep listening theory. “It’s about being aware of your world and its sounds.”

And maybe that’s part of why Johnson settled in the Bay Area. It doesn’t have the bustle of New York or Chicago, but there’s always some commotion for Johnson to draw from — such as traffic buzzing up and down Telegraph Avenue or the wind whipping at the Berkeley Marina. “There’s always a composition happening around you,” as Johnson put it, “whether you’re listening or not.”