.How Cyclists On Telegraph Mean Business

Oakland is working to make a major thoroughfare in the city more bike-friendly — and if the redesign is successful, local merchants will benefit. 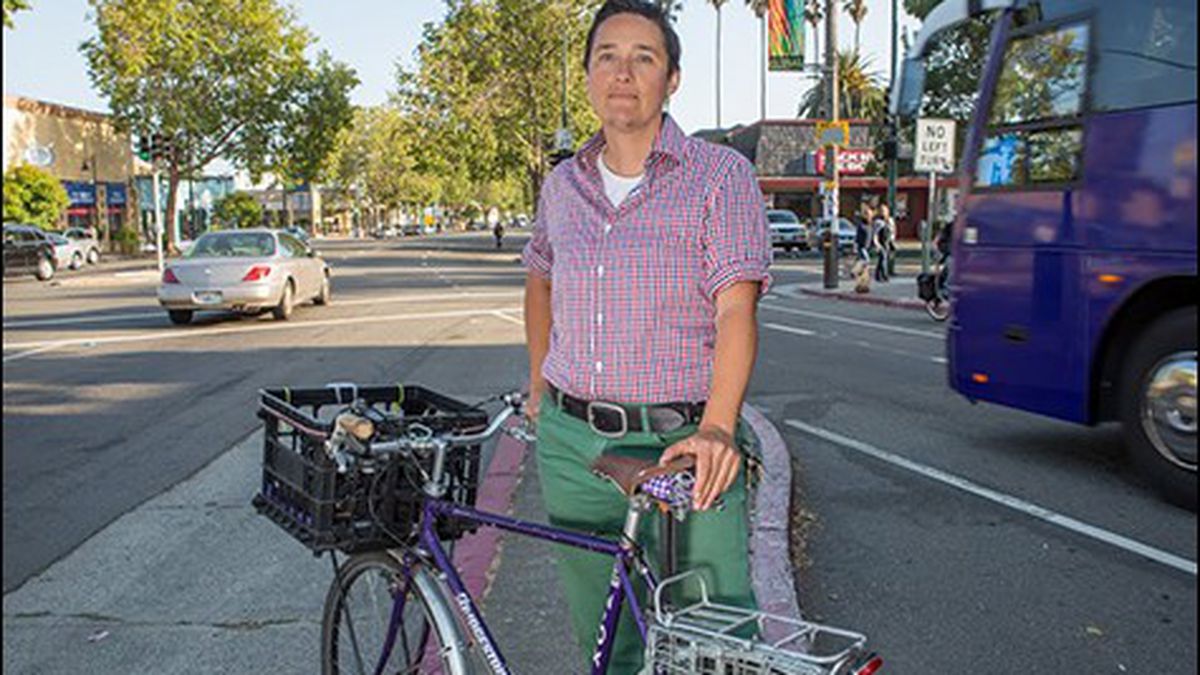 Despite the fact that it has no bike lane, Telegraph Avenue is one of the most popular routes for cyclists in Oakland. According to city estimates, more than 1,200 cyclists ride Telegraph Avenue every day, competing with cars and buses for space on the busy street. As part of a substantial redesign of this corridor — a critical north-south route that connects downtown Oakland to the Temescal district to Berkeley — officials hope to make the roadway safer for biking. And if they do it right, it’s not just cyclists who will benefit.

In recent years, research in the Bay Area and across the country has increasingly demonstrated the positive impact that new bike lanes bring to neighborhoods. Notably, an improved roadway for bikes often equates to increased business for local retailers.

“If people are avoiding riding on Telegraph, they are not going to pass through the business district and have that impulse stop,” said Renee Rivera, executive director of Bike East Bay, the local cycling advocacy group that has been lobbying for improved bike infrastructure on Telegraph Avenue. “That’s what’s so great about biking. It’s really easy to stop and shop. And that premise has been proven by studies in a number of different cities.”

The positive correlation between biking and business may seem obvious to full-time cyclists. But for business owners concerned about trading parking spaces for bike lanes, it’s not always an easy sell. In Oakland, the so-called Telegraph Avenue Complete Streets Implementation Plan could involve any number of improvements, including the creation of a separated bike lane. The planning, however, is in a preliminary stage, with the city on track to release a concept design later this summer. The proposal would be subject to approval from the city council, said Kristine Shaff, Oakland Public Works spokesperson. Implementation would happen sometime after that, likely in phases, she said.

In the meantime, cycling advocates are working to convince merchants that their fears of bike lanes are unfounded. And they’ve got the numbers to prove it.

In February 2013, the Oregon Transportation Research and Education Consortium at Portland State University released a study demonstrating the economic value of supporting cyclists. The report examined the relationship between transportation modes and consumer choices based on extensive surveys in the Portland metro region. What the researchers found was that on a monthly basis, cyclists spend more money on average than those who drive. That’s because cyclists generally make more trips than drivers, which means that, over time, they end up spending more than drivers at a range of different kinds of establishments.

“People who arrive by bike are competitive customers,” said Justin Carinci, communications director for the consortium. “In some cases, they are spending more when you look at it on a monthly basis. What’s really interesting is that they tend to make more trips. If you’re a business owner, that means you have more chances to interact with a person … and tell them about new products and build up loyalty to your establishment.” In other words, Carinci said, when cities fail to make certain key roadways accessible and attractive to cyclists (and pedestrians, for that matter), “then we’re missing out on a potentially larger chunk of spending per person.”

In recent years, reports have also illustrated economic gains specifically associated with the construction of new bike lanes and parking corrals. Last week, the same research group at Portland State University released a report on five cities that have implemented protected biking lanes — that is, cycling roadways that are physically separated from vehicle traffic by a curb or another kind of buffer. Unsurprisingly, the researchers found that within one year of lane installation, these streets experienced a surge in ridership, ranging from 21 to 171 percent (jumps that are greater than overall increases in the number of cyclists in those cities during the same timeframe). The lanes attract new riders — people who otherwise would not have biked — as well as cyclists diverted from nearby streets, the study said.

And if a lane is built on a commercial corridor, it can potentially bring in a more diverse clientele. When protected lanes are implemented, it opens the doors to different types of cyclists, said Rivera. “It’s not just that there are more people riding. It’s a greater range of people … more kids, a greater range of ages, much more diverse. It feels more like everybody.” On a corridor like Telegraph Avenue, she added, bike lanes would reduce car traffic and speeds and “make the street feel more livable — make it more of a place where you want to stop.”

The new Portland State survey of protected bike lanes highlighted several economic benefits in each of the study cities, including San Francisco. According to the study’s surveys, 43 percent of residents said the lanes increased the desirability of living in their neighborhood, as opposed to 14 percent who said it decreased desirability. Additionally, 20 percent of residents who ride bikes on the identified streets said the installation of lanes increased the frequency of their shopping, while a very small percentage said it decreased shopping trips. Most said it did not change their spending habits. The report echoes the findings of municipal research across the country. For example, a 2012 study by New York City’s transportation department found that the implementation of protected bike lanes in one part of Manhattan correlated with a 49 percent increase in retail sales.

San Francisco has increasingly demonstrated the value of bike lanes and the growing interest in cycling. Two-thirds of Valencia Street business owners said that when the city reduced car lanes and installed bike lanes on the street, a main thoroughfare in the Mission District, their business improved, according to a San Francisco State University report. Only 4 percent said the changes hurt sales. Additionally, more than two-thirds of employers also said the Valencia bike lanes added convenience for their employees. This touches on another proven benefit to local economies: Companies located in downtown centers across the country attract younger employees better if their offices are easily accessible by bike, according to a recent joint report by PeopleForBikes and the Alliance for Biking and Walking.

When the debate about the Valencia Street bike lanes first began, “People were so worried it would decimate the businesses,” said Kristin Smith, San Francisco Bicycle Coalition communications director. “Obviously, Valencia Street is not struggling.” San Francisco installed those lanes in 1999, and since then perceptions have shifted in favor of bike lanes. “We do see much more support,” she said, adding that there is, however, lingering resistance from merchants concerned about car parking.

But in a city like San Francisco, the reality is that sacrificing parking spots for a bike lane is a good bet for business, Smith argued, pointing to a recent survey of hundreds of people on Polk Street, a key north-south route. That study, conducted by the San Francisco Municipal Transportation Agency, found that more than 75 percent of people on Polk Street do not travel by car and that people who ride bikes or public transit or walk all spend more per week in the area than drivers. This benefit is clearly illustrated by the overflowing bike corrals that dot the city, Smith said. “Those people are going to the restaurants and shops. You just get more of a thriving, engaging commercial corridor.” Improved cycling access on Polk Street is a matter of safety, too. On average, one pedestrian and one cyclist are hit by a car every month on Polk Street, according to the city.

The list of economic benefits of biking goes on and on. Better cycling opportunities can boost tourism, according to a 2012 report from the League of American Bicyclists and the Alliance for Biking and Walking, which reviewed a number of studies across the country demonstrating the value of “bicycling tourists.” That report also argued that people on bikes save money on travel and thus have more money to spend on local businesses.

In Oakland, it remains to be seen how exactly the city will redesign Telegraph Avenue — and whether bike improvements will face any substantial opposition from merchants. In April, the city released a report outlining potential roadway design options, ranging from simply adding shared lane markings for bikes to removing car parking spots or a vehicle lane to make way for a dedicated bike lane. Shaff, the public works spokesperson, emphasized that cycling is just one consideration: “This project is really for roadway safety. Safer streets means safer for everybody and all uses. It’s a major corridor, so it needs to be safe for drivers. It needs to be safe for pedestrians. And it needs to be safe and accessible for bikes.”

Bike East Bay has been meeting with local merchants to discuss the potential changes and has already identified roughly eighty businesses on Telegraph Avenue that favor a new bikeway on the corridor (see BikeEastBay.org/telegraph).

For Stephanie Sockel, general manager of Marc 49, a Telegraph Avenue wine bar, improved bike access is a no-brainer. For starters, it’s a matter of safety: Two of her employees who bike to work have been hit by cars, she said. Sockel also predicted that a Telegraph bike lane would also improve business. “I really think it will give us better curb appeal, honestly. People riding bikes are able to see businesses a bit closer,” she said, adding that a bikeway would enable more patrons to get to her bar. “That will increase the options for people who don’t drive cars or are trying to drive their cars less.”