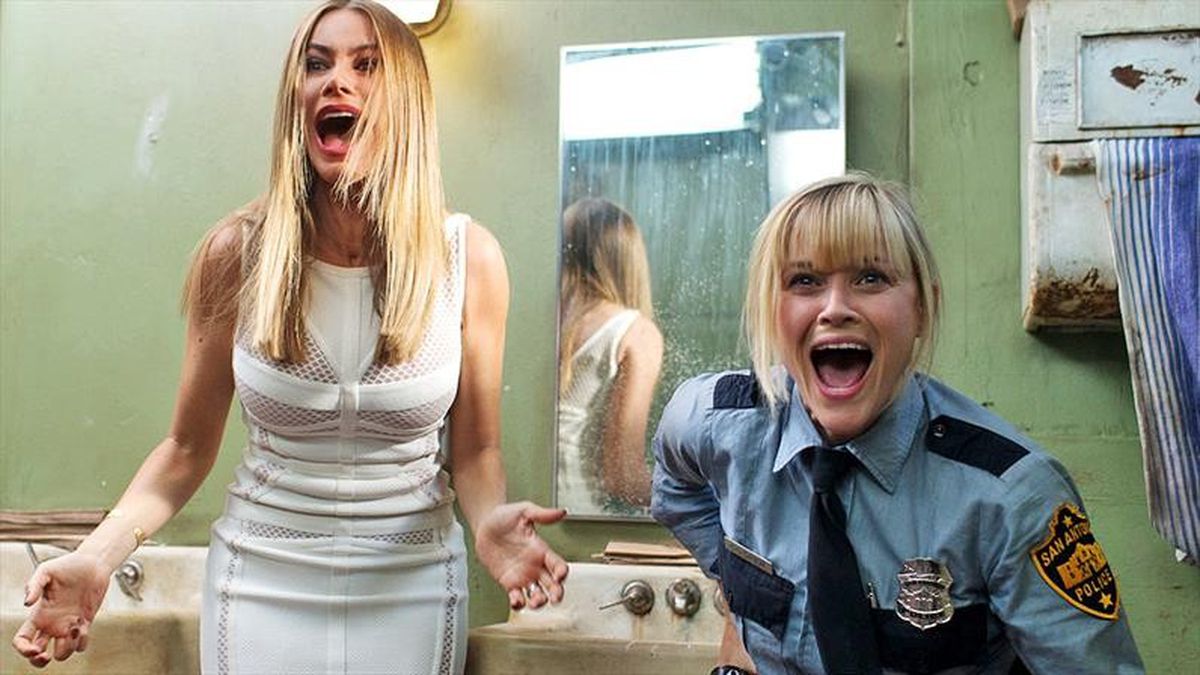 Hot Pursuit: The Funniest Comedy of the Season

How could anything as lightweight and predictable as Hot Pursuit be so hilarious? Because it has Reese Witherspoon and Sofía Vergara in it. Witherspoon, playing an uptight police officer, and Vergara, as the ditzy (what else?) wife of a druglord, leave it all on the highway in director Anne Fletcher’s “topical” comic actioner. All by themselves, they lift their hackneyed vehicle to heights of exhilarating ridiculousness — a state that’s not so easily reached, even in easily led 2015. Their rambunctious chase adventure is the funniest comedy of the season.

Witherspoon’s Officer Cooper (her first name doesn’t become an issue until late in the movie) is a cop’s daughter who’s even stricter and more by-the-book than her late father. By her own admission, she’s “hyper-focused,” and takes everything so seriously she’s the laughing stock of fellow officers in the San Antonio PD, who tease her about the time she Tasered a harmless drunk because she thought he had a shotgun. So when Cooper’s captain (perennial everyman John Carroll Lynch) orders her to provide security for the wife of a federal drug-case witness en route to testify in Dallas, the petite law enforcer hops to it with the ferocity of a terrier who lapped up too much spilled Red Bull.

From her earliest roles in such films as Freeway and Election, Witherspoon has always relied on her authenticity, both as a Southerner (an Army brat, she was raised in Tennessee) and as a tough-minded female action figure hell-bent on getting her way. Hot Pursuit’s screenplay — written by TV sitcom vets David Feeney and John Quaintance, and directed by choreographer-turned filmmaker Fletcher — is completely tailored to Witherspoon’s specifications. Naturally. She’s the film’s producer.

As seen from Cooper’s point of view, the story is one of slow awakening. First, she’s forced to interact with her polar opposite, Vergara’s pampered trophy wife Daniella Riva, then with the idea that some of her fellow cops are in cahoots with the narcotraficantes. Finally, the unlucky-at-love Cooper bumps into a guy who actually likes her style — Randy, an ex-con played by English actor Robert Kazinsky. So she learns a few things about herself while being chased across Texas by hitmen and rogue po-pos. Sample dialogue from the Cooper lexicon: “I feel like the cheese fell off my cracker.” Only Reese Witherspoon could make us laugh at a line like that.

The collision of Cooper and Mrs. Riva makes for instant soundbite hilarity, raunched up just a tad from cable-TV norms. Otherwise, Vergara doesn’t deviate one millimeter from her patented “brassy-Latina-motormouth” image — nonstop Spanglish putdowns of the tiny whitebread girl sent to guard her, an overreliance on high heels (especially the ones in that suitcase she never lets go of), and complete confidence in her ability to hustle her way out of a jam by leaning in and flashing her cleavage. The running gag is that Mrs. Riva is not as dumb as she pretends to be, and that Cooper is really not as much of a hick as she tries to be. One or two of Vergara and Witherspoon’s set pieces are particularly tangy. The menstrual-emergency routine outside the biker bar (yes, what female-fugitive flick would be complete without bikers?) and the girls’ “lusty lesbian” bamboozlement of a klutzy horse rancher (Jim Gaffigan) stand out for inspired silliness.

Witherspoon and Vergara’s fire-and-ice shtick is corny but genuinely charming. It gives us the pleasurable shock of seeing a pair of actresses we know well pulling something new out of their purses – in Cooper’s case, her whopper of a service revolver. What other comic actress could get away with having her character – in a hurry for some getaway clothes — making use of the middle of a revolving store rack for a fitting room? On the heels of Wild and Inherent Vice, Witherspoon hits her mid-career stride like a Texas twister.