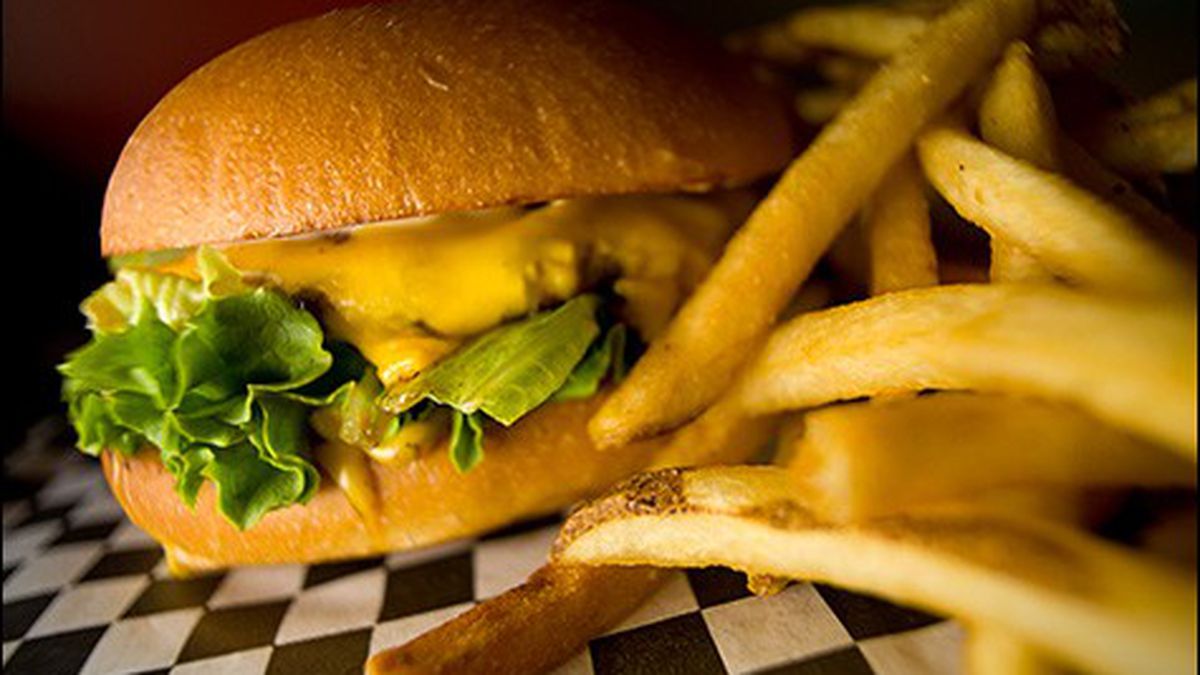 At Crossburgers, a new burger joint in downtown Oakland, the crossness of the restaurant’s signature burger lies in a habanero-laced “secret sauce” whose kick is potent enough, according to chef-owner Eddie Blyden, to cause diners to give their lunch a sidelong glance and exclaim, What are you so cross about, burger?

That’s how Blyden tells it, anyway. It’s hard not to be charmed by a chef who anthropomorphizes his creations with such aplomb. Having spent the past several years cooking at hotel restaurants (Henry’s, at the Hotel Durant, and the now-shuttered Miss Pearl’s Jam House), Blyden said he got tired of that three-meal-services-a-day grind. When it came time to open his own place, Blyden figured he’d keep it simple. Located in a central spot on Frank H. Ogawa Plaza, with an outdoor patio perfect for people-watching, Crossburgers serves just one meal a day and has an office-lunch-friendly menu that seems tailor-made to keep all those public employees who work across the quad in City Hall happy.

One advantage of being head chef at a casual burger joint: You’re not squirreled away in the deep recesses of a big restaurant kitchen. Rocking a shaved head, white short-sleeve button-down, white apron, and scuffed-up white sneakers — his daily uniform — Blyden is front and center at Crossburgers: expediting orders, bussing tables, and, more than anything, chatting it up with customers, at least half of whom he seems to know personally.

The restaurant’s concept, broadly defined, is Northern California Diner — burgers and other fast-food fare with a handful of farmers’-market-driven, Slow Food-style embellishments: kale slaw on the sandwiches, seasonal soups, and Niman Ranch hot dogs. To wit: Beets and goat cheese comprise an actual salad on the menu, not just shorthand for the kind of farm-fresh approach that the Bay Area is occasionally mocked for.

None of this is particularly novel. But there is an appealing playfulness to the menu, which is rife with secret sauces and fun, hybridized versions of things like a Cuban sandwich and a chili-topped Coney Island Hot Dog. Blyden said he’s working on a new burger called the “Cross Dresser.” The restaurant’s color scheme is mustard-yellow and ketchup-red. It’s that kind of a place.

And while Oakland has no shortage of stellar burgers, the downtown area — and the few blocks on either side of City Hall in particular — is a surprising dead zone for lunch-breakers who want something better than a Big Mac but don’t want to splurge on a $14 sit-down burger (at Tribune Tavern, for instance).

So, as the long lines during each of my visits can attest, Crossburgers fills a niche. As for the burgers themselves: They were pretty good. For $7.99 (plus an extra $3 for fries and a fountain drink), the signature Crossburger boasts the kind of thoughtfully conceived components that you might expect at a slightly fancier restaurant: a soft, eggy challah bun; oozy melted American cheese (a throwback) that melds perfectly with the beef patty; and two house-made sauces — the Cross Sauce (a zesty, umami-rich soy-sauce-and-lime-juice aioli) and the “secret” sauce (a slow-cooked mixture of tomatoes, habanero chilies, fresh herbs, and beer), which gives the burger its red-hot “crossness.” The regular cheeseburger features a more traditional combination of meltingly tender confit onions; sweet crunchy pickles; and fresher-than-usual lettuce and tomatoes.

It should be said, however, that amid all the toppings and condiments, the actual beef (which Blyden said is high quality, and custom-ground for him daily) gets kind of lost. The burgers all have a very thin five-ounce beef patty that gets seared on the flat-top, to medium unless you specify otherwise, but every burger I ordered came out medium-well — gray all the way through and, frankly, a little bit dry. The sauces helped make up for that deficit, but in the future I’ll make a point of requesting a more rare burger.

Meanwhile, the restaurant’s California-cation of various classic American foods was more successful in some dishes than others. I liked the bright, lemony (and anchovy-less) dressing on the Caesar salad, whose only fault was that it seemed somewhat pricey (at $8.50) for something intended to be a side dish. On the other hand, the inclusion of a kale slaw instead of traditional coleslaw in the (otherwise excellent) catfish po’boy was a distracting substitution: The kale lacked the brightness and crunch that were needed as a foil to the airy fried fish, instead adding a chewy, stuck-in-your-teeth element.

And the main innovation of the Crosscuban, Blyden’s take on a Cuban sandwich, was its inclusion of a pork-sausage patty instead of the roasted pork shoulder you’d normally find in such a sandwich — in other words, the substitution of a lush, moist element with one that was dry and exceedingly peppery.

That’s not to say that there weren’t items that soared at Crossburgers. The black-eyed pea chili, made with smoked ham hocks and ground chuck, is simply phenomenal — perfectly balanced between soupy and chunky, with enough heat to make me sweat. The use of black-eyed peas instead of kidney beans or black beans meant this wasn’t as starchy (or gas-inducing) as a traditional chili, and the toppings — melted cheese, house-pickled jalapenos, and fresh cilantro — were pitch perfect.

And although the potatoes aren’t cut fresh in-house, the French fries were excellent — piping-hot, well seasoned, and, dare I say it, slightly reminiscent of McDonald’s fries (without all the associated guilt). A single portion is easily big enough for two to share.

Come to think of it, even though chili cheese fries aren’t a regular menu item, I can’t think of a better guilty-pleasure lunch than an order of fries and that chili.

For now, Crossburgers only serves lunch, but with a beer and wine license expected to come through in the next couple months, Blyden plans to add a happy hour that’ll extend into the early evenings. Blyden said he’s on friendly terms with every brewmaster in the Bay Area, and damn if that Crossburger doesn’t beg for a cold beer.