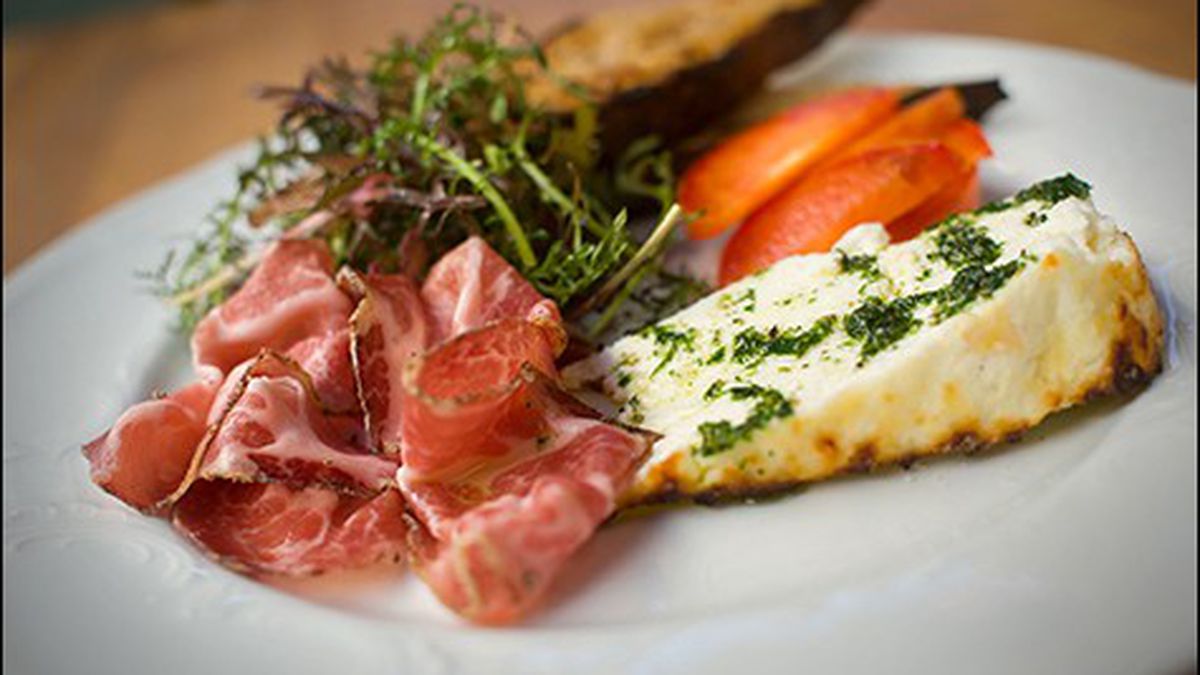 When you walk into Homestead, the new farm-to-table restaurant on Oakland’s Piedmont Avenue, the first thing that comes to mind probably isn’t frontier life.

Perhaps you’ll notice the sunniness of the high-ceilinged space and the many jars of colorful spices that face the front of the restaurant. You might remark upon the “farmhouse-chic” decor, complete with whisk-shaped light fixtures, a hollowed-out ancient tome wherein the hostess-stand iPad is hidden, and a life-size bronze piglet doorstop. And if you sit in the main dining area, your eyes can’t help but be drawn toward the custom-designed wood-burning fireplace, which is the central feature of the restaurant’s open kitchen — and, in front of that, the assorted platters of raw ingredients (a plate of blood-red steaks, a bowl filled with baby carrots, a pile of plump cucumbers), all laid out on the counter like subjects for a particularly vivid and hunger-inducing still-life portrait.

Even though Fred and Elizabeth Sassen, the husband-and-wife co-owners and chefs, intend Homestead to be a casual neighborhood restaurant — where the entire staff, from the servers to the chefs, wears jeans — there’s no question that they’re also providing an upscale dining experience.

Still, “Homestead” isn’t just another quaint, hipsterish name. Like most great restaurants, Homestead has a cool origin story, one that dates back to early 1900s, when Elizabeth Sassen’s great-grandparents emigrated from Norway to partake in the Homestead Acts. The laws granted enterprising families a plot of land — out on the Western frontier — that would be theirs to keep, free of charge, if they lived on, and worked, that land for a certain number of years. (Sassen said she still has family that lives on that old homestead, in Wyoming.)

And so, when the Sassens were planning their first restaurant, they decided to draw inspiration from the pioneer work ethic of those original homesteaders, who, to survive that first harsh winter, had to muster all their from-scratch food preparation and preservation know-how. This isn’t idle talk. At Homestead, the Sassens not only produce a wide variety of charcuterie (which, granted, is now par for the course), they also preserve the tomatoes, dry the chili peppers, and make their own vinegars and cheeses. Eventually, they plan to bake all of their breads in-house as well. And while this kind of extreme DIY approach can sometimes feel a bit precious, at Homestead, the food is just really, really good.

Take something as simple as the little complimentary tub of soft butter that comes with thick slices of rustic bread to start your meal. The butter was churned in-house, and, more importantly, was some of the best butter I’ve had — slightly tangy with a nice hit of Celtic sea salt.

A baked ricotta appetizer, meanwhile, represented the Sassens’ initial foray into cheesemaking, and the ricotta itself is a lovely thing: a thick wedge that’s crisp and toasty at the edges — not gooey or dip-like — but still firm and slightly crumbly, topped with a savory pesto-like herb sauce. We spread the cheese on grilled bread and ate it with slices of fresh pluot and a wonderfully fatty house-made Meyer lemon salami, sliced almost paper-thin — a lovely little antipasto spread. I could imagine requesting a double order and just having that for dinner.

As noted, the restaurant’s centerpiece is its wood-burning hearth, which functions as an oven, grill, and smoker. At any given moment, you might see several big hunks of meat roasting, vegetables being grilled whole, and a cast-iron pot filled with some lovingly-slow-cooked thing. Any dish that’s spent some time in that fire is likely to be pretty good. One of my favorites was a plate of duck confit, which was presented in a rustic style, the meat pulled off of the bone, the skin just slightly crisp. The payoff was that it was also the juiciest, most tender duck confit I can recall eating, the fat slowly rendered in such a way that you wound up with these decadent, jiggly bits in every bite. Paired with bitter chicory leaves, Marcona almonds, and intensely sweet Syrah grapes, the dish hit every part of my palate.

Just as nice was a plate of roasted pork — both the tender, thinly sliced loin and the fatty belly, served next to a pool of rich creamed corn and a pile of cherry tomatoes that had been spiked with sherry vinegar for an extra hit of acidity. Get a little bit of every component in each bite and you wind up with another explosion of flavors.

Same goes for the grilled rib-eye steak: four thick slices served perfectly medium-rare. Even more than the other entrées, every element of this dish was imbued with a deep smokiness from the hearth — the steak itself, the side of roasted baby carrots, and the charred escarole, which had been cooked whole on the grill. To gild the lily, the steak was topped with a little knob of what appeared to be herb butter, but turned out to be pure beef marrow, processed through a food mill, adding an extra bit of richness.

This is home cooking elevated to high art. I can’t think of too many chefs who are doing this kind of deceptively simple, French-inflected, ingredient-focused style of cuisine better — and with more heart — than this husband-and-wife team.

While Homestead isn’t an inexpensive restaurant, there are decent values to be found on each section of the menu. (Hello, $7 wines by the glass!) And the service strikes the right balance — it’s warm and attentive, yet totally low-key.

Even though simplicity is the hallmark of California cuisine, what really excites me about Homestead is a certain playfulness. Take, for instance, the insanely delicious s’mores chocolate pudding, which was the perfect amalgamation of contrasting flavors (sweet pudding and slightly salty graham crackers), temperatures (warm and cool), and textures (crisp, gooey, and smooth). But what made the dessert is the marshmallow-y toasted meringue, made with ground lapchang souchong, a smoked tea. Bite in and, like magic, you’re hit with a deep, deep smokiness, like you’ve ingested the entire campfire.